Café is closing after 29 years 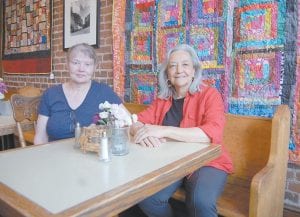 SAYING GOOD-BYE AFTER 29 YEARS — Courthouse Café owners Laura Schuster (left) and Josephine Richardson were photographed in the restaurant Tuesday after talking about their years of operating the Whitesburg restaurant, which will close for business on Friday. The restaurant, located at the corner of Main Street and North Webb Street, shares space with Richardson’s gift shop, The Cozy Corner, which will remain open. (Photo by Sally Barto)

Courthouse Café owners Josephine Richardson and Laura Schuster have watched businesses open in downtown Whitesburg and later close after struggling to make it.

“A number of places tried and couldn’t continue, “ said Richardson. “It just wasn’t viable. We have hung on for a long time.”

After 29 years of serving lunch and dinner on the corner of Main Street and North Webb Avenue, Richardson and Schuster have decided to close their restaurant.

“It’s just the right time to do it,” said Richardson. “We’ve been talking about it since January. This is the time that things are falling into place for us.”

The restaurant’s Alcoholic Beverage Control (ABC) license is up for renewal at the end of this month and Richardson said it didn’t make sense to renew the license if it was uncertain how long the Courthouse Café would remain open.

The Courthouse Café was one of the first in Whitesburg to obtain a liquor license. The restaurant primarily sold wine, beer and bourbon. 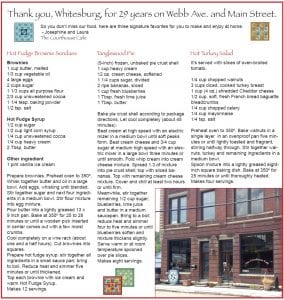 “Our dinner business did pick up with the alcohol,” said Richardson. “That liquor license was a good thing for us and for the town.”

The restaurant began suffering a small decline in business in the late 1990’s when Mountain Comprehensive Health Corporation moved out of downtown to West Whitesburg and the post office relocated from the middle of Main Street to Pine Mountain Junction. With downtown foot traffic noticeably declined, fewer people began placing orders to take home after work.

“Town has changed,” she said. “It’s been going down for the last few years. When the economy started dropping, we could see a definite change.”

Richardson said other factors, including a lack of easy parking, might also have contributed to the problem of fewer customers.

“ Maybe our menus didn’t change with the times,” she said.

The building where the Courthouse Café is located was built in 1911 and originally housed a bank. Before prohibition it was transformed into a tavern called The Cozy Corner. At one time, one portion of the building was a barbershop while another portion served as a bus station and lunch counter that went by the name The Cozy Corner.

Part of the building was used as a shoe store, a furniture store and later a tire store before the Appalachian Film Workshop, now known as Appalshop, was formed in the space in September of 1969. Josephine Richardson’s husband, Whitesburg architect Bill Richardson, started the organization with a grant from the federal Office of Economic Opportunity. The Richardsons had met at Yale University two years before and decided to move from New Haven, Conn., to Whitesburg. Bill Richardson had spent a summer in Letcher County working as a student architect and convinced his wife to sublease their apartment and take a leave from her work as a social worker.

During home visits while working here for a local home health agency, Richardson noticed baskets, quilts and other items people were making in Letcher County and in November 1973 decided to open a bookstore and crafts shop in which people could sell their quilts and crafts. After Mrs. Richardson obtained the space, which was located adjacent to the film workshop, someone suggested she keep the name The Cozy Corner. In addition to literature about Appalachia, Richardson sells locally made items. The Cozy Corner will remain open after the restaurant closes.

Schuster, of Frankfort, became familiar with Letcher County while working at the Backwoods Community Center in Hazard as a VISTA volunteer in the University Year for Action program through the University of Kentucky in the early ‘70s. In 1976, she was hired as a typesetter for The Mountain Eagle.

Richardson also worked parttime at The Eagle, where she wrote a food column, “Good Eating,” and started an entertainment page that remains part of the paper today.

Schuster, who also worked at Appalshop for eight years distributing films and building archives, met Richardson through a mutual friend at the Backwoods Center.

“We used to cook a lot together,” said Richardson, who specializes in Italian cuisine. Her father was from southern Italy and her mother’s family was from Amalfi Post, Italy.

With a lack of restaurants in Whitesburg in the early ‘80s, Richardson and Schuster often hosted dinner parties for visitors, professionals and potential financial donors of Appalshop. At a Thanksgiving dinner for 40 people, someone suggested that Schuster and Richardson open a restaurant.

Soon after, Kaye and Greg Amburgey opened The Cranberry Basket restaurant adjacent to The Cozy Corner. Fourteen months later, in 1985, Richardson and Schuster bought the restaurant.

“It just seemed like the thing to do at the time,” said Richardson.

Richardson had previous restaurant experience working as a hostess in New Haven and Boston, Mass. While a student at UK, Schuster cooked at the wellregarded Alfalfa’s in Lexington.

When the Courthouse Café first opened, it served lunch Monday through Friday. After two years, dinner was added. The restaurant also catered a large number of parties and other events.

“I think the favorites have always been salmon at night and hot turkey salad at lunch,” said Schuster.

“Hot turkey salad appealed to people,” added Richardson. “We have always roasted our own turkey breasts. People love the idea of having a fresh turkey sandwich.”

Hamburgers and hot dogs have always been on the menu. The restaurant also made its own chicken salad, ravioli and linguini with clam sauce.

The Courthouse Café’s signature dessert is Tanglewood Pie, which has sliced bananas, a cream cheese filling and blueberry topping. Pat Gish, late owner of The Mountain Eagle, gave the recipe to Schuster and Richardson.

Richardson is proud that some of the restaurant’s past employees were able to earn GEDs or take classes at the local community college while working for the restaurant.

“We have been able to juggle schedules for them to go to school,” she said.

Since its inception, the restaurant’s brick walls have been decorated with brightly colored quilts, paintings and other local artwork.

“It has been a fun place,” said Richardson. “ It has become somewhat of a tourist attraction.”

The Courthouse Café has been written about in travel magazines and featured in books such as “Restaurants in Historic Buildings” and “Southern Living Cookbook.”

Attorneys and their clients often headed to The Courthouse Café for lunch during trials and other court proceedings.

“It’s been kind of a community hub more so at some times than others,” said Richardson.

A few famous faces have dined at the restaurant. Actor Ned Beatty has eaten there. Actor Tommy Lee Jones and other cast members of “Coal Miner’s Daughter” shopped at The Cozy Corner while in Whitesburg when the movie was filming in Blackey in the late 1970’s. Jones bought a couple of paintings by Haymond artist David Lucas.

Schuster and Richardson are both looking forward to being able to spend more time with their families. Schuster has six sisters. Richardson has grandchildren in Canada, California and Lexington.

“ I think I will be blocking out time with them and I’ll be hanging out in the Corner,” said Richardson.

Schuster said she has made some friends through the restaurant whom she would have otherwise not met. She said she will miss “nights after the restaurant closed and there would still be friends here and we would sit, talk and laugh.”