Isaiah Briscoe knows exactly how he wants to be described on the basketball court.

“I would like to be known as a winner. I have always given 110 percent between those lines and tried to win each game I played,” said the Kentucky freshman point guard.

The 6-3 combination guard out of Newark, New Jersey has always been a winner. He won state championships at St. Benedict’s as a freshman and sophomore and added two more after he transferred to Roselle Catholic for the next two years. He helped Team USA win a gold medal in 2014 at the under 18 FIBA Championship. He also averaged 14 points, six assists and five rebounds per game last year in the McDonald’s All-American Game, Nike Hoop Summit and Jordan Brand Classic.

Briscoe never hesitated with his commitment to Kentucky even though the Cats’ point guard Tyler Ulis was returning. Nor was Briscoe bothered when Jamal Murray, another potential point guard, signed with UK during the summer. 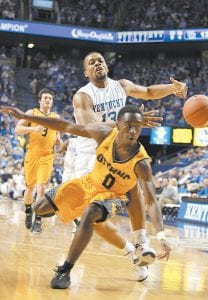 Kentucky coach John Calipari believes freshman Isaiah Briscoe can be a special defender. However, Briscoe prefers just to be known as a winner. (Photo by Vicky Graff )

“Like Coach Cal said, Kentucky is not for everybody. You are going to come here, compete and work hard. Whatever happens happens. He told me that. I never asked him who was there and who else he was recruiting. I just knew that I wanted to be coached by a Hall of Fame coach and I wanted to get better,” Briscoe said. “I want to be put on the biggest stage and that’s why I came to Kentucky. I love to compete. When you come to Kentucky you’re going to play with other McDonald’s All-Americans every day in practice. That’s what I want to do.”

He also likes that coach John Calipari believes in “positionless” basketball and feels he can play several positions as needed.

“That is another reason I came here. Don’t worry about what you are. If you are out there, give it 110 percent and things will happen,” Briscoe said. “I think coach Cal will put you in the position to look the best. He protects us and he cares about us and you can’t ask for more.”

Briscoe is a scorer when needed, but is also a dazzling passer.

“I like to see other people score. I am a lot more unselfish than some people think. I like to see my teammates happy. If my teammates are happy, I am happy,” Briscoe said. “I don’t have to be the guy to go out and average the most points and do things like that. My high school team, I shared the ball and shared the love. We were all friends on the court and off the court. I just like to see everybody happy.

Briscoe has always been a hard worker, often coming in to practice on his own before school started during his prep career. Calipari said that has carried over to UK with Briscoe often going in the gym, and taking others with him, for extra workouts.

“I want to get better as a player on the court and as a young man off the court. I think that they are giving me the tools to succeed at both here,” Briscoe said. “I came in before school all the time to shoot. I would wake up at 5:30, get in there by 6 and school started at 7:30. I would get a good hour or more in. I had some guys go with me sometimes, but for the most part I was by myself.

“I didn’t really want to just lie in bed. If you want to compete at a high level like Kentucky … and coming here you wake up at 6 o’clock, so I am kind of used to it now because I was doing it at such a young age. It’s not been that bad to keep doing that here.”

He got an earlier start on doing that at Kentucky than he originally planned when he suffered a head injury trying out for the USA Men’s U19 World Championship Team early in the summer and had to withdraw from the team.

“I think everything happens for a reason. Me not being able to attend USA Basketball, I came down here to Kentucky instead, lost 10 pounds and got a good feel for campus. I just think it was a blessing in disguise. I didn’t think that at the time, but now I am not complaining. I am happy I was here and I am getting a college education and I would not want to be anywhere else,” Briscoe said.

Not that playing with Team USA did not benefit him in a way that should help him at Kentucky.

Briscoe has been a big talker on the court, something that jumped out at UK teammates immediately.

“They are probably embellishing a little bit. I am just out there competing and trying to get the best out of Tyler and Jamal, two great players. I just like to compete. I think that if we push each other, we get each other better and that is why we are here,” Briscoe said. “For the most part since I came to college I have been working on letting my game do the talking. Just remain humble and let my game talk.”

Calipari says not to worry about any trash talking by Briscoe at Kentucky.

“He won’t play that way here so I am not worried about. He is going to be fine. Stuff we do here, you don’t have to add fuel to the fire. He has already started to change, but he has a ways to go,” Calipari said.

“There are a few flaws in his game that he’s going to have to tighten up a little bit, but he’s a basketball player who happens to be physically able to be a great defensive player,” Calipari said.

Calipari said Briscoe “messed with the ball” too much in high school and did more show than play.

“Talked too much. All that kind of stuff. He had to get the body right. All that stuff, but you could see that this kid can play basketball, and he’ll fight to win a game. I’ve had teams here that I’ve used the term: just a will to win, man. He has a will to win. That he does,” Calipari said. “And now we just have to help him with all the other stuff, but he’s been good. He’s been maybe even a pleasant surprise. I knew he would be good; I didn’t know he’d be this good.”

Fly with the eagles or walk with turkeys?

Isaac Humphries does not have a typical Kentucky basketball resume, and it’s not just because he is from Australia.

When he was young, he was more passionate about the performing arts than any sport.

His sister, Claudia, loved dancing when Humphries was young and that got him into playing music and singing. His mother even moved him to a different elementary school, one known for its performing arts.

He was in plays like “The King and I” as well as “Oliver.” However, he says he was far better at singing.

“Singing was just always more natural to me,” Humphries said. “I never really had a lesson, but I can sing a bit.”

He says teammate Tyler Ulis “can rap” so he won’t claim he’s the best singer on the team. However, he sees music in his future.

“I think down the road is when music will come back and start up and I will juggle that and whatever else I am doing,” Humphries said. “Right now I just want to focus on basketball.”

He went home for a few weeks during the summer, but knows his mother and grandparents likely will be at Kentucky often for games.

“My mom comes over a lot. I have a tight family, so my mom, my sister, grandparents come a lot just to hang out. Now they will come over and watch me in front of a lot of people,” Humphries said. “That is something we don’t really have in Australia and they have not really seen me play in front of that amount of people. It will be definitely be different. I think my friends that come over will be very surprised, too.

He says he doesn’t think his family has any idea about the popularity of UK basketball.

“My mom will see it when she comes to that first game and checks it all out. She will finally realize this is crazy. I don’t think I even know what I am getting myself into,” Humphries laughed and said. “She’s going to be surprised by the level of fans and excitement that surrounds UK basketball. She has seen this facility, but not seen it in action. I think all that sort of stuff will be the most surprising thing to her about Kentucky basketball.”

His mother helped influence his summer decision to join UK despite the Cats already having Skal Labissiere, Marcus Lee, Alex Poythress and Derek Willis on the roster.

“My mom told me, ‘You should fly with the eagles instead of walking with the turkeys,’” I didn’t want to go to a school where I would be a big fish in a little pond. It kind of scares me at times to just think how much I’ll learn here. But why not come to the best place?”

If you have not read the book “One and Fun” by Aaron Torres looking back at John Calipari’s first season at Kentucky, you should. It’s not only a fun read, but it has a lot of tidbits of information that even the most die-hard UK fan likely didn’t know because of the extensive interviews he did with players and coaches on that team.

I an extra copy of the book to give away. Just email me at larryvau@gmail.com and tell me why reading this book would be special to you. I’ll pick the one I like the best and send the book your way.