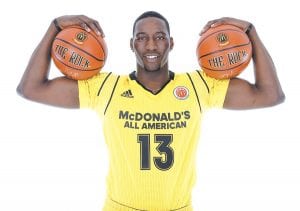 Bam Adebayo is a player University of Kentucky coach John Calipari says can be the “beast” that UK lacked last season to win the national basketball championship. (McDonald’s All-American Photo)

Whenever he can, Kentucky signee Bam Adebayo likes to be in the gym — and not just when he is working out or playing a game.

“I am in the gym every day. I just love being in the gym. Even if I am just sitting there, and sometimes I do that, I love it,” said Adebayo. “I’ve always been that way.”

Kentucky coach John Calipari has not tried to hide his feelings about Adebayo, who was a doubledouble machine in high school.

“We’ve missed a beast for a year. You know, when he gets it, he’s going to try to either dunk it or knock your arm. Bam is what he is and can dominate a game,” Calipari said.

Adebayo says he’s been working on all parts of his game the last month to get prepared for when he gets to Kentucky in early June for summer classes and workouts with his new teammates. He’s also looking forward to interacting with UK fans, many of who almost see him as the savior of UK basketball after the team’s lack of a consistent inside presence last season.

“I am just going to embrace it. It is fun. People saying you are the ticket to national championship, that’s fine,” he said. “It’s just another day for me. I am working on being the best I can be and I like to think of myself as the ticket to a national title, too.”

Adebayo transferred to High Point Christian Academy in North Carolina for his final season to play against better competition consistently. He averaged 18.9 points and 13 rebounds per game. His team reached the state title game and he was a finalist for the Morgan Wooten National Player of the Year Award. He followed that with a double/double (16 points, 12 rebounds) in the McDonald’s All-American Game, along with two steals and a block in just 22 minutes of play.

Not surprisingly, Adebayo is projected as a one-and-done player at UK.

“For me, it’s just another season of basketball that I get to enjoy. That’s all I think about right now,” he said. 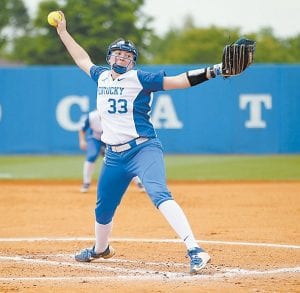 Pitcher Kelsey Nunley has a school-record 91 career wins going into NCAA Tournament play. She is an honor student with a double major in communications and community and leadership development. (UK Athletics)

He’s been to Kentucky twice and is looking forward to working with UK assistant coach Kenny Payne daily in practice.

“I know he is a good guy and does a lot for players. He will make me a better player,” Adebayo said.

Kentucky softball coach Rachel Lawson says there are many things that make senior Kelsey Nunley, the SEC Pitcher of the Year, special.

Going into NCAA Tournament play, Nunley is 20-5 this year with a 1.28 earned run average in 32 games. She has struck out 188 in 164 innings and opponents are hitting just .179 against her. She’s also walked just 47 and thrown only one wild pitch.

“There is not one thing you can pinpoint that makes her special,” Lawson, the SEC Coach of the Year, said. “She is a throwback. She is country strong and incredibly athletic. She was a three-sport star in high school as she played basketball and volleyball also. Her physical strength has really been helpful for her at Kentucky.

“She can command the ball and put it where she wants to. She is the ultimate teammate. She takes responsibility for keeping the team in the game for us to have time to win. She has done a great job again this year.”

Her senior class has been to three straight Super Regionals and hopes to go at least that far again.

“The all-around athleticism of the senior class told me it had a lot of potential,” Lawson said. “Over the last nine years, each class has offered something other classes have not and handed down something to younger players. But after they went to their first Super Regional, I knew this senior class was really special.”

Whatever it was, Lee was having a John Calipari-like moment at last week’s NBA Draft Combine in Chicago.

“I don’t think we’d lose at all next season if I come back,” Lee told media members at the draft combine.

Say what? Have I missed something here?

Lee has been a good player at UK at times. He was part of two Final Four teams, but certainly has never been a dominant player. Maybe he just meant with the other players UK will have, his return would provide depth for an unbeaten team.

ESPN analyst Fran Fraschilla calls Lee an “energy guy” that might get drafted in the second round at best.

“I know he’s a high-character guy. If he runs hard, plays hard, plays within his ability to defend and rebound and dunk, offensive rebound put-backs, run to the rim on pick-and-rolls, you know, he’s got a chance, he really does,” Fraschilla said. “I saw him in practice in October, and to me, he’s a big man project who somebody is going to likely draft in the second round, and if he’s not drafted, you’ll see him in Las Vegas running up-and-down the court in the NBA Summer League where he can prove himself.”

Fraschilla emphasized that he likes Lee as a project.

“If a team drafts him in the second round or they sign him (as a free agent), I could see him being part of an NBA veteran camp, being signed to play in the D-League and just starting his career there, if he doesn’t want to go to Europe. But he’s a big man who runs the floor, plays with a good motor. He’s got a chance,” Fraschilla said. “He’s not skilled but he’s active and he’s got a good motor. It’s a 50/50 proposition that he’ll be on an NBA roster.”

And 50-50 is lot better than what I see UK’s chances of going unbeaten next season — with or without Lee.

It was a joke when John Calipari said he might coach until he was 75 years old, he was not being serious. Or at least that is what he said when questioned about that statement.

“It’s the Carnegie Hall of basketball. And what I mean by that is if you put players on this stage, they make it. This is that stage. And I get an opportunity to go beyond basketball. I want to win a championship every year I coach and if you know me you know that’s true.

“But I get as much out of seeing a family breathe for the first time. Like, the mother was working two jobs. And I hear, ‘Oh, no, all my kids—‘ Well let me tell you: Eighty, 90 percent of the kids I coached have come from tough backgrounds, so maybe I wasn’t fortunate enough that the lawyers and doctors send me their kids. I don’t know. But I’m telling you, they get to breathe for the first time and they get to—you look at that mother, she’s crying. They’re tears of great joy and it’s not because, ‘My son’s now a millionaire. We’re going to go crazy and I’m going to lose my mind.’ No. It’s, ‘I can breathe.’”

Calipari said its rewarding to be in the business of helping families as he has been doing. He says as long as he can do, he’ll keep coaching.

However, it can’t hurt UK’s chances of keeping him that the Wildcats offered a scholarship to his teammate, three-star safety Ahman Ross, last week. He got the offer two days after backing off a commitment to Miami he made in September before then head coach Al Golden was fired midway through the season.

The 5-11 Ross is rated as the No. 26 safety in the 2017 recruiting class by ESPN. He has also had scholarship offers from schools such as Louisville, Florida State and Indiana.

And one other note — he is also best friends with Jones who has already noted that he can “close the deal” with Ross.