Cal still not happy after win over Samford 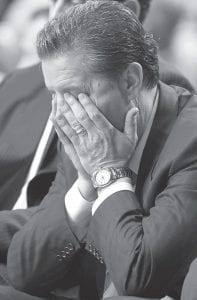 Kentucky coach John Calipari reacted to his team’s play during the second half against Samford at Rupp Arena in Lexington on December 4. Kentucky won 88-56. (AP Photo)

Kentucky’s 88-56 rout of Samford Tuesday night should have provided a bright spot for the Wildcats considering it ended a twogame losing streak.

How the Wildcats finished it bothered coach John Calipari, who plans to reward his team with three weeks at Camp Cal. And it’s not the kind of Christmas vacation they might envision.

“We’re going to condition in the morning for the next three weeks and then practice in the afternoon,” Calipari said, “because I can’t think of any other reason why you wouldn’t come out in the second half and play. Especially with what we’ve been going through.

“You need to learn how to play a full game. They had that opportunity today. So we have to chalk it up to they’re not in shape. They will be.” 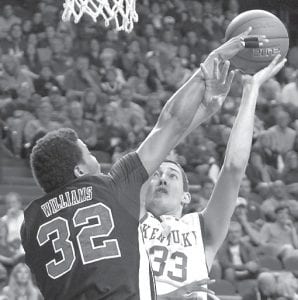 Kentucky’s Kyle Wiltjer (33) shot under pressure from Samford’s Tim Williams during the first half at Rupp Arena in Lexington. (AP Photo/ James Crisp)

Nerlens Noel added 13 points while Julius Mays and Kyle Wiltjer each had 10 for the Wildcats (5-3), who shot 34 of 61 from the field (56 percent) against the Bulldogs after hitting just 40 of 118 in back-to-back losses against Notre Dame and Baylor.

But after rolling to a 45- 14 halftime lead, Kentucky outscored Samford by just a point in the second half and Calipari believes that suggests a lack of fitness or commitment. Either way, he plans to address it by the time the Wildcats begin their Southeastern Conference schedule in January.

“Some of it may be mentally, you’re not strong enough, you’re soft,” he said. “So conditioning is good. It makes you stronger mentally.”

Willie Cauley-Stein added 12 points and a gamehigh 12 rebounds for Kentucky, coming off a rough week that left the Wildcats outside the Top 25 for the first time under Calipari.

Overall, the statistics were pretty good for the Wildcats, who bounced back from those two losses by outrebounding the Bulldogs 41-25 and holding them to 40 percent shooting.

At the very least Calipari wanted more aggression from his players after they struggled to challenge Baylor on shots or for rebounds in Saturday’s 64-55 loss. The coach even called out his squad about their commitment on Monday, suggesting that his team could benefit from some extra time in the gym.

For one half, the Wildcats gave their coach what they wanted.

Defensively, they dove for loose balls and challenged the Bulldogs on almost every shot and pass. The first-half result was 4-of-20 shooting (20 percent), a 23-13 rebounding advantage and 14 turnovers leading to 24 points.

Kentucky was just as impressive with the ball, shooting 17 of 32 from the field in the first half while committing just seven turnovers. The Wildcats’ control of the boards included a 6-1 edge in offensive rebounds that seemed to please their coach the most.

Kentucky’s play also contradicted the comments of Samford coach Bennie Seltzer, who told his team that this Kentucky squad wasn’t talented as past Wildcat teams. And he didn’t back away from his remarks.

“I said a lot about this team, but it was all for motivation,” Seltzer said. “I said they are human just like you. There is no need to go out there and be afraid. There are 24,000 people in the stands and not one of them can play defense, so relax. They’re still not as good as some of their teams.”

“I think we got a little complacent,” Cauley-Stein said. “We have to keep pushing when we have a big lead.”

Tuesday’s close earned the Wildcats more of what they got on Sunday, when Calipari ran them hard in the morning before practicing in the afternoon. Though players aren’t looking forward to 7 a.m. workouts and practices during the semester break, they seemed resigned to them and conceded that’s what needed to get them to meet expectations of their coach and Big Blue Nation.

“We’re ready to get in better shape,” Wiltjer said. “We just want to do what Coach Cal wants us to do.”