Cal: We will be better 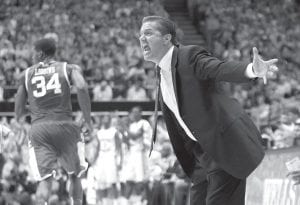 John Calipari predicted Kentucky’s early season struggles months ago, saying there was no chance his freshmen-laden Wildcats would be able to win their first 19 games the way the team did a year ago.

The schedule was too tough. The roster too young. The obstacles too big.

Calipari turned out more right than he wanted to be.

The 17th-ranked Wildcats (5-2) have lost two of three heading into Wednesday night’s game with No. 23 Notre Dame (8-0) in the SEC/ Big East Invitational. Kentucky has been plagued by the kind of mistakes Calipari saw coming over the summer, namely a lack of trust.

He pointed to several instances during a 75-73 loss at North Carolina on Saturday when the Wildcats were selfish instead of selfless.

“We were passive (in the loss to) North Carolina,” Calipari said. “They were the aggressor, we were passive. Why? Because we had a couple of guys on the floor you could not trust. Then everybody pulls back, no one helps, no one makes a rotation, no one wants to leave their own man because they don’t have any trust.”

Calipari isn’t panicking, he knows these growing pains are part of the process. It’s a process the Wildcats were able to mask a year ago thanks to the precocious talents of stars John Wall and De- Marcus Cousins.

This year’s group isn’t as tal- ented or as deep. Yet Calipari remains confident there’s plenty of time to fix the problems, but allows it won’t be easy against the Fighting Irish.

The game will be played on a “neutral court” at Freedom Hall in Louisville, though the sidelines and baseline will be Kentucky blue. The teams last met at the arena in 1988, though the highly partisan crowd Wednesday will hardly be an issue for the veteran Irish.

Notre Dame starts five seniors, all of whom played the last time the two teams met in the 2009 NIT quarterfinals. The Irish won 77-67 in the final game of the Billy Gillispie-era at Kentucky. A week later Calipari was at the helm promising an instant makeover.

He’s done just that even while cautioning things would be bumpier this season. He anticipated issues early, though the sleeping habits of freshman forward Terrence Jones wasn’t among them.

Jones sneaked in a short nap between the pregame meal and the trip to the Dean Dome to face the Tar Heels. Calipari blamed the snooze for a lifeless, foul-troubled 3 for 17 performance.

“He was never emotionally connected to the game, there was no sense of urgency the entire game,” Calipari said.

It’s a loss Jones took personally, though he jokingly blamed his nap on teammate Doron Lamb, who turned off the TV in their hotel room on Saturday morning, giving Jones the quiet he needed to drift off to sleep.

Don’t expect him to sleep on the Irish. Notre Dame is off to its best start since 1973 behind a stingy defense that is holding opponents to 38 percent shooting.

The Irish don’t have trust issues, they worked that out a long time ago. Calipari knows the odds of him one day having a starting lineup littered with seniors are slim. His teams have to grow up much more quickly. He believes this one can.

“We’re a young team but we’ve got the pieces we need to do well,” Calipari said.

Those pieces do not include freshman center Enes Kanter. The school is petitioning the NCAA to take another look at Kanter’s eligibility. The NCAA ruled Kanter permanently ineligible last month for accepting improper benefits while playing for a Turkish Club team.

If Kanter remains ineligible, it means the Wildcats will have to go forward with a thin frontcourt comprised of Jones, Eloy Vargas and Josh Harrellson.

It’s not exactly Cousins, Patrick Patterson and Daniel Orton — the group that provided the backbone of last year’s team — but the Wildcats believe it’s enough, provided they do a better job of helping each other out.

“We have to stay humble and keep fighting and do what the coaches say,” said guard DeAndre Liggins.

Calipari’s message to his players has been blunt: Get over yourselves. He pointed to several instances in the game against North Carolina where the Wildcats built a small cushion then threw it away because players figured “it was time to get mine.”

For Kentucky to have the kind of success Calipari wants to have, that can’t happen anymore.

“Doron Lamb should have got the ball more,” Calipari said. “But guys were like ‘he shot the last two.’ No, he made his last two, you missed the last four. He shoots this one. That’s what they don’t understand. But that’s OK. Here we are, a brand new team. I like my team. I’d just like to win every game.”