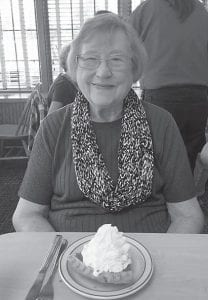 Hello everyone! I hope everyone is doing alright during this long stretch of hot weather we are having.

Yes, I am loving it as I’ve made no secret I don’t like cold weather. If I could get by without it, I wouldn’t have air conditioning. I have window air and it is set on 74, plus I keep an electric blanket on my recliner so I can pull it over me.

As I think back to the hot summers of childhood at Roxana, there was nothing called air conditioning. Mom opened the widows and the doors and we just dealt with it as we had no electric fans either.

Sometimes I see posts on this contraption that is called Facebook of other peoples lives, oh how I wish that had been mine. I can just see Mom carrying buckets of water from the well when we lived on the hill above George and Minnie Whitaker’s. Mom would have to set the buckets down as she would try to carry two buckets at a time up the hill, spilling a little as it would bounce her against her legs.

I would try to help her, but of course she was afraid I would spill the water. Mom carried the coal up that same hill in summer and winter as she cooked on a wood and coal stove.

Dad worked in the coal mines with hardly not enough pay to make ends meet, somehow managing to keep food on the table and pay the rent.

Mom was the backbone of our family, making do with what she had. Dad always stopped at the local store, J.C. Burke’s or Amburgey’s, which was owned at the time by Junior and Bernice Adams, to bring whatever meat that Mom was to prepare for supper.

When I started in school Mom made my clothes out of feed sacks. I did get a new pair of shoes when school started. My brother Wallace Lee started school the following year. Wallace did get a couple of pairs of bib overalls to wear to school, and of course new shoes also.

While other children had sandwiches, I carried milk and bread in a four-pound lard bucket until the inside of the bucket would peel off, then you just spit it out and finished eating. I have to laugh when I read of children having certain things to carry for lunch.

The only thing I will say about my mother is she was so timid that she wouldn’t stand up to anyone no matter what. Yet she was such a strong person to have let my dad live until he died of cancer.

A few years before Mom died she moved to Jenkins, where she lived in a half decent house with a bathroom. That much I am thankful for.

I finally got in touch with Les and Pat Wagner. They both are recovering but still have a lot of health issues. It has been a rough year for both Les and Pat.

I paid a visit to Hayward Day. God has been so merciful to work a miracle to bring Hayward as far as he has come. It was great to spend a little time with him.

Hayward showed me a picture of his grandparents. His grandmother was the one who drowned in the 1927 flood, along with two of her children, a little boy and girl as I wrote in my previous column.

Now what I am about to write, please forgive me if there are mistakes in the rest of my column, as my heart is so heavy I can’t concentrate to write.

My heartfelt sympathy goes to the family of Johnny and Ann Calihan, as their oldest son Gary Calihan took his final voyage Thursday, Oct. 3. This was an unexpected earth-shattering thing for the Calihan family.

There’s not a thing I can say or do to ease the pain of their loss. I feel so helpless. Johnny and Ann feel like family to me.

Johnny and Ann’s family goes back in time with my family long before I was born, as my dad knew Ann’s brother Bill Ison when they were young. Johnny remembers my great-grandmother Nance Coots.

Mother would, with her sister Nora Adams Gulley along with a few others, walk across Big Branch Mountain and down Paices Branch to Johnny’s parents, Lloyd and Nora Calihan’s, to square dance when she was young.

I grew up knowing the names of all the Calihan family and of course Ann’s too. Her grandmother Aunt Mary Caudill lived in Tolson Creek just a little ways from Big Branch and Roxana.

Ann held me when she was 15 years old and I was about 8 months old, as she blew in my mouth to cure the thrash. Yes it was an old wives’ tale. If someone hadn’t ever seen their dad, they could cure this fungus that got in a child’s mouth.

Ann’s dad passed away before she was born. Yes, it cured me. Now I’ve always teased Ann saying she blew the breath of meanness in me.

I also tease her children and tell them she held me before she held them. So you see why my heart is breaking for this family.

Clay and Green Calihan went to see Johnny and Ann, then stopped by to see me. Now Clay and Green may never come back. I had been so sick at my stomach and my ankle hurting me, I finally had to lie down in my recliner.

I heard a soft knock on my door and I thought it was Michelle, the woman back the lane, as she stops to use my phone sometimes. I had been so sick that I had taken my dentures out, well there stood Clay and Green. I finally excused myself and got myself decent. I am sure glad they didn’t have a cell phone out.

They know how much the family means to me.

My son Keith Ballard has to have surgery Friday morning to remove a spot of cancer. It will take a couple of hours with surgery and recovery, so of course I can’t attend Gary’s funeral. Johnny and Ann won’t even know who is there.

Blackey Days is Oct. 11 and 12. Carcassonne Community Square Dance is cancelled until Oct. 19. due to Blackey Days, and Campbell’s Branch Community Center will have Sunrise Ridge.