Calipari, “Chin” Coleman have known each other for some time

John Calipari was not a stranger to Ronald “Chin” Coleman before Coleman left Illinois to join the Kentucky coaching staff recently. Or at least Coleman knew about Calipari even if Calipari might not have remembered their first meeting when Coleman was head coach at Whitney Young High School in Chicago.

“We were a top-10 program in the country. I’m sure you have heard of Whitney Young and all the great players that have played there, and I coached there. When I was a high school coach, Coach Cal was at Memphis,” Coleman said.

“He may not even remember this, but I came up to Memphis and I studied Coach Cal for a week. Coach (Orlando) Antigua remembered that. I was there for a week just studying the dribbledrive offense at the time. That’s what I do: I’m a forever student of the game. I study like crazy.”

Coleman said he visited every coach/college he could trying to learn something from everyone.

“If I can take a page out of this book, his book, that book, put it with my pages, now I’ve got a really, really, really good read. I’ve got a great book. I did that as a high school coach, and that was kind of like my first introduction to Coach Cal and it was from an admiration standpoint in what he was doing in the offense and obviously the success,” Coleman said. 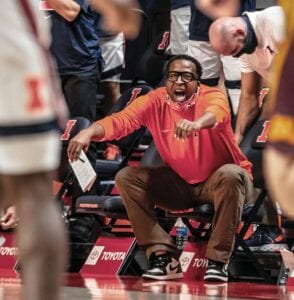 Coleman obviously followed Calipari’s career success and when Coleman started his college coaching career he sometimes would find himself in the same gyms in Chicago and other places as Calipari.

“We’ve known of each other for a while, but I never, ever, ever dreamt or thought that I would have the opportunity to work for him, and that’s why when that opportunity came, it was like a sweet deal, man,” Coleman said.

“It was just so sweet to say that I was coming to coach at Kentucky.” s

TyTy Washington is a natural scorer but the 6-4 point guard who signed with Kentucky last week can do a little bit of everything. 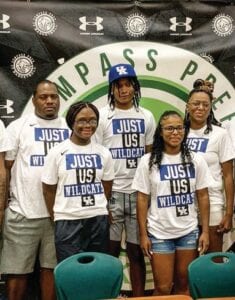 TyTy Washington (center) could be Kentucky’s point guard next season but he is versatile enough to play either guard spot according to recruiting analysts. (Arizona Compass Photo)

“He can truly play both guard spots. His DNA is to score the ball and he does that in a variety of ways. Behind the arc, he is confident and balances that with a pull up game and floaters and lay-up at the rim. He navigates well in ball screens because he can read his man, the coverage and the helpside and make the right play,” ESPN national scouting director Paul Biancardi said.

“His decision making is strong as is his leadership ability. He is not afraid to hold others accountable nor does he mind being held accountable by others.”

That’s the kind of point guard presence UK lacked last season when it went 9- 16 and now hopefully has for next season with Washington, a player who made a dramatic rise in the recruiting rankings his senior season at Arizona Compass Prep.

“I like that he can do a number of things. In the GEICO Nationals he had the ball in his hands a lot because he had to carry the team offensively. At the Iverson Classic he got the ball out of his hands quickly and threw ahead. The ball didn’t stick in his hands,” Rivals.com recruiting writer David Sisk said.

“He is a prolific outside shooter with a beautiful and natural stroke. He also sees the floor well and appears to be an excellent passer. In a nutshell it looks like he does a lot of things well.”

Washington can run the point and/or score.

Sisk said in the GEICO national championship he had assists off the dribble. At the Iverson Classic, he had several assists off quick passes in the open court.

“He looks to me like a smooth point guard who is an excellent outside shooter as well as a good passer,” Sisk said. “I think he would be fine in (John) Calipari’s system because he is an obvious upgrade over what they had at the point last year. I definitely think he is one of the top three guards in 2021, which means he’s talented.

“It still remains to be seen how effective he would be a late shot clock situation with the pending high ball screen. But if he were to be on the floor with CJ Fredrick, Dontaie Allen, Kellan Grady, and even perhaps Davion Mintz, then you all of a sudden have a cast of very good shooters on the floor.” s

Two freshmen receivers who might find a way to help UK’s offense next season are Christian Lewis of Alabama and Chauncey Magwood of Georgia, who were both recruited by assistant coach Jon Sumrall. Magwood enrolled early and went through spring practice while Lewis will be on campus in June.

“ They are both different. Christian is about 6 -3 1/2 and longer. He is a play the ball in the air guy,” Sumrall said. “He will get better as he develops more strength.

“He was a really good high school basketball player. When he was a sophomore coming off an injury, we were his first SEC offer. We were fortunate to get him on board and hold on when the big boys of the SEC tried to flip him. He’s also a great student.”

Lewis had 70 catches for 1,235 yards and 18 touchdowns his senior season and helped Pleasant Grove win back-to-back Class 5A state titles. He has six catches for 111 yards and two scores in the 2020 title game. Lewis, a four-star recruit, also had 75 catches for 1,398 yards and 20 touchdowns as a junior. He picked UK over Texas A&M, Mississippi and Notre Dame.

He caught 53 passes for 700 yards and 10 scores as a junior after making 68 catches for 958 yards and seven touchdowns his sophomore season. He picked UK over Arkansas, Florida State, Louisville, Nebraska and South Carolina.

“At some programs it might not be a big deal to start every game in high school but it is really a big deal at that school,” Sumrall said. “His team won a state championship when he was a freshman. He played in three state title games.

“ He has great short area quickness. He knows how to get a defensive back off balance and is a great route runner. He just has an edge about him, a kid of football moxie that you just can’t make up.” s

Quote of the Week 2: “We came here to change a program. We wanted to make an impact and leave a legacy for guys after us and I think we did,” Landon Young on the Kentucky football program.

Quote of the Week 3: “I love playing in New York. I want to retire as a New York Knick,” Julius Randle on The Victory podcast after a New York win last week.