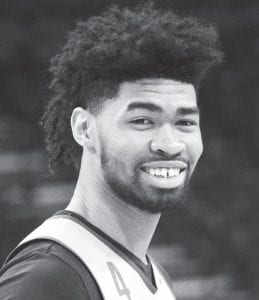 Nick Richards says no to the NBA for now. (Photo by Keith Taylor)

Nick Richards tested the waters and swam back to the shore.

The University of Kentucky junior forward announced he would return for a third season with the Wildcats on Tuesday. Richards declared for the NBA Draft, but the 6-foot-11 forward decided coming back would increase of chances of a career at the next level.

During his first two seasons, Richards played in 74 games and started in 40 of those contests. Richards joins Ashton Hagans, Immanuel Quickley, Brad Calipari and Zan Payne among the returnees from last year’s squad.

“These past two years have been the best of my life,” Richards said. “It’s been an incredible experience. I’ve learned a lot, but the job’s not done yet. BBN, are you ready for year three?”

In his first two seasons with the Wildcats, Richards has averaged 4.5 points, 3.9 rebounds and 1.1 blocks per game. He led the team with 47 blocks a year ago and snagged 19 rebounds in a win over Southern Illinois.

Kentucky coach John Calipari was supportive of Richards and welcomes his return next season.

“I was fully supportive of Nick going through the NBA Draft process for the first time in his career to see where he stood,” Caliapri said. “I’m happy with where Nick and his family ended up and I’m excited to continue to coach Nick because I know how special he can be.”

The Kentucky coach expects Richards to be “one of the best big men in the country.”

“There is no reason he can’t be,” the Kentucky coach said. “There is nothing that Nick hasn’t seen at this point, and he knows what my expectations are for him in his junior season. I want him to dominate the game and affect it on every single possession.”

Freshman EJ Montgomery had until 11:59 p.m. tonight (Wednesday) to make a decision on his future plans. Like Richards, Montgomery declared for the draft with an option to return next season.

PJ Washington, Tyler Herro and Keldon Johnson have declared for the draft, while Jemarl Baker transferred to the University of Arizona.