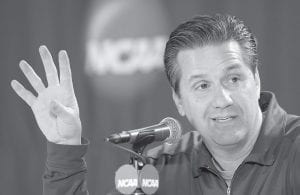 John Calipari agreed Tuesday to leave Memphis and the dominant program he built and take on the challenge — and riches — of returning Kentucky to college basketball glory.

Calipari will receive an eightyear, $31.65 million deal plus incentives, according to the university, making him the highest-paid coach in college basketball. The school also will pay Memphis a $200,000 buyout.

The 50-year-old Calipari has a career record of 445-140 in 17 seasons. He chose to leave Memphis after nine seasons of success, including a record of 137-14 over the past four years.

He spent the day considering the Wildcats’ lucrative offer and calling former Kentucky coaches, including Joe B. Hall.

Hall said the informal chat centered on what it takes to survive one of college basketball’s most prestigious and most scrutinized jobs. Kentucky fired Billy Gillispie last Friday after two disappointing seasons. 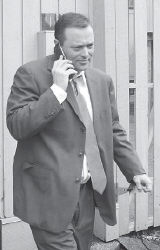 BILLY GONE — Kentucky coach Billy Gillispie talked on his cellular phone as he left the Wildcat Lodge after meeting with his team shortly after he was fired on March 27. (AP Photo)

The Commercial Appeal of Memphis, Tenn., first reported the hiring.

Tigers walk-on Preston Laird said Calipari met with the team Tuesday afternoon, first as a group and then with individual players. The freshman guard described the meeting as very quiet, “Nobody really said anything.”

“He started off by telling us it was the hardest day of his life,” Laird said.

Memphis has scheduled a news conference for noon to discuss the future of its basketball program.

The news of Calipari’s hire spread quickly across Lexington. More than 100 fans stood out in the rain at Blue Grass Airport hoping to catch a glimpse of Calipari’s arrival on a plane from Memphis. No such luck, not that it mattered to a fan base eager for a winner.

Hoping to make a big splash after Gillispie’s tenure, Kentucky went deep into its pockets to land one of the nation’s most high-profile coaches.

Pitino, now the coach at rival Louisville, never made more than $2 million a season during his remarkably successful eight-year run at Kentucky. Smith’s compensation neared $2.1 million at the end of his decade with the program and Gillispie received a base salary of $2.3 million with another $750,000 available in incentives.

The salary nearly triples the $1.6 million salary of Kentucky football coach Rich Brooks, a rarity in a conference where football reigns.

Calipari already was one of the highest-paid coaches in the country, signing an extension with Memphis last year that paid him $2.35 million annually.

Memphis had promised to match whatever Kentucky offers, but the Wildcats have one thing Memphis doesn’t: the opportunity to coach in a top-flight conference at the home of college basketball’s winningest program.

It’ll be seen as money well spent if Calipari can duplicate the success that’s followed him throughout his collegiate coaching career.

He put together turnarounds at Massachusetts and Memphis, winning over 440 games in 17 seasons and leading both schools to a Final Four.

Putting the pieces together at Kentucky might not take long, though the program has plenty of question marks.

The Wildcats went 22-14 this year, missing the NCAA tournament for the first time since 1991 despite having two of the SEC’s best players in guard Jodie Meeks and forward Patrick Patterson.

Patterson said after the season he’d likely return for his junior year, while Meeks — a secondteam All-American — was going to take his time on a decision.

Hiring Calipari might be all the incentive they need to return. He won over fans and made over the program at Memphis behind an electrifying style of play that has churned out a handful of NBA players, including Derrick Rose, Shawnae Williams, Dajuan Wagner and Joey Dorsey.

Calipari’s ability to lure some of the nation’s best high school players — regardless of how long they plan on sticking around — has made him an attractive candidate for years.

He’s been able to fight off temptation for nearly a decade, but the chance to makeover one of college basketball’s elite programs proved to be too much.

Athletic director Mitch Barnhart stressed the need to find a coach who can handle all that comes with coaching the Wildcats. Calipari has never met a camera he didn’t like and certainly doesn’t lack confidence — two things Gillispie struggled with during his tenure.

Kentucky received permission to speak to Calipari on Monday, less than 72 hours after Gillispie was fired. Sensing the need to make a home-run hire after the Gillispie debacle, Calipari certainly has the resume and the charm to sate a rabid fan base.

But he also has some baggage. He led Massachusetts to the Final Four in 1996 only to have the school vacate the honor when star Marcus Camby admitted to receiving gifts from a sports agent.

Though Calipari has never been sanctioned by the NCAA, he’s been unable to shed the Camby mess. His hiring could raise some eyebrows from fans still smarting from the recruiting violations during the Eddie Sutton era 20 years ago that nearly wrecked the program.

Pitino swooped in to save Kentucky after Sutton left, taking the Wildcats to three Final Fours and a national title in eight years.

Neither Gillispie nor Smith duplicated that success, but neither had the charisma nor swagger of Calipari, who now finds himself working an hour east of Pitino.

The two have a long history dating back to when Pitino recommended Calipari for the head coaching job at UMass in 1988. Pitino’s Kentucky team beat Calipari’s UMass squad in the ’96 Final Four and the two have had a testy — at least on the floor — relationship ever since.

The rivalry really began when Pitino took over at Louisville in 2001 as the Cardinals and the Tigers fought with Cincinnati and Marquette for C-USA supremacy. Those three programs left for the Big East in 2005, and Memphis has since dominated the conference.

Memphis hasn’t lost a C-USA game since 2006, and the Tigers are the only program in the country to receive either a No. 1 or No. 2 seed in the NCAA tournament in each of the last four years.