Calipari is pleased with Humphries

When John Calipari flew to Indiana to watch Isaac Humphries play last season, he said it was during the “worst snowstorm” he encountered last year.

Once he landed, he called former Notre Dame coach Digger Phelps and current Irish coach Mike Brey who told him it never snowed like that.

“That’s when I was fighting to get to the gym,” Calipari said. “But I watched him play and said that is a 7-footer who has skills and is bigger than (former Cat) Josh Harrellson. I knew he was a young kid. I just wanted to take a glance at him. Then when he said he was reclassifying (to the 2015 recruiting class), I said he would be good for us.”

The Australian center helped his country win a silver medal at the 2014 FIBA Under 17 World Championship. He averaged 18.9 points, 11.6 rebounds and 3.3 blocks per game in seven games. Humphries scored 41 points and grabbed 19 rebounds against Canada and Jamal Murray, another summer UK addition. 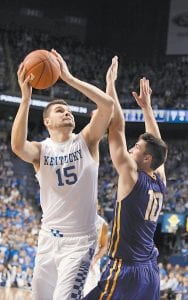 Isaac Humphries, left, has accepted his role in playing behind talented teammates at Kentucky but also knows that will only make him better. (Photo by Vicky Graff )

Humphries let few know that he was interested in coming to Kentucky before he made a summer decision to sign with the Wildcats and it became official on August 20.

“My circle is very, very close. We are not the type that tells everyone everything. I wanted to keep it quiet until everything was final. Having such a small circle did help and everyone understood what I wanted,” Humphries said. “I planned to reclassify in March. It had been in the works but I had just been trying to get good grades and figure out all that stuff.

“It wasn’t always going to be Kentucky. There were other schools. I don’t think any player that is recruited says this is it months in advance. It was just a process of getting to know every school and getting to know the coach and just deciding like any normal player would. Then it was obvious it was Kentucky.”

He gave Kentucky needed depth on the inside to go with Skal Labissiere, Marcus Lee and Alex Poythress.

“I work a lot around the basket. I like to bang inside, go really hard with post moves,” Humphries said. “Now I am starting to shoot outside and put the ball on the floor a lot. I think that an allaround 7-footer is an asset to everyone and that is my mentality.

“My 3-point range is getting there I think. My midrange is a lot better. To me, it is very reliable. I feel like if I shoot it is going in unless it is an off night. The 3-point range has not come yet. I am slowly developing that one step at a time.”

“ He is really fundamentally sound. He is very strong. People are saying he is just like Josh Harrellson and I can agree with that. His corner and midrange shots go in all the time,” Hawkins said.

Jamal Murray, another summer signee, has played with Humphries and told Calipari how good he was.

“The kid is really skilled. He makes 15-footers, makes free throws. Anything around the goal he makes,” the UK coach said. “When he shoots it, you just think it is going in.”

Humphries says going against Labissiere and Lee daily have made him quickly improve.

“They are both different players and both such good players. It’s very good for me to go against them and learn how to play against that style of play,” he said. “I think I will have to adjust a little bit to the speed but one of my reasons for coming to high school (at La Lumiere School in Indiana) was to somewhat get adjusted to that American style of play. Now that I have done that, I think I will be one step closer to adjusting to the college level.”

He likes the talent on the team and the friendship off the court.

“I think they are all really great people off the court and on the court they are obviously really good players. They are just great guys and I am looking forward to becoming brothers with them,” Humphries said.

Tai Wynyard of New Zealand plans to join the team in December. Will that give Humphries a mate he can relate with?

“We have conversed a few times at tournaments and games. I know him well enough if I saw him I would say hi,” Humphries said. “But I don’t really know many New Zealanders, so I imagine they are probably really different. The culture there is different. To us, it is very different.”

He said teammates ask him few questions about Australia, but fans and other students do often.

“ I have never been around an Australian,” Hawkins said. “This is my first one. He is a really nice guy. Has a great personality but is very shy. I remember when I was a freshman I was shy. Hopefully we can get him out of that.”

Humphries is used to being on his own. He left home at age 15 to move to another state to attend the Australian Institute of Sport where he trained and lived for a year.

“ Then after that year I moved to America for a year and now I am here. I have been away for a while and I am used to it,” the Kentucky freshman said. “I was only 16 when I got to Indiana, but it honestly wasn’t that hard. I was accustomed to not seeing family all the time. There was a level of getting used to it, but I had great people around me. It was not that bad and it is nothing but great here.”

Calipari loves that attitude and the way Humphries has accepted his role on the team.

“Isaac knows he’s a good player, but I’m not as good as those three (Lee, Labissiere and Derek Willis ahead of him). It’s a hard position to be in. He’s just … you’re really good, too, but you’re not as good as those guys, so you’re going to have to wait your turn. He was fine,” Calipari said.

ESPN basketball analyst Seth Greenberg says that the Southeastern Conference will be better this year and should have more teams in the NCAA Tournament.

“They went from having basketball teams to basketball programs.There has been a commitment to basketball with facilities and coaching hires,” said Greenberg. “You are making real investments in a program and that will speak volumes for the league. The league is good and will continue to get good. I think the league will be really good and fun to watch.”

He says Florida will “be better than people think” and that South Carolina has a veteran team that will defend and share the basketball. “The only concern is can they shoot the basketball, but they are going to get easy baskets this year,” Greenberg said.

Former Kentucky All- American Mike Pratt is not yet convinced that everyone understands “how signifi- cant” it was when the Wildcats started last year 38-0 before losing to Wisconsin in the Final Four.

“With the one-and-done mentality and so many players leaving (school) early, going 38-0 is pretty significant,” said Pratt. “That is hard even with the softening of the depth in college basketball. To organize your team and get them to understand focus like Cal (John Calipari) did is pretty impressive.”

While players and coaches insisted the pressure of an unbeaten season did not create pressure on the team, Pratt has a slightly different view.

“Last year I saw that tent UK basketball is under grow. It was a huge tent. At the end of the year, everybody was in that tent. Anybody who wrote about college basketball, or wrote period, was trying to get something from this team or staff. There were a lot of people hoping they would lose,” Pratt said.

“I watched this team keep its composure. They did not get rattled. They had TV people go to class with them. They hounded these young guys. But until the NCAA Tournament, I never saw it bother them. They walked right through it.

“Starting with the NCAA, I just saw a change in their body language. They were a little more frustrated with the same questions from the media. It took a lot out of them being unbeaten. They just got worn out under that big tent. It’s so hard to go 38-0. We may never see that again. Last year just wore those guys out. It made them better men and I give them a lot of credit for handling everything they did as well as they did.”

Coaching Mistakes Are Troubling at Kentucky

Finally, let’s look at Kentucky football as it gets set to host Charlotte Saturday in hopes of ending a five-game losing streak. If the Cats don’t win this game, maybe coach Mark Stoops should just call it quits and leave. But with the way this season has gone, who knows.

Even though UK is 4-6 and can still get bowl eligible by beating Charlotte and Louisville, the buzz is that there might not be enough fans at Commonwealth Stadium Saturday to fill Rupp Arena. I doubt UK fans will bail that much — after all, they have endured years of misery. But the loss at Vanderbilt last week certainly soured the fan base and should have.

What would quarterback Patrick Towles say to fans?

“We got two chances to go to make the postseason. Charlotte next week and then Louisville comes to town. I can tell you this: every person in that locker room is going to give everything they possibly have these last two games,” Towles said after the 21-17 loss at Vanderbilt. “If we come up short we come up short, but like I said I can never fault our effort. We gave it everything we had, and we were fighting to the last minute and I totally expect that from my guys every Saturday.”

Towles was benched for part of the game in favor of Drew Barker, who followed his first scoring pass with an interception that was returned for a score. Towles has since been demoted to second string.

“We still need two more wins to get to a bowl game and we got two more games left, so if you can’t get fired up for two games and we have to win both, then I don’t know if you should really be on this team. It was a tough loss, we are mad about it, but we just got to keep moving forward and go and get these next two wins.”

Sounds good, but count me as one not convinced that UK can overcome not only player mistakes on the field, but also continuing miscues by a coaching staff that is being paid way too much to make the decisions it has during games.

If you have a comment, suggestion or criticism, let me know at larryvau@gmail.com or on Twitter at @vaughtsviews. I’ve enjoyed hearing from a lot of you the last few weeks.