Calipari is trying to stay positive

John Calipari spoiled Kentucky fans with his phenomenal success as soon as he got to Kentucky. Even the NIT season was somewhat easy to explain because of the injury to Nerlens Noel and unexpected departure of point guard Marquis Teague to the NBA.

But this season has been perplexing to Calipari and downright frustrating to UK fans. A team picked in the preseason top five nationally and expected to win the Southeastern Conference again has been inconsistent at best. Fans have vented on social media when players have seemed to lack effort during games or made comments that indicated there was a huge disconnect between what the coach was saying and they were hearing.

Calipari has tried to stay positive. He even went as far as to ask fans to blame him, not the players, for this year’s shortcomings.

“If people are being negative, be negative toward me. Don’t be negative toward the kids. Be negative toward me that I have not figured this out,” Calipari told Tom Leach on his weekly radio show. “I cost us a game against Tennessee; I’ll tell you right now I did. I got all these young guys and Cal it’s your fault we don’t have veteran players. Okay. All the negativity should be geared toward me, not these kids.” 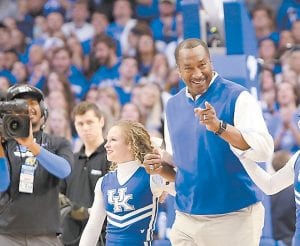 Jack Givens will be back in Rupp Arena Saturday for the 40th reunion of the 1978 championship team. He scored 41 points in the title game win over Duke. (Photo by Vicky Graff )

“This is someone’s child I’m coaching. Our fans, you got to stay with these guys. If we had bad kids, I could see you being mad at them but they’re not bad kids,” Calipari said. “They’re just inexperienced and they’re young. They deserve you (fans) to be with them because they’re representing this state and they’re doing it in a very positive way even though on the court we’re not where we need to be.”

With all the focus on which freshmen — both redshirt freshmen and true freshmen — might help UK next season, don’t forget about two players who will also be back.

Senior Dorian Baker was injured before the 2017 season started. He was being counted on as UK’s go-to receiver. He should be healthy for next season and provide size and experience UK needs.

“Dorian can severely impact the game,” UK Radio Network analyst Freddie Maggard said. “Kentucky lacked a home run hitter and didn’t stretch field last year. Part of it was (quarterback) Stephen Johnson was injured and did not get the football out there.

“Dorian can steady the ship at receiver. He was having a tremendous (preseason) camp until he was hurt. He will be back better than he was. He’s older, wiser and more mature. It’s a (NFL) contract year for him.”

Then there is offensive tackle E.J. Price, a transfer from USC who practiced with the team last year. Maggard said he would “definitely” be a factor at one tackle position.

“Kentucky could go back to a tackle rotation. It could flip guys around and (assistant coach John) Schlarman likes to flip players around,” Maggard said. “E.J. is a highly skilled player. He is all you look for in a tackle. Physically, he is a phenom. If you can block (UK linebackers) Denzil Ware, Josh Allen and Josh Paschal, then you can block anybody UK plays and from all I heard, he’s shown he can do that.”

If you think following Kentucky basketball has been frustrating at times this year, then you can sympathize with Michael Eaves, a southwest Kentucky native.

He’s an anchor for ESPN’s SportsCenter and has been on site at the Winter Olympics in South Korea but continuing to faithfully follow the Wildcats win or lose.

“No matter where I travel for work, I am always keeping up with the Cats. Modern technology makes it rather easy to do nowadays although right now would be a good time to be a bit removed from what’s going on with the team,” Eaves said before UK beat Alabama.

“This recent rough patch has been hard to watch, and to make matters worse, just about everyone at ESPN — particularly SportsCenter — knows about my love for Kentucky, so even if I wanted to ignore these recent losses, they wouldn’t let me.”

He got a reminder about that in South Korea the morning after UK got throttled at Texas A&M.

“The producers popped me on camera before my Olympics segment just so (ESPN anchor) Elle Duncan could give me a little grief about the Cats’ latest loss. But that’s what happens when you represent BBN on ESPN’s campus,” Eaves said.

He was hoping to track down the national championship Kentucky cheerleaders this week while they are in South Korea for an Olympic cheerleading exhibition.

Forty years ago Kentucky had a dominating basketball season that ended with UK beating Duke in the national championship game behind an unbelievable 41-point performance by Jack “Goose” Givens.

He was 18-for-27 from the field but also had eight rebounds — second best on the team — and two assists in the 94-88 win. But what many forget is that Rick Robey also had a fantastic game with 20 points on 8-for-11 shooting and 11 rebounds.

All-American point guard Kyle Macy knew how dominant his teammates were. He took only three shots — and made them all — but he also had eight assists while playing 38 minutes.

If that doesn’t impress you, consider that all five double-figure scorers shot 53.6 percent from the field or higher. Robey led the way at 63.5 percent and Phillips was at 59.5. At the foul line, they all hit 72 percent or above led by Macy at 89.1.

“If you look at the history of college basketball, I just think we kind of get overlooked a lot for what we did that special season,” said Macy.

Author Doug Brunk is trying to help remedy that with his new book, “Forty Minutes to Glory: Inside the Kentucky Wildcats’ 1978 Championship Season,” on the 40th anniversary of that historic season.

“I was attending Wilmore (Ky.) Elementary School when these guys were cutting down the nets in 1978,” Brunk said. “These guys were heroes to me and a lot of Kentucky fans.”

This ranks as my favorite UK team to have covered in my 43 years covering UK sports. It had size, shooting, speed, depth, intensity. Coach Joe Hall pushed his team hard because it wanted to be pushed that hard.

Brunk said there was one obvious message that came across in his interviews with coaches, players and managers from that 1978 championship team.

“It was clear the passion everybody felt for Kentucky,” Brunk said. “It sounds corny, but they were representing the state when they played. Everybody I talked to also said how much more meaningful of an achievement what they did becomes with each passing year.”

There was also a huge historical significance to that championship season.

One story Brunk shares in the book is how Lee almost quit the team during a drill where Hall had players run the steps in Memorial Coliseum and Lee was not doing it properly. Hall called him out

“There was a little altercation and he (Lee) walked off,” Brunk said. “He drove home (Lee was from Lexington) but when he got home his father’s car was blocking the driveway. His father, a minister, was sitting on the porch waiting for him. He told James he had to follow through on his commitment to UK or he was not coming back in the house. James went back as he told me and apologized to the team and was let back on the team.

“What remains a mystery today is who called his father. I asked everybody. Nobody knew. But somebody gave his dad a heads up. I still think it likely was (former UK equipment manager) Bill Keightley. Not much got past him.”

Brunk shares how Jay Shidler traveled 150 miles to visit his seriously ill mother on the eve of the national semifinals game against Arkansas and that Scott Courts had to cope with his father’s death days before the championship game against Duke.

The book has chapters from Hall, Givens and former managers about that memorable season.

The team will be honored at Saturday’s game against Missouri. There’s a special opportunity for fans to mingle with the players at Kroger Field in the recruiting room from 1-4 p.m. Saturday. Cost is $150 (admits two people) and will include a signed copy of the book, a 1978 commemorative print and an autographed basketball to the first 300 participants. Food and beverage included (there will be a cash bar).

Brunk will also be signing books at Your Frame of Mind Gallery in the Rupp Arena shops starting at 5:30 p.m. Saturday. On Sunday he’ll be at Joseph-Beth Books in Lexington at 2 p.m. and some team members may also attend. On Monday he’ll be at Brier Books in Lexington from 6-7:30 p.m. with Givens and former student managers Rob Bolton and Mike Murphy, who all have chapters in the book. Finally on Tuesday he will be in Louisville with Givens and Lee from 6-7:30 p.m. at the Filson Historical Society.

Quote of the Week: “Teams that succeed can make the 3, and that has been a nightmare for them this year. At times they tease you, but the stat sheet doesn’t lie after all these games. That’s the biggest thing wrong with them,” ESPN analyst Dick Vitale on what he thinks has been UK’s biggest problem this year.

Quote of the Week 2: “He’s good with the family, which with me getting into my late 40s and having kids, that’s important to me. I want to spend some time with them before they get out of here. Mark has always been a family guy and he took that after his two older brothers and his dad.” New UK assistant coach Michael Smith on UK head coach Mark Stoops.

Quote of the Week 3: “Why aren’t (the referees) in here answering your questions? We’re gonna bring 19-21 year olds in here who don’t get paid and you’re gonna ask them questions… because (the referees) don’t want to get asked ‘why didn’t you call this?’” West Virginia coach Bob Huggins after Kansas had a 35-2 advantage at the foul line in a comeback win over his team.