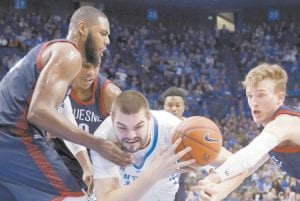 Kentucky’s Isaac Humphries, center, was pressured by Duquesne’s Darius Lewis, left, and Spencer Littleson during the second half of their game in Lexington Sunday. Kentucky won 93-59. (AP Photo/

The recruitment of 6-5 Chattanooga guard Shai Alexander was like a “rocket ship movement” in the last year and he finally landed at the University of Kentucky.

“Over the past year he has gone from somebody nobody knew with low major recruitment to a high level top 50 player in the class,” said Zach Ferrell, Alexander’s coach at Hamilton Heights. “His size for a point guard is awesome. He has a great work ethic and knows how to treat teammates. He’s a great person.”

This is Alexander’s second year with Ferrell and the coach says despite reports that Alexander is a combo guard, his best spot is at point guard.

“Point guard is his natural position. As a point guard, he’s everything you want,” Ferrell said. “He understands the game. His vision is fantastic. He loves to get his teammates involved. He has a 6-10 wingspan and has the potential to be a phenomenal defender.

He averaged 15.8 points, 4.8 rebounds and 4.8 assists per game for Team Portis Wings Elite in the Nike EYBL last travel season and despite weighing only about 170 pounds can finish at the rim and doesn’t shy away from contact even though sometimes he can be overpowered.

Ferrell says his outside shooting has improved and can still get better.

“He has gotten more confident in his shooting,” the coach said. “It’s not the best part of his game, but it is definitely a tool he can use.”

Ferrell said Alexander, who is from Toronto, is a much more confidant player now and has also grown since arriving in Chattanooga.

“With every college freshman, there will be an adjustment period. But he does not get caught up in the limelight or spotlight he’ll be in at Kentucky. He’s very low key and down to earth. He will be able to thrive in that environment,” Ferrell said.

The four-star Alexander once verbally committed to Florida before changing his mind and picking UK over Syracuse, Texas and others. He’s a consensus top 50 player. He likely will be ranked much higher when the season ends because he spent most of the summer playing with the Canadian Senior National Team. That gave him an opportunity to play against older NBA players like Tristan Thompson, Cory Joseph, Tyler Ennis and Anthony Bennett.

Fans at the Marshall County Hoop Fest will get to see him play December 2 at 5:30 p.m. CST against Prolific Prep out of California and December 3 at 8 p.m. CST against Hillcrest Prep out of Arizona that features 7-0 Arizona commit De’Andre Ayton, the top-ranked player in the 2017 recruiting class (call 270-527-6714 to purchase tickets in advance).

Hamilton Heights will play December 1 in Memphis against Memphis East on ESPN2.

“That will be a heck of a stretch for us,” Ferrell said. “We’ll be doing some sleeping on the bus. We’ve not been to Hoop Fest before but I know what a quality event it is.”

Hamilton Heights has two other Division I signees — Nick Alexander-Walker, who is ranked No. 29 in the ESPN top 100 and will play at Virginia Tech, and Therren Shelton-Szmidt, who will play at Middle Tennessee. The Hawks have seven players with Division I offers and a solid group of younger players.

“We push the ball. Not like Nolan Richardson did at Arkansas, but we play at a good pace,” Ferrell said. “I hope fans will see a hard working group of kids that they can see enjoys playing together.”

Could he knock Adebayo around?

“No. He won’t knock Bam around. Nobody is knocking Bam around,” Fox said.

“The Wildcats have had a major presence recruiting-wise in New Jersey for some time now, and once they got involved with Richards, it seemed like they were a favorite. His athleticism, energy, motor and size should make him a good fit for the way Kentucky plays,” Schneider said. “Richards is still raw but his offensive game is definitely improving. He’s shown a lot of growth and is looking much more comfortable on the court.”

Richards has been playing basketball only four years — another reason Schneider thinks his best days are ahead of him.

“He can take over a game now and it is kind of scary how good he is considering he has not been playing the game that long,” Schneider said. “He has taken a major leap in his comfort on the court and understanding of the game. He’s more of a player now instead of just an athlete.

“I think when he puts it all together he will be a major offensive threat. I don’t know if he will ever be a team’s No. 1 option on offense, but he is so explosive around the rim that he will always make an impact on put-backs and cleaning up around the basket.”

Kentucky also got Las Vegas forward P.J. Washington and then surprised many by getting Philadelphia point guard Quade Green on Saturday. He had been considered a definite Syracuse lean and is regarded as the top point guard in the 2017 class. Not only that, but adding him could help UK with several other five-star players.

“It’s amazing what Calipari does,” one college coach told me Saturday. “He is going to lose about his whole team, comes into the signing period with no commitments and now has three five-star guys and a fourth one (Alexander) who will be when the season ends. Just amazing.”

Sometimes I think we forget the bond that teammates forge, especially in football, which is so physically, and mentally demanding.

Kentucky started horrible against Austin Peay but won 49- 13 to become bowl eligible for the first time since 2010 going into this Saturday’s game at Louisville.

But what impressed me was the way younger players talked about wanting to win the game for the seniors in their final home game.

“I heard a lot of the seniors earlier in the season talking about they wanted a bowl. Last night Jojo (Kemp) and I were talking about it. So, being able to get that win, it makes me feel really good the seniors were able to go through this,” freshman running back Benny Snell said after he scored two touchdowns and went over 1,000 yards rushing.

“These seniors really deserved it. They put so much hard work and dedication into this season,” sophomore cornerback Chris Westry said. “What the fans don’t see on a Saturday is the summer workouts and practices we do. These guys have been here for four plus years. This is a good experience for them to go out with something they didn’t have. It just feels good.”

Junior running back Boom Williams could opt for the NFL. But after the win over Austin Peay he, too, was happy for his senior teammates.

“We were very loud. Everybody is happy. Most of all we’re happy we have to do it for our seniors,” Williams said. “They’ve put a lot of work into this program since they got here so we just want to make sure we send those guys out on the right note and be able to give them an extra game.”

Now Kentucky has done that, gets 15 extra practices before a bowl game and has a chance to lay the foundation for an even better 2017 season.

Kentucky has had some terrific linebackers in recent years — Wesley Woodyard, Danny Trevathan, Avery Williamson and Josh Forrest are all playing in the National Football League now.

But none were more fun to watch play than current UK sophomore linebacker Jordan Jones. He probably reminds me more of Trevathan than anyone else because of his speed that lets him make tackles all over the field. Once he gets the wisdom of Woodyard and Williamson, he’s going to be really special.

One trait he shares with all the former UK linebackers now in the NFL is the enthusiastic way he plays and inspires teammates.

“I think that enthusiasm can be contagious. So, when there’s one player out there that’s extremely enthusiastic then it just starts to wear off on everybody else,” Kentucky defensive coordinator D.J. Eliot said.

The UK coordinator says he cannot remember a time when he’s had to try and curb Jones’s enthusiasm on the field.

“He hasn’t had any foolish penalties, he hasn’t had any plays that I think were due to overexcitement. You know what I mean? I think he’s played hard and has played with the energy that we’re looking for,” Eliot said.

When freshman De’Aaron Fox had 12 assists in his UK debut, it was originally thought he had broke the record (10) set by former UK All-American Kyle Macy in 1977 during his first UK game. Later it was noted that Dirk Minniefield actually had 11 in his UK debut.

Still, I couldn’t help asking Fox if he knew he had broke the record.

“I don’t know who it was that had the record. I just heard it was 1970-something when it was set,” Fox said.

Remember that Macy was one of the most popular players to ever play at Kentucky. He was adored by female fans — and still is by many. He went on to play in the NBA and overseas. He was the head coach at Morehead and has worked as a TV analyst.

A lot of coaches are praising Kentucky sophomore Isaiah Briscoe and a lot more will be soon if he keeps playing the way he has. However, only one of those coaches — Stephen F. Austin’s Kyle Keller — actually did it during a game.

“I told Briscoe during the game ‘Dude, you’ve gotten so much better.’ You could guard Briscoe with your arms behind your back (last year) and you can’t do that anymore,” Keller said after his team lost to Kentucky.

Briscoe said it was an honor to hear something like that from any coach.

“It did not really surprise me. I did thank him for the compliment. It did make me feel good. I have been working hard and it is showing,” Briscoe said.

But has he ever had a coach say something like that to him during a game?

“No, I’ve never had a coach say that during a game. It’s a little unusual. I can’t even remember when it was (in the game). I just remember looking over and he said, ‘Briscoe, you have got better,’ and I told him I appreciated it and just kept playing,” Briscoe said.

“He is a great coach, great basketball mind. His history at Kentucky, Arkansas (coaching) and Florida (coaching) is impressive. His understanding of the game just comes naturally to him,” Norris said. “All in all he’s a great guy. Good heart. We are just excited to learn from him.”

Norris says Pelphrey does not talk much about his UK career.