Calipari pleased with No. 3 Kentucky’s progress 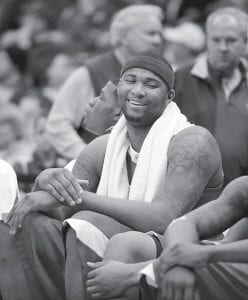 Kentucky forward DeMarcus Cousins (15) relaxed on the sideline as the time wound down in UK’s 81-55 win over LSU. (AP Photo)

The No. 3 Wildcats are just as deadly without their star point guard playing to his potential.

In his worst appearance of the season, Wall scored six points in Kentucky’s 81-55 romp against LSU on Saturday. Despite a poor night for the freshman, who ranks among the Southeastern Conference’s top 10 in five statistical categories, the Wildcats still managed a 22-0 first-half run and kept LSU to just 27 percent shooting after leading by as many as 33.

With fellow freshman Demarcus Cousins notching his sixthstraight double-double against the Tigers, Wall learned that he doesn’t have to carry the Wildcats.

“He is finally understanding that he doesn’t have to play up to the hype,” Kentucky coach John Calipari said. “Now he’s running our team the way it needs to be run.”

Against North Carolina earlier in the year, the Wildcats lost a 19- point first-half lead while Wall was in the locker room 20 minutes being treated for dehydration. Kentucky barely won after Wall hit critical free throws down the stretch. At that point in the season, it looked like Wall was the key to Kentucky’s success.

But the Wildcats no longer need their point guard to carry them now that’s he’s learning to support them. As Wall’s scoring output drops, he’s getting more assists, and he now ranks second nationally in that category.

“We do need everybody on this team to win a game, and people forget that,” said freshman center Daniel Orton. “(Wall) didn’t show up in the point category (against LSU), but he always shows up everywhere else. He puts you in a position to score.”

Placing the team first and his scoring second has also put Kentucky (22-1, 7-1 SEC) on track to vie for a top seed in the NCAA tournament come March. The rest of the team has also improved with Wall no longer focusing on trying to score.

Cousins has emerged as the Wildcats’ biggest weapon, averaging 16.4 points and 10 rebounds. Calipari said the freshman just keeps getting better.

“I’ve not had a guy come together that fast,” he said.

Then there’s the rest of the Wildcats. Against LSU, Kentucky’s reserves combined for 22 points.

“We’re all coming along our own ways and everyone is coming together,” Orton said. “We’re all just getting into our grooves and understanding how to play at a high level.”