Call for autopsies in still births 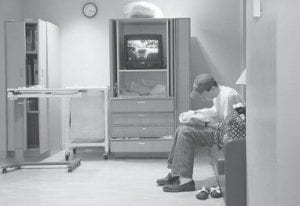 In this photo provided to the AP by the Owen family, Rob Owen held his stillborn daughter Clare Elizabeth Owen, March 7, 2008, at Holy Cross Hospital in Silver Spring, Md. This photo was taken by the mother, Erin Fogarty Owen, from her hospital bed.

Adding to the devastation of her daughter Clare being stillborn is the fact that Erin Fogarty Owen doesn’t know why: What went wrong in a pregnancy that seemed textbook?

And that unknown means Owen is facing her new pregnancy with as much fear as joy, repeating what she calls sanity sonograms for reassurance that this baby’s still fine.

More than 25,000 U.S. babies a year are stillborn, and in more than a third of the cases doctors can’t find an explanation. New guidelines for obstetricians aim to help change that with a too often taboo recommendation: Gently urge more parents to accept an autopsy to help unravel this mystery killer, so that maybe doctors can start preventing it.

Even an autopsy doesn’t always give an answer. It didn’t explain why Clare Owen died.

The hope is that if more are performed — and done better, to the same set of standards — scientists might finally have enough tests to compare and uncover risk factors that doctors today know nothing about.

“We need some answers,” says Owen, of Arlington, Va. “It all starts at the bedside of the grieving parent who’s just been told her baby is dead.”

The new guidelines from the American College of Obstetricians and Gynecologists come as bereaved parents and child advocates are pushing to break the silence that surrounds those deaths.

“People don’t want to frighten their patients near the end of pregnancy,” says Dr. Ruth Fretts of Harvard Vanguard Medical Associates and the Harvard Medical School, who led the new guidelines. “So basically the issue about late stillbirth is generally not brought up. We’ve been afraid to talk about it.”

Among Fretts’ top questions: Should older and other higher-risk mothers be induced before their due dates? And some doctors order women to count their babies’ kicks in late pregnancy while others don’t. Should they, and what tests are needed to tell if dwindling movement means trouble or a false alarm?

“My dream of being a mother will soon be here,” Owen signed off her online journal at 2:39 a.m. on March 7, 2008, while feeling early contractions.

She’d woken her husband, Rob, shortly after her optimistic signoff and headed for the hospital — where they almost immediately learned Clare had no heartbeat.

“My beautiful, kicking, active, hiccuping little girl was dead,” she wrote, returning to her journal as catharsis.

Most at risk are black women — they have roughly twice the rate of stillbirths as other U.S. women — and mothers age 35 and older, even if they seem just as healthy as younger women. Obesity, diabetes and high blood pressure also increase the risk.

Birth defects, problems with the placenta and too little fetal growth account for many stillbirths. But there’s been no progress in a decade in explaining the rest, babies like Clare Owen who appear normal despite intense testing and whose mother’s only risk factor was age, 37.

Few stillbirths occur during labor in developed countries. Usually a woman has labor induced after her baby has died.

Early into hours of labor, Owen vividly remembers a comforting nurse rubbing her arm while asking her to consider an autopsy to find out what happened. Owen didn’t hesitate; she needed to know.

Fretts estimates a third of mothers never get asked about an autopsy, and there’s no good count of how many are done. It’s a delicate issue for families who may know the procedure only from grisly TV crime shows. The guidelines stress explaining that such testing can be crucial to calculating future pregnancy risk and needed care, and is conducted with respect. Families who reject a full autopsy should be offered alternatives, such as fullbody X-rays and biopsies, the guidelines say.

An autopsy isn’t immediate. The Owens spent seven hours with Clare to say goodbye. Complicating the choice, insurance doesn’t always pay — Owen’s did — and the tab can reach $1,500.

Moreover, Fretts says most death certificates are filled out before a stillbirth assessment is completed, meaning scientists culling them for new clues never see key information.

“That isn’t good enough,” says Owen, frustrated that Clare’s autopsy merely ruled out known stillbirth causes. The main clue was that Clare weighed almost 11 pounds, startling for slim parents. “We need to get together and come up with better answers.”

To help, Sen. Frank Lautenberg, D-N.J., is writing legislation that aims to increase stillbirth research and public awareness. Also, the March of Dimes is designing a Web-based tool to one day guide women in asking relatives about miscarriages, stillbirths and other family conditions, helping doctors better determine their risk and alter prenatal care accordingly.

For now, Owen is hanging onto sympathetic care from a high-risk OB practice that allows repeated reassurance sonograms during her new pregnancy — and figuring out how to handle well-meaning “is this your first” queries from strangers.

“Do I, you know, bring this person down by saying, ‘Oh no, we have one in heaven and we hope that we get to keep this one?’ I can’t deny Clare’s existence, but it’s also very uncomfortable,” she says.