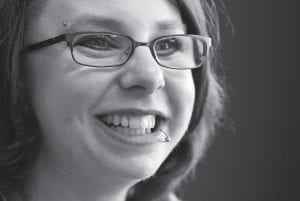 Michelle Knight, who now goes by the first name Lily, spoke with reporters in June 2014, a little more than a year after she and two other kidnap victims were rescued in Cleveland. (AP Photo)

Her name is Lily now, named for her favorite flower.

To appreciate how startling it can be to first meet this confident, effusive young woman, consider this excerpt from her memoirs, written under her former name, Michelle Knight:

“Do you have any idea what it’s like to wake up and realize that no one is going to rape you that day? How wonderful it is to see the sunlight pouring through your window? How great it is to just walk around without a heavy chain on your wrist or ankle? It feels amazing.”

She wrote that in her 2014 book, “Finding Me: A Decade of Darkness, a Life Reclaimed,” which chronicles more than a decade of captivity, rape and torture at the hands of a man whom she identifies in the book only as “the dude.”

Let’s leave it at that. Anyone paying half-attention in 2013 knows he was the man in Cleveland who kidnapped Knight in 2002, Gina DeJesus in 2004 and Amanda Berry in 2003 and imprisoned them in his hellhole of a house until police rescued them in May 2013.

To avoid the death penalty, he pleaded guilty to 937 counts — including rape, murder and kidnapping — and was sentenced that August to life in prison without the possibility of parole. Unable to endure a captivity that was far more humane than he had ever allowed for these women, “the dude” hanged himself the following month.

Knight’s ordeal will reach a new crescendo of national attention later this month, when Lifetime debuts the movie “Cleveland Abduction.” Taryn Manning, one of the stars of Netflix’s “Orange Is the New Black,” plays Knight.

They are fast friends, Knight says. She is “nervous but excited” about the movie. Her constant mantra: “If it can help others…”

I first talked to Knight three weeks ago at the Cleveland Rape Crisis Center. I had agreed to interview her onstage for the center’s annual luncheon fundraiser, but she needed to meet me first. Trust is an issue, always — starting with her horrific childhood — but I was struck by how easily she made conversation. She is doing the hard work of healing. For that, she gives much of the credit to psychologist and television personality Dr. Phil — Phil McGraw — whom she calls her hero.

The admiration, McGraw told The Plain Dealer via email, is mutual. “When you listen to her describe the horrible living conditions and how she was treated, you wonder how anyone lasted a day let alone more than a decade. In the 12 years of doing the ‘Dr. Phil’ show, no one has changed me like Michelle Knight and her story of survival.”

Knight’s agenda is as simple as it is relentless. “I’m a trauma survivor,” she said. “I don’t want to be sheltered by what happened to me. And as long as telling my story can help others, I’m going to keep doing this.”

The CRCC event held recently broke records of attendance and fundraising. When Knight walked across the stage in the Renaissance ballroom, the crowd rose to its feet in prolonged ovation. She looked out in amazement, tears filling her eyes.

There is a giant grace to this physically tiny 34-yearold woman. She is quick to laugh — to giggle, really — and never tires, it seems, of thanking others for caring about how she is doing.

On that day when we first met, she talked a lot about what she has learned about herself and about the process of starting over.

“For years, I didn’t have any faith,” she said. “It took this situation to help me find my faith. Despite everything I was going through, I didn’t die. I realized there was a reason God wanted me to live.”

She is used to people dismissing their own problems in light of what she has been through, but she rejects the comparison. “All pain matters,” she said simply. “It’s not a contest.”

When Knight finally escaped her captor, some news outlets depicted her as mentally impaired. It still hurts, she says, to know that. Her captor had rammed a barbell into her jaw, which is why she struggled with speech in the immediate weeks after her release.

She has recorded her first song, “Survivor,” which she plans to release next month.

She’s no longer afraid of grief. She’s learned that inviting it in is the quickest way to usher it out the door.

And when she sings, as she so often does, she closes her eyes and smiles like the little girl she never got to be.