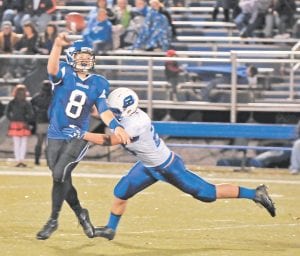 Letcher Central’s Houston Watts found himself under pressure many times while quarterbacking the Cougars in their final two games of the 2013 campaign, including a 53-22 loss to Breathitt County in the regular season finale (pictured here) and a playoff loss to Madison Central. (Photo by Chris Anderson)

Now that Tuesday night’s prime time special between the nation’s top two teams in college basketball is behind us, the University of Kentucky Wildcats will return to Rupp Arena this weekend for an odd Sunday night tip-off (7 p.m./ ESPN 2) against Robert Morris University — remember them? — marking the first of four consecutive games in this year’s inaugural Bill Keightley Classic.

UK has now played five games (two of them being of the exhibition variety) versus outside competition and it appears the game day rotation is headed in the direction of the seven-man variety with a strong possibility of 6-9 freshman forward-center Marcus Lee making it an eventual eight-man rotation. I doubt it will ever get any higher than eight even with the talent this team has. It is just too difficult to stabilize team chemistry and individual player roles with more than eight players, but the good news is there are plenty of quality multi-talented bodies down the bench if needed.

It appears the late game go-to man that neither Wildcat Coach John Calipari nor any other NCAA coach likes to talk about but every team has is going to be 6-10 freshman phenomenon Julius Randle. Going into the third regular season game Randle had managed to post 22- and 23-point efforts while pulling down 13 and 15 rebounds. Sophomore center Willie Cauley- Stein and freshman center Dakari Johnson, both seven- footers, should be a two-headed monster of a nightmare for UK opponents this year. I think their own individual talents will compliment one another very nicely in the low post areas of the free throw lane.

The Harrison twins from Texas, although young in age and college game experience, are very advanced in their skill levels and physical size and abilities. Between the two of them they should hold down the point guard responsibilities just fine. And if a few quality emergency minutes are needed on certain occasions, Cal has an experienced senior in Jarrod Polson or an extremely athletic freshman in Dominique Hawkins to fill the role.

If a second go-to man is needed, freshman wing James Young may be the best perimeter player to wear the blue and white in several years. His smooth yet quickrelease shot has been impressive for the most part in the early games. As with all shooters, consistency will need to be displayed as the season moves forward but I don’t see a problem in that area.

However, the player who may define this team at the end of the season, especially during March Madness, is forward Alex Poythress. The 6-8 sophomore has a unique combination of skills. He has the raw physical size and toughness of a rugged power forward, but can also be very effective from the baseline all the way out to 20 to 22 feet with his jump shot. Of most importance to this team is his mindset in accepting the sixthman role held by Darius Miller during the 2012 NCAA championship run. If Poythress accepts this role and produces like Miller did, Big Blue Nation may be bringing back a large ten-gallon cowboy hat from Dallas next March with “NCAA Champs” written across the front of it.

But that’s a big “if” and only time will tell, so let’s enjoy the ride. It should be eventful all the way through to March.

Special Notes: This coming four- game stretch of the Bill Keightley Classic can be seen live on TV but it will be on four different networks so be sure and consult your local TV listings the morning of each game. … Keightley was known as Mr. Wildcat, and was UK’s equipment manager from 1972 until his death in 2008. He started with the program as assistant equipment manager in 1962.

Vanderbilt University is one of the very few football venues that was cordial to UK during the ’70s, ’80s, ’90s and the recent Rich Brooks era, but so far in the brief James Franklin coaching era it has been very difficult for UK to even compete with the Commodores no matter where the game is played.

I think it’s high time for this series to return back to its old ways and it says here it will. This year UK heads to Nashville for the first time under the direction of Mark Stoops to tangle with the Commodores. Until last Saturday it appeared on paper like the proverbial tossup until Vandy pulled the upset of the school’s gridiron history by beating Florida down in “The Swamp” by the score of 34-17. But there was a reason for that upset: Florida turned the ball over to the Commodores four times, three of them in Vandy’s red zone on the 4, 10, and 22 yard line. Giving away three touchdowns is hard for even an Alabama-type team to overcome.

Basically the game was a real fool’s gold type win for the Commodores, but nonetheless a win. Vanderbilt had 183 total yards offense against the Gators while Florida’s much maligned passing game cranked up over 300 yards against the Commodores. One of the things this UK team has done is keep turnovers down, going a four-game stretch earlier in the season without committing any.

If the Cats can go down to Nashville and minimize their turnovers, you can expect the game to go into the final quarter as a tossup with whoever wins the 4th quarter winning the game. Call me crazy if you want to in picking the Cats to beat Vandy in the same year that Vandy has beaten Georgia and Florida, but so be it.

Vanderbilt is 5- 4 and will be trying its best to get a win Saturday and set themselves up for a possible bowl bid south of its own state’s boundaries, but the Commodores still have Tennessee and Wake Forest on their schedule to pull out that coveted seventh win even with a step backward this Saturday.

I think something good is about to finally happen to UK football and it will be in Nashville this Saturday, say to the tune of UK 31, Vanderbilt 28. And it may not be the Wildcats’ only SEC win of 2013.

Saturday’s game with Vandy is the SEC game of the week and will be televised live on the SEC network.