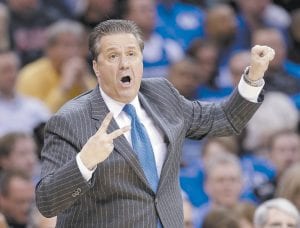 Kentucky coach John Calipari, shown here directing his team against Notre Dame, has changed his platoon system used most of the season to a nine-man rotation during the NCAA tourney. (AP Photo)

John Calipari’s platoon system has given way to a nine-man rotation that gives the Kentucky coach plenty of combinations.

Who plays and how long hasn’t mattered to the topranked Wildcats.

Platooning has been replaced by the immediate challenge of winning the school’s ninth championship and remaining undefeated along the way.

The egos that were checked early have remained on the shelf during the NCAA Tournament as Calipari has let the flow of the game dictate his substitution strategy.

“That’s what makes him such a good coach,” reserve 7-footer Dakari Johnson said Tuesday of Calipari. “He knows what’s best for us. He’s going to do everything for the team to win. He’s going to put the guys in there that are going to battle and just compete.”

The challenge for Wisconsin at this weekend’s Final Four in Indianapolis is figuring out which combination they’ll face from Kentucky, which can play small, in half-court sets or uptempo.

The Wildcats and Badgers met in last year’s Final Four with Kentucky advancing behind an exciting 74-73 victory. This Kentucky squad is even deeper.

Calipari began the season able to go 10-deep with his roster, so platooning gave him a way to give everyone enough minutes to be happy and win games. Rotating players in and out has just given him more options — and helped the Wildcats stay unbeaten at 38-0.

“We coach every player on this team like they’re a starter,” Calipari said. “There’s no one coached — we don’t have subs. I’ve said that statement before. We have reinforcements. We’ve got them and you look up and there’s about 12 tanks coming over the hill. … That’s what we’ve been doing.”

Kentucky played the season’s first few weeks with Calipari replacing his entire starting lineup after about five minutes into the game, sooner if he wasn’t getting the results or energy he wanted. Calipari has also platooned against weaker schools, beginning both halves with the approach.

A season-ending knee injury to junior forward Alex Poythress in December thrust 6-foot- 10 Trey Lyles into the starting lineup, changing substitutions to whatever the matchup or situation demanded.

And in the NCAA Tournament, the combinations have worked for Kentucky.

There have been times where the Wildcats have featured a three-guard lineup with 6-6 twins Andrew and Aaron Harrison and 5-9 Tyler Ulis together in the backcourt, or some twoguard combination of those three along with shooter Devin Booker. Kentucky has also gone to their big-man lineup, pairing Johnson and fellow 7-footer Willie Cauley-Stein for short stints, and blended them with 6-11 Karl-Anthony Towns, 6-9 Marcus Lee and Lyles in two- or three-man sets.

“He doesn’t get enough credit for his coaching,” Michigan State coach Tom Izzo said. “For all the pluses of knowing that maybe you got better talent than most teams, you also got other issues. I don’t know many guys that could have juggled that at Kentucky like he has.”

Calipari’s mixing hasn’t hurt overall playing time for the Wildcats’ nine regulars, who average 11.1 to 25.8 minutes per game. But players such as Cauley-Stein and Ulis have each logged 30- plus minutes at least once while Lee and Johnson have seen their time decrease.

Johnson isn’t concerned because the Wildcats are still winning, which is all that matters.

“When you come here, he’s going to put you into position to succeed,” he said. “You’ve just got to embrace it and buy into the team culture.”

The Wildcats certainly had to buy into teamwork during Saturday night’s tense 68-66 Midwest region-clinching victory over Notre Dame, a game that Calipari admittedly tried “every combination I could” to stay in a contest they trailed by six points with just over six minutes remaining.

The coach continually shuffled players in and out down the stretch and got results on both ends as Kentucky made its last nine shots along with several crucial defensive stops to remain unbeaten. Nobody talked about minutes afterward, just that every hand on deck participated.

It’s been that way all season, in any combination.

“Being on a team like this where we’re winning, making history and sharing, there’s nothing like this,” Booker said. “I’m enjoying the moment.”