Cal’s team has ‘little bit of everything’ 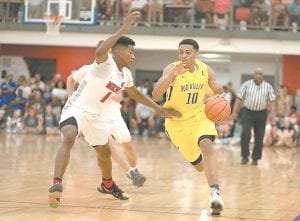 Keldon Johnson, right, is one of seven McDonald’s All-Americans on the Kentucky roster. (Oak Hill Photo)

Many college basketball analysts projected before the start of the 2017-18 season that SEC basketball would be even better in 2018-19.

The SEC sent a conference record eight teams to the NCAA Tournament last year, but preseason projections make it seem like this year could indeed be even better with Kentucky No. 1 in most early preseason polls, Tennessee in the top five and Auburn in the top 10. LSU, Mississippi State and Florida are all in some top 25 polls.

“Any time you have high-end teams and are building off a record eight teams in the NCAA, people around the nation are going to take notice,” said LSU coach Will Wade. “The SEC teams that played in the Big Eight Challenge last year played great to help move the narrative of SEC basketball.”

“This is going to be the most competitive year that I can remember because of the quality at the top of the league is going to be even stronger,” Pearl said.

Kentucky coach John Calipari has never been shy about promoting SEC basketball — or pointing out the need for the league to improve when it was not generating national buzz.

Calipari certainly isn’t backing down now, either. He’s hyping his team as much as the early preseason polls are. He’s taken his players to basketball camps across the state to let them understand the passion of UK fans and even let them stop in Midway to sign autographs when the team rode a train from Lexington to Frankfort and back.

“The reason I did it, initially, was because I wanted time with them and we did a lot of team building. Part of that was talking about the expectations that are always on this program and what they want this team to look like defensively. What do you want this team to look like offensively?” Calipari said. “(We) had them talk and communicate so that they can say, ‘Alright, now we know where we are building.’ What we want to do.” 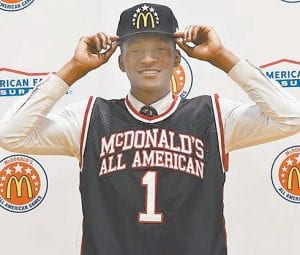 New Georgia coach Tom Crean says not to underestimate the value of off-season interaction between players and coaches.

“Just being in workouts and conditioning, you almost learn more about them there than you do on the court,” Crean said. “It all goes hand in hand. It’s conversations you have in the office.”

Calipari said he has felt the pressure personally to win a championship every year he has coached. He joked UK probably has been ranked No. 1 in six or seven of his 10 seasons at Kentucky when the Cats went to four Final Fours and won the national title in 2012.

“Probably could have won a couple of more but didn’t. It is what it is. And these guys know it,” the UK coach said.

He has a roster that looks 10 deep and admits his team will have a “lot of weapons” to use next season. He’s already told his players he would like to have six or seven players averaging in double figures.

“There’s no one who is going to average 25 a game. You might get 25 in a game, but we don’t play through two guys. Everybody here is treated the same way,” Calipari said. “If you don’t deserve to play, you won’t play. If you do deserve to play, I’ll figure it out.

“The biggest thing I had to talk to them about is here’s what the culture of Kentucky is. It won’t carry you. You have to carry the culture. You have to take it to that next level. If you don’t move this culture, this culture means nothing. But this is what we built the program on and around.”

Wade can’t speak for what having sophomores P.J. Washington, Quade Green and Nick Richards back for a second season along with redshirt freshman Jemarl Baker can mean for Kentucky this year. However, the LSU coach does understand the value of experience.

“Just to have some experience helps. If we are going to be good a lot of it will be on the shoulders of guys in program last year,” Wade said.

Calipari has preached the same thing about Kentucky but he’s also not bashful about the amount of talent he has this season. The Wildcats have seven former Mc- Donald’s All-Americans on the roster; only the 2014-15 team that finished 38-1 had more with nine. The 2013-14 team also had eight and it made the national title game.

Washington, Green and Richards were all McDonald’s All- Americans along with freshmen Keldon Johnson, Immanuel Quickley and E.J. Montgomery. Stanford transfer Reid Travis was also a McDonald’s All-American.

Freshman Ashton Hagans would have been if he had not reclassified from the 2019 recruiting class to the 2018 class, and freshman Tyler Herro played in the Jordan Brand Classic after not making the McDonald’s Game.

“Normally in the summer I back up and get away but with this group I told them I’m kind of excited to be around them,” Calipari said. “Got a little bit of everything. Should be physically strong. We should be long. Got some quickness. A bunch of guys that can make shots. It should be interesting.”

Kentucky is going to have a wealth of talent at guard next season and that includes freshman point guard Immanuel Quickley.

He’s not generating quite as much hype as some other UK freshmen, but don’t discount what he could do for UK. He was a McDonald’s All-American and five-star signee.

ESPN recruiting director Paul Biancardi likes a lot about Quickley’s game. He calls him a “high IQ” point guard who compensates for not being as athletically gifted as some other UK guards.

“He’s really fluid, and don’t forget that he will make open shots, something Kentucky fans are really going to like,” Biancardi said. “He’s a very steady guy that you can count on. He’s just consistently good.

“He’s going to bring it every day in practice. He won’t impress you with athleticism and he won’t create a lot of space for himself to get shots on the floor. But he knows how to play. He hits the open man off the screen with great passes. He drives and dishes to the open man. He really makes good decisions and that’s what Cal wants in his point guard more than anything else.”

If George Adams had his way, his son Jamal would have played college football at Kentucky. Instead, he went to LSU, earned All-SEC and All-American honors, and signed a $22 million deal with the New York Jets after he was a first round draft pick in 2017.

“Me and my wife were there for the process but I told him he had to make that decision for himself. If something we had I did not want him to blame it on us. I would have loved for him to be at Kentucky. My immediate family is still in Kentucky. It would have been great.”

George Adams played with the New York Giants but has now reversed course with his feelings about the Jets.

“Back in my day as a player, I did not like the Jets at all. Now I’ve got to love the Jets. I wear Jets gear. I am all in, just like I had to be when he went to LSU,” George Adams said.

Adams has always been all-in with Kentucky. Mark Higgs and Marc Logan were younger running backs at Kentucky when he was there and it was his job to get the “tough yards” and let the “young guys” get the long runs.

His roommate at Kentucky was receiver Joker Phillips, the former UK head coach.

“Joker kept me going. He kept my head right. It kept me motivated saying everything would be okay and that I just had to make it happen,” Adams said. “I still talk to him almost every day. He’s my guy.”

Former Kentucky basketball standout John Pelphrey has become an integral part of coach Avery Johnson’s staff at Alabama — which has not been a surprise to Alabama athletics director Greg Byrne.

“I really like him. He is genuinely a very good guy and a good coach. To Avery’s credit, putting him in the position that he has was good for Avery as a head coach and good for our program,” Byrne, a former assistant athletics director at UK, said.

“Who wouldn’t like him? Just as nice a guy as you will ever come across. The kids really like him. He cares about the kids and the game of basketball. He is top notch. We are lucky to have him.”

Pelphrey looks as fit as he did when he was one of “The Unforgettables” at Kentucky that lost that historic NCAA Tournament East Region final to Duke in overtime.

“He could absolutely play,” Byrne said.

Do the Alabama players know how good he was in college?

“I have to imagine when they go to Rupp and see his jersey hanging up there — I don’t care who you are that should say something to you,” Byrne said. “They know he is a great player just like Avery was a great player.”

When a player like running back Damien Harris of Madison Southern or Jedrick Wills of Lafayette leaves the state to play for Alabama, questions pop up about how did Kentucky coach Mark Stoops let two players that talented get out of the state.

Now Alabama has offered Western Hills receiver Wandale Robinson and has a verbal commitment from Glasgow offensive lineman Tanner Bowles. However, remember that Stoops and his staff did go into Alabama to get Bunchy Stallings and Logan Stenberg.

They will be UK’s starting guards again this season and were a big reason that Benny Snell ran for over 1,000 yards last season and hopefully will again. They bring the muscle and toughness to the line needed in SEC play to move those big defensive linemen out of the way.

My guess is that as unpopular as it might be, Stoops would not trade either one of them for the Alabama lineman today.

. Quote of the Week: “I have gotten to know her a little off the course. She is a wonderful girl. She is so sweet and nice. I am sure she is going to have an amazing career. Obviously, I root for nice people and she is one of those people,” LPGA star Brittany Lincicome on LPGA rookie Emma Talley of Caldwell County.

Quote of the Week 3: “He is going to throw his veterans out there and it will be their jobs to lose. The rest have to earn minutes to beat them out. Nick (Richards), P.J. (Washington) and Quade (Green) have put up with him for a year. I have to see the new guys to figure out how good they all are and how’ll they blend in with what Cal wants,” UK Basketball Radio Network analyst Mike Pratt on UK’s potential starting lineup next season.