Cameron among other winners 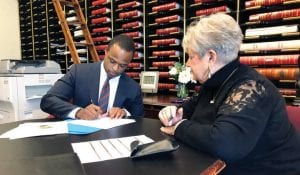 A native of Hardin County, Cameron will face former Kentucky Attorney General Greg Stumbo, who was unopposed in the Democratic primary. Stumbo, who lives in Prestonsburg in eastern Kentucky, was the state’s attorney general from 2004 to 2008. The current attorney general, Andy Beshear, passed on the opportunity to run for a second term to campaign for governor.

In a Tuesday night tweet, Schroder threw his support behind Cameron, saying he was ready to help Cameron defeat Stumbo. Both Cameron and Schroder touted their support for President Trump’s proposed border wall during the primary. Cameron raised nearly twice as much in campaign funds as Schroder, tallying about $344,000 in donations as of May 6.

Kentucky hasn’t elected a Republican as attorney general in 70 years.

In the race for secretary of state, Heather French Henry, a former Miss America and a veterans advocate, won the Democratic nomination.

Henry defeated three other Democratic candidates in Tuesday’s primary. She was veterans affairs commissioner under former Democratic Gov. Steve Beshear and served as deputy commissioner under Republican Gov. Matt Bevin until she resigned to run for office. She will face former state Board of Elections member Michael Adams, who defeated three other candidates in the GOP primary. Adams, a native of McCracken County, also served as a longtime general counsel for the Republican Governor’s Association.

All polls were closed in Kentucky at 7 p.m. The secretary of state’s office was expecting a turnout of about 12.5% of the state’s registered voters.