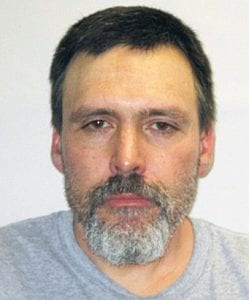 A Camp Branch man was killed early Tuesday morning in an altercation at his home and his brother has been charged with murder.

Kentucky State Police M. Trooper Jody Sims said Post 13 in Hazard received the 9-1-1 call at 4:43 a.m. Tuesday that a man had been found unresponsive in the basement of a house at 339 Cane Hollow. When they arrived, they found Timothy S. Profitt, 42, dead of a single gunshot wound.

According to the citation issued by police, a witness to the shooting was located later who told police he was at the home when the shooting occurred, and that Profitt’s brother shot him.

Police said they located the brother, Eddie Ryan Profitt, 44, also of 339 Cane Hollow Road, and he gave a statement admitting that he shot Timothy Profitt. Eddie Profitt was arrested about 2:20 p.m. and lodged in the Letcher County Jail on one charge of murder.

Renee Campbell pronounced Timothy Profitt dead at the scene. His body has been sent to Frankfort for autopsy.

Eddie Ryan Profitt was charged with drug possession, here and in Ohio. He also faced a weapons charge in Ohio about a year ago, however all of the Ohio charges were dismissed.

At the time of his arrest yesterday, he was on a two-year supervised release for a 365-day sentence in Letcher County in the previous case.

This was one of three shootings in Letcher County in the past week. The other two were not fatal.