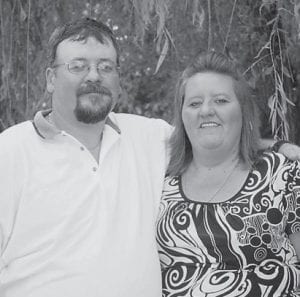 MARRIED — Juanita Fields and Marty Smith were married at Cowan on July 2.

Hello all. I hope each of you had a wonderful Independence Day.

Camping just isn’t for my boys. Don’t get me wrong, they had a blast playing with all the kids, but when it came down to sleeping, it didn’t really happen. They may have slept three hours, and that really is pushing it. By 7 p.m. the following afternoon they were so cranky from lack of sleep and the heat that you couldn’t stand to be around them. We decided just to bring them home. Dalton fell asleep on the ride home and slept almost 16 hours straight. Michael, Bailey, and I didn’t sleep near that long but we were all in bed before dark. If you know my family, you know we had to be exhausted. We are normally night owls.

One of the nights that Missy and her family were camping, they had a very special visitor, a bear! It left prints on her sister-in-law’s van and truck hood.

My brother Wade and his family just made it back from Myrtle Beach. I haven’t had a chance to talk to them yet, but I can’t wait to see the pictures and hear all about their adventures. Welcome home and I hope you enjoyed your fun in the sun. Hopefully you used more sunscreen than Ward did when he and Dwana went. Just teasing you, Ward, but really, you did resemble a lobster.

Vette and Tub Caudill recently took their daughter Gracie to Knoxville Zoo. I saw the pictures from their trip online, and it sure looks like they had a blast. Gracie even rode a camel. Not only is she adorable, she is brave too. Jocelyn, Dennis, and Dylan Watts visited Mt. Laurel Lake and Bad Branch Falls. The photos were beautiful. It looked like they had a very relaxing vacation. The exact kind I like to take.

My brother-in-law, Scott Couch, and his family just made it back from Tybee Island in Georgia. They love it there. I hope to vacation there next year as well. Thanks for the postcards, Melanie!

Mom, Sylvania Whitaker, received some wonderful news this week, she is offi- cially back on the transplant list. When she received her kidney last time, she had only been on the list a couple days. We know that it is unlikely to happen like that again, but that is ok, we are just happy to know there is a possibility that she could receive one someday. God is good!

Mom, my sister Opal and her grandson Hayden, and I went to visit Grandma, Lucy Blair, yesterday. She looked like she was feeling pretty well. I am thankful for that, she hadn’t been feeling well at all lately. Clifford and Debbie Blair came by while we were there and brought their adorable granddaughter with them. It was nice to see them, even if only for a few moments.

Dad and Mom visited with Wilma and Jake Halcomb. Mom said they were doing well and that Wilma was looking the best she has in years.

I had to take Michael to the ER one night this past week. He had a severe allergic reaction to something he ate. It was terrifying. Thankfully, he is doing ok now. We really aren’t sure what he was allergic to, but hope to get him set up for allergy testing soon.

Lisa Hampton was at the ER with her husband Stephen that night as well. He was having problems with his back. I hope that he is doing better. They had their kids with them, and Mark has grown right up. I believe he said he will be a senior this year, and Stephanie was such a doll. She sure kept my boys entertained while we sat in the waiting room.

I hope that everyone took advantage of the rabies clinic that traveled throughout Letcher County on July 10. I know we sure did. The boys and I loaded up our Shih Tzu, Sophie, and took her to get her immunizations and rabies vaccine. I think it is great that they had such reasonable prices and traveled throughout the county so that everyone had a chance to get the shots that their animals needed.

My uncle Johnny Whitaker and his wife Tammy stopped by the other day for a little while. They are always a blast to be around. Tammy knows how to keep you laughing, that is for sure. It was so nice to have company, even if my house was a wreck with all of our camping stuff piled up everywhere. Isn’t that the way it always goes? Thankfully, they were gracious enough to look over the mess. Shame on me for not putting it away as soon as we got home. Mom raised me to keep a clean house and would have died of embarrassment had she been here. Sorry, Mom. I did off er them some food and something to drink, does that make up for it?

It was nice to see Junie and Shequeenia Whitaker. They stopped to speak as they passed by the house on Saturday. It seems that is the only way we ever see each other anymore. We will have to get the kids together soon and let them play.

Juanita Fields and Marty Smith were married on July 2. Congratulations to you two. I hope you have many happy years together.

If I have left anyone or anything out, just let me know and I will be glad you get you next time. I hope everyone has a healthy and happy week. If you would like to contact me, feel free to give me a call or you may email me at alanacouch@ hotmail.com.