Can blood donation affect an athlete? 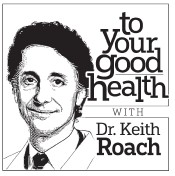 DEAR DR. ROACH: I am a fit 54-year-old male who bicycles a lot. My friends and I are pretty competitive when we do our rides, pushing hard and challenging each other in positive ways. I donate blood as often as I’m allowed. After donating, my legs feel more fatigued when I ride, and I’m not as strong, particularly on the climbs. How long can I use my blood donation as an “excuse” for lacking strength? — A.R. ANSWER: What ultimately determines how much work your legs can do is the amount of oxygen the muscles are able to get, once you have achieved a high level of muscular fitness. The amount of red blood cells in your blood and the amount of blood your heart can pump are the limiting factors for oxygen delivery in a healthy person. So, for a given degree of cardiovascular fitness, your ability to go fast and climb hills is directly influenced by how many red blood cells you have. That’s why elite cyclists sometimes used to get blood transfusions before a race. An extra unit of blood mightmakeonlya3percent difference, but the difference between the winner of the Tour de France and the last-place finisher is right around 3 percent. Unfortunately, too many red blood cells increases the risk for stroke and heart attack, and several amateur and professional cyclists have died as a complication of too much blood transfused or its more modern

equivalent, the hormone erythropoietin, which causes the body to make more of its own blood. Losing blood, from bleeding or donation, consequently reduces performance. The plasma (fluid and proteins) is made up within 24 hours after donating blood, but it takes four to six weeks to regain the blood cells. Donating a unit of blood can save up to three lives. That should give you some consolation. Maybe persuade your friends to donate blood at the same time, so you all are on a level playing field, so to speak.

. DEAR DR. ROACH: I am looking to have surgery on my cervical vertebrae at a prestigious hospital in St. Louis. Before I had even made up my mind, the hospital sent a form regarding arbitration. If anything should go wrong, they want me to agree to arbitration instead of going through the court system. They say the choice is mine. Is this normal preoperative paperwork? — T.B. ANSWER: This is increasingly common, and a brief survey of surgeons gave me

a mixed response — some felt it wasn’t a red flag at all, and others recommending double-checking the surgeon’s record, perhaps through the state medical board. Any disciplinary action must be publicly available, and in Missouri it is freely available on the website at pr.mo.gov/healingarts. asp.

While I understand you might be taken aback by the question, many hospitals are moving toward arbitration as a means of reducing malpractice coverage costs. I personally don’t see it as a reason to be concerned about the surgeon. However, I spoke with an attorney, who advised not agreeing to arbitration, as it isn’t germane to your medical condition.