Can Couch be today’s version of UK’s Blanda? 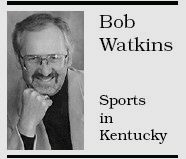 Anybody feel the earth move? Astonishing, the energy invested in stirring racism, more division and hatefulness, all for a ratings bump.

Think Skip Prosser. Wake Forest’s basketball coach had wrapped up a top-rated recruiting season, returned to his office from a jog last Thursday. When he came out again it was in a body bag. Heart attack.

Prosser was 56 and top-tier among college coaches, had a family, host of friends, and lots of money.

Anybody want to discuss Barry Bonds?

Couch has a new opportunity to be second-coming of Blanda. If Couch makes the Jacksonville Jaguars regular season roster, he could be Byron Leftwich’s understudy.

Who’s Blanda? Played for two of the most renown coaches in football history. Was Bear Bryant’s first quarterback at Kentucky in 1946 and captained the 1948 Wildcats. Played for the Chicago Bears, Baltimore Colts and Houston Oilers.

Blanda retired in 1959, but caught lightning in a bottle when the American Football League was formed and he re-joined the Oilers. By 1967 he was a kicker and backup quarterback in Oakland.

Then it happened. 1970. With his field goals and passing arm, Blanda led the Raiders to four wins and a tie in five late season games. He was 43 years old.

Today, second, even third chance George Blanda is in the NFLHall of Fame. His No. 16 at Kentucky is retired.

Diplomacy between rival coaches is collegial and predictable so, what a good idea having ESPN chirper Lee Corso to lay on a bit of candor.

To the delight of fans of both schools, Corso makes UofLa two-touchdown favorite. Card fans have two extra weeks to crow Corso prophecy; Wildcat fans can seethe and blog Corso to death.

Corso had the best view on UofL-UK three weeks into the season. He would rather “… take two teams I could beat the crap out of and then play somebody.”

By 6 o’clock last week, coaches at Eastern Kentucky and Kent, Murray State and Middle Tennessee had scissored and pasted clips onto their locker room bulletin boards. Headline: “Notice, gentlemen, how little Louisville and Kentucky and Lee Corso respect you people.”

Stops Along The Way

Along Kentucky by-ways I encounter remarkable people. Each is a story especially passionate and expert sports fans.

– Bobby Hamilton, Wayland. A Cincinnati Reds and Kentucky basketball fan, Hamilton followed an introduction by handing me an envelope. “This is a letter,” he said, “you wrote me 23 years ago.”

Hamilton unfolded a yellowed newspaper clip of a column that included his contribution to Readers (Right) Write. 1984. Next day, we talked hoops and shot baskets at Wayland’s old high school gym. Priceless.

– Quintessential sports fan? A nominee would be Josh Dixon in Henderson. He follows Notre Dame’s football team and University of Kentucky basketball. Dixon doesn’t only cheer, he offers up straight-forward analysis on teams, players and coaches and is refreshingly unapologetic about stirring in opinions, Priceless.

– Mark Bell, Harlan. Understands game(s), all brands, and people who play, watch or coach them. Savvy enough to realize poking a little fun at VIPs has its place. His e-mails: Priceless.

– Bill Crook, Corbin. In a local newspaper column he has evolved into a kindly and encyclopedic historian for things athletic. His revisits to golden days in sports are just vivid enough to move readers to reminisce and appreciate local heroes of old. At the same time Crook regularly lavishes praise and flowered acknowledgements on those who appreciate and deserve it most, stars and local personalities dating to WWII. Priceless.

– Charlie Thurman. Sonora. The ultimate travel companion in part because he is the ultimate fan, loves Kentucky and is passionate about its rich sports history and heroes. For Charlie, 94- year-old legendary coach Morton Combs at Carr Creek might as well be Adolph Rupp. A trip to Corbin includes (at least) three ‘must stops.’ Lunch at Colonel Sanders; Redhounds football stadium; and a visit with and autograph from Fred Maggard, hero in the 1956 State Tournament. To watch and listen to Charlie … priceless.

The UK legend asked his audience “Who’s in a better position to affect the outcome of games than the officials? You should look more closely at these guys.”

Nineteen years ago. And so it goes.