By LAURA UNGER
The Courier-Journal
LOUISVILLE 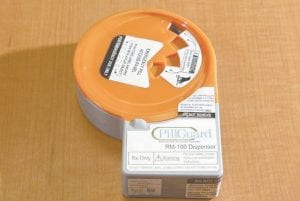 The PillGuard is a prescription-only medication dispenser that can hold up to 60 pills. It requires a PIN to access a dose of medication and will only dispense one dose at a time at the prescribed interval. The unit features multiple tamper detection features. (Photo by Matt Stone/The Courier-Journal)

For the past couple of years, Kentucky has battled the deadly scourge of prescription drug abuse through laws, public education and stepped-up policing, and now a Louisville businessman wants to add a weapon to the arsenal — a safer pill container.

Called the Pill Guard, it’s a “smart” dispensing system that ensures patients get the prescribed dose at the right time, preventing them from taking too many pills too often. The Pill Guard Medication Delivery Systems motto is: “Changing prescription drug abuse one dose at a time.”

“It’s another tool, and it’s the strongest tool out there from a mechanical point of view,” said Roger Hayes, president of the Jefferson County company. “It’s a progression from the ’70s with the child-resistant caps. This is making it adultresistant.”

The company launched the product as a pilot effort in late October, and projects sales will reach half a billion dollars by 2018. Offi cials hope to expand their staff of 13 to 150 by then. Pill Guard’s customers are wholesale pharmacies that ship to retail ones, and its product is part of a small but growing market of smart dispensers.

“ It’s a good idea,” Dr. James Murphy, a pain specialist with offices in Louisville and Southern Indiana, said of such efforts. “It’s another way to control access to these powerful medications.”

But Anthony Westmoreland, owner of two Southern Indiana pharmacies testing the Pill Guard project, said he’s getting mixed reviews, with some patients finding it big and bulky or wondering if the extra steps to get their medication are necessary.

Murphy and Kannan Grant, director of the Office of Technological Commercialization at the University of Alabama in Huntsville, pointed to another potential problem for this and similar products — cost. A Pill Guard, which can hold 60 pills, costs $92 for the first one prescribed, and $65 for each one after that.

But Grant said the technology is promising, and he believes such products may someday be widely used. “ It’s one of those things people don’t know about yet,” he said.

Hayes said he’s talking with Humana about covering the product widely and believes many insurers will eventually pay for it because prevention is so much cheaper than dealing with prescription drug abuse. Hayes said insurers face costs of $1,500 for each patient who becomes addicted, and federal offi- cials say prescription drug abuse generates $70 billion in direct health care costs every year.

The idea for the Pill Guard came from a local orthopedic surgeon who lost a patient to an overdose of Percocet.

Dr. Anthony McEldowney prescribed 40 pills to the patient for a shoulder injury without knowing the man was dependent on the drug and had been doctorshopping to get what he craved. After the patient lost his job and his girlfriend, he overdosed on 20 Percocets and died.

McEldowney posited that controlling dosage mechanically could prevent such tragedies — which kill around 1,000 Kentuckians a year. Hayes joined the company to handle the business side of things, and they put together a group of engineers, who worked for about four years to develop the product, which is approved by the U.S. Food and Drug Administration.

It works this way: A patient goes to the doctor, who writes a prescription for a controlled substance such as oxycodone, noting it needs to be dispensed in a Pill Guard; he then writes a separate prescription for the device. Hayes said there are no specific criteria on when to use it; doctors make their own decisions, considering risk factors for dependence and addiction.

The pharmacist places the number of pills prescribed in the device and plugs it into a computer to program in the doctor’s instructions. At home, patients press a button to “wake up” the system, which then tells them whether they have any pills left. They enter a PIN number, and the device turns, opens and allows the patient to get a pill. Patients can also check the time until their next pill.

The device also records data on how many times someone checked the time for their next pill and how many times a wrong PIN number may have been entered — by, for example, a teenager trying to get painkillers. Doctors, or insurers, can ask to see this data.

Hayes said he believes his company provides one of the most advanced products available and will set the standard for others. “This will be the Coke or Kleenex still to come.”

The company is trying the product at a handful of area pharmacies and plans to release it much more widely starting next year. The product’s plastic parts are manufactured in California, the electronic parts in southeastern Kentucky.

The pilot devices are being paid for by insurance companies. The pharmacies purchase them from Pill Guard, and after they dispense them, they seek reimbursement from insurers.

Westmoreland said he agreed to try the product at his pharmacies in New Albany and Jeffersonville, Ind., because “I wanted to be part of the solution to the prescription drug problem.”

He said fewer than 100 patients have tried it so far, and some are unsure why they’re being asked to use it.

“There are people who don’t want to be hassled with an extra step.”

He said while he’s seen “no problems at all” with its functioning, some patients have had logistical issues. For example, he said, if a person takes a pill twice a day — before bed and in the morning — those times may not be exactly 12 hours apart. But the Pill Guard provides little leeway if, say, a patient goes to bed at 11 p.m. but wants to take the next pill with breakfast.

But he added: “On the whole, it’s the right thing to do. It’s a good concept.”

Murphy agreed, although he reiterated that cost may be an issue for some people, especially those who are uninsured or underinsured.

“If it’s costly, it’s not going to be used,” Murphy said. “ That would be an impediment to individuals.”

If it’s widely covered, or if patients get help from drug companies to pay for it, however, he predicted the Pill Guard and products like it could help in the nation’s fight against prescription drug abuse.

“Something like this is a product of the future,” Murphy said, adding that he can envision someday having pill containers that scan thumbprints. “This is very imaginative. It’s a nice beginning. And I think it’s great it’s a local company that’s put this together.”

“If something like this is done on a large scale,” he said, “it can really be part of the solution.”

Laura Unger covers the medical field for The Courier- Journal of Louisville, where this report appeared Dec. 16.