Can future UK linebacker really be that good?

Coach Ken Cribb worried what to say when college recruiters asked him about Trevin Wallace.

Cribb didn’t have anything to hide. He just worried coaches would believe Wallace was “too good to be true” if he was honest.

“If coaches could order a player off a computer checklist, he would have all you wanted. He is tall at 6-2. Weighs 225 or 230 and is yet still crazy fast. Actually unbelievably fast. He’s been timed at 22 miles per hour,” Cribb said. “He won the state weightlifting championship (his final power clean was 335 pounds). In track, he can high jump, long jump, sprint. He can do it all. In football, he can play either side of the ball.”

“Trevin is very, very special,” Cribb said. “I always told coaches I was reluctant to even say about him being a Boy Scout because he has such a high character. Usually if you say that coaches will think you mean he is a great kid but not a great athlete. But he’s well dressed, well spoken, great character.” 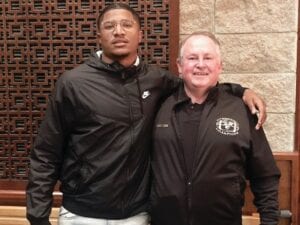 Coach Ken Cribb (right) says Trevin Wallace (left) is a special player because of his size, speed and football IQ.

Wallace played linebacker for Cribb at Wayne County (Ga.) High School and signed in December to play his college football at Kentucky.

Wallace hurt his ankle his junior year and missed most of the season, one reason he was unknown to many going into his senior season. He had just moved to defense his junior year. “He was amazing on offense, but our defense was struggling and needed help,” Cribb said.

Wallace was a star on Wayne’s freshman team but was not a “superstar.” He played on the varsity team as a sophomore and his coach started seeing “signs of brilliance” from him.

“He caught a ball before half of one game. He just went up as high as he could, got the ball and walked into the end zone,” Cribb said. “He had not gone from adolescent to adult then. He is definitely an adult right now and finally flipped that switch to greatness.”

Cribb said Wallace’s final high school game was the best game he’s seen a player have in his 33 years of coaching in South Carolina and Georgia. He was forced into duty at quarterback and ran for 384 yards against the No. 1 seed in the playoffs.

“We were down 27-25 and he scores to win the game, but the officials took about five minutes to decide he fumbled before he got into the end zone,” Cribb said. “But that game he played every snap at linebacker, returned all kickoffs and punts and played quarterback out of the night. It was incredible.”

Cribb didn’t want to take Wallace off his offense, but the coach “sacrificed” and the move paid off.

“He made an immediate impact. Our defense got really good with him,” Cribb said. “We had him at safety and he would be on the edge and shut down the whole side of the field. I still can’t tell you where his best place to play is but I think he really enjoys linebacker.

“A lot of college coaches were really impressed with how quick he adjusted to the ins and outs of playing linebacker. His IQ is really high. He’s just a great student. He reads keys and gets there because he is so fast.”

Cribb said Wallace works out daily and also still finds time to work at the local McDonald’s where his mother is the manager. His father coaches rec league football.

“He’s just a good kid, a hard worker,” Cribb said. “He’s always smiling, never complaining. He’s just a happy-go-lucky kid that everyone likes unless you have to play against him.” s

Rivals.com recruiting writer Krysten Peek thought it was “inevitable” that Devin Askew would leave after UK’s 9-16 season, so she was not surprised by his decision to transfer last week.

“It also helps seeing how well Johnny Juzang did at UCLA this past year after transferring from Kentucky and choosing a school in the Pac-12 that’s closer to home and caters to his playing style,” Peek said. “I wouldn’t be surprised if Askew ends up at a Pac-12 school next season.”

Another Rivals.com recruiting writer, David Sisk, also was not surprised that Askew is leaving.

“I wasn’t convinced a few weeks back when he (Askew’s father) said he was staying,” Sisk said. “The bottom line is that John Calipari was going to keep recruiting in the backcourt, and with the possibility of Davion Mintz returning Askew’s minutes were going to get squeezed.

“That’s the price of poker at Kentucky. The opportunity for roster upgrades is always going to be there.” s

The Smiths had inside information on the Kentucky program from All-American punter Max Duffy, who has worked summer kicking camps with Andy Smith and even coached Jackson Smith.

“Max is as honest as they come,” Andy Smith said. “What he said all along is this is just a great opportunity and the coach Stoops you see is who he is. He is genuine.”

The Smiths also have a “good relationship” with UK quality control assistant Louie Matsakis, who works with kickers/punters.

“I like how he charts things in practice and the little stuff he talks about. He is a knowledgeable guy,” Andy Smith said.

Jackson Smith is the topranked kicker in the 2022 recruiting class by ProKicker.com. He is being recruited as a kicker but is also a talented punter.

“Jackson is a heck of a punter. We did ask if they are open to him potentially doing both down the road,” Andy Smith said. “They said the best guy wins the job. It’s difficult at a high level to do all three (punt, place kick and kick off) but they said if he won the job he would get it.

“I did everything in high school and then my freshman year at Western I did kickoffs and punts. At Kentucky I was the punter and holder (for place kicks). You just never know until you get there but I know he excels at all three and will work his tail off.” s

“Growing up you work on a farm, you’re given chores to do and things have to get done,” Settle said. “I don’t know if you are familiar with working in tobacco fields, but you learn the value of hard work at an early age.

“It was backbreaking work, but you do what you have to do to get it done. That was my mindset early and it made everything else fall in place.”

It prepared him for practice in 90-degree weather with 100 percent humidity.

“My dad was a tough guy. I would not say he demanded excellence, but I had a job to get done. That’s always been my mindset,” Settle said. “He always taught me and my five siblings that how high you go and how far you go depend on work. Those are things you never forget.”

Settle, 55, comes to Kentucky from Wisconsin where he coached Jonathan Taylor, a 6,000-yard career rusher who rushed for almost 1,200 yards as a rookie with the Indianapolis Colts in 2020. He’s also coached 1,000-yard rushers James White, Derrick Ward, DeAngelo Williams and James Conner.

“I might look young, but I’m kind of old school myself. I like the physical part of football, controlling the clock, scoring points,” Settle, a former all-pro running back with the Atlanta Falcons, said explaining how his philosophy is similar to UK coach Mark Stoops’s outlook.

“Special teams play is a critical part of the game. I think if you ask anyone that watches enough football, probably the fastest way to lose a football game is to mess up on special teams. My philosophy is to be sound in all phases,” Settle said. s

“Notre Dame and a couple of other schools said in their schemes he could play any one of four offensive line positions and might look at moving him to guard,” Johnson Central assistant coach Justin Arms said.

Johnson Central has occasionally toyed with using the 300-pound Bingham on defense in goal-line situations.

“He has even long snapped a little bit for us,” Arms said. “Whatever it takes to win, that’s what he wants to do.”

Arms admitted there was a time that Notre Dame was “very hot” on Bingham’s college list because of the national TV schedule/ exposure the Irish get and his relationship with the coaches.

“But at the end of the day he just followed his heart,” Bingham said. “He is a big family guy and going to Kentucky gives his family the opportunity to see him play more. He also understands what the guys at UK are building.” s

Quote of the Week: “I am addicted to the rollercoaster of sports. I would love to stay involved in that, particularly the coaching aspect when I am done with football but I am not done yet,” UK punter Max Duffy on wanting to be a special teams coach in college eventually.

Quote of the Week 2: “Everybody wants to play quarterback when they first start playing until they get hit in the teeth and have to stand in there,” UK offensive coordinator Liam Coen on what quality quarterbacks must have.