Can healthy Reds put it all together? 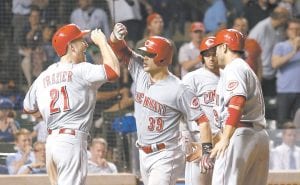 HERE COME THE REDS Cincinnati Reds catcher Devin Mesoraco (39) celebrated his grand slam off Chicago Cubs relief pitcher Hector Rondon with Todd Frazier (21), Joey Votto, right, and Billy Hamilton during the ninth inning of a Reds win in Chicago earlier this week. All four players, each of whom has played a major role during Cincinnati’s recent resurgence, scored on the play. Monday’s win put the Reds over the .500 won-loss mark for the first time this season. (AP Photo)

The question that begs to be asked as the Cincinnati Reds head to the West Coast for their last and longest road trip before the All- Star break is this: Are the Reds now healthy enough to keep the season heading in the right direction?

It’s definitely not too late. Going into Tuesday night’s game at Wrigley Field in Chicago, Cincinnati had a winning record, 38-37, for the first time in the 2014 season. Although it is late June and the remaining seven games on the road trip, four of them are against the hapless Cubs and San Diego Padres. There is light at the end of the tunnel, especially if the Reds can end this road trip with at least six wins.

Only time will tell if the Reds are truly out of their 10-week injury-ridden mess, but they have been winning series against teams that are playing above .500, with two of those teams (Milwaukee and Toronto) leading their respective divisions. Had the Reds middle relievers and closer not had a complete meltdown against Toronto last Friday night they would have been winners of eight of their last 10 games.

The second question that needs to be asked is this: What has brought about this encouraging turnaround of late?

I can’t put my finger on it completely, but some of the recent success has to be the result of Joey Votto and Jay Bruce getting back onto the field and giving a few quality at-bats. Matt Latos, the team’s No. 2 starter, is also off the disabled list. Latos gave the Reds one quality start and had a 9-4 lead before leaving the game in the sixth inning of his second start.

Still, the two big surprises so far in the first half — and possibly the reasons why the Reds have been able to keep their heads above water — is the offensive output from third-baseman Todd Frazier and the catching duo of Devin Mesoraco and Brayan Pena. Frazier entered Tuesday’s play with a batting average of .284, 23rd-best in the National League, and 17 homeruns (third best in the NL. Mesoraco and Pena are averaging .315 and .252, respectively. Mesoraco has 13 homeruns even though he has been on the disabled list twice.

In order for this team to qualify for the playoffs, which was the stated goal when the season began, it must get solid offensive production from Joey Votto and Jay Bruce in the second half. And I’m talking numbers they’ve both put up in past years, not the .269 Votto was hitting Tuesday nor the .224 clip Bruce was batting.

When the Reds return home to Great American Ball Park after this road trip they will end the first half of the season with an 11-game home stand that includes a day/ night doubleheader with the Cubs on Tuesday, July 8.

As a matter of fact, the schedule for the entire month of July calls for the Reds to play 17 home games and only eight games away sandwiched around the Major League Baseball All Star Game break. This portion of the schedule should help in the comeback that will hopefully place them back into playoff contention.

Several special weekend dates should encourage Reds fans across the Commonwealth to make the trip up I-75 to the Queen City. All Friday home dates are highlighted with a 30-minute fireworks show featuring a popular music theme playing in the background on the stadium public address system. Also, the Reds will offer three special Saturday giveaways to the first 20,000 fans that go through the turnstiles. The giveaways start July 5 when a special militarythemed Joey Votto T-shirt is given away. On the next Saturday (July 12) the Reds will give away a Billy Hamilton bobble-head. On the last Saturday in July the Reds will give away a Mr. Redlegs mustache and hat.

Visit www.reds.com to buy tickets or get more information. Fans also may call (513)381-REDS. Every section on every level in Great American Ball Park has a row of handicap/senior citizen seats. If you are interested in those seats, you may call (513)765-7500.