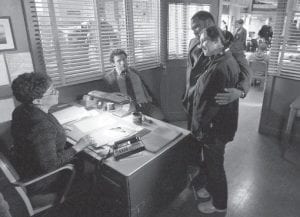 The outburst comes from Anthony Anderson, who is describing the essential qualities of Kevin Bernard, the latest detective to join NBC-TV’s long-running “Law & Order.” The funloving and funny Anderson debuted last season as Bernard and resumes busting bad guys tonight (Wednesday, Nov. 5) at 10 p.m., with the season opener.

If Anderson has an off-camera “off switch,” it’s nowhere to be found this day as he shoots scenes inside Silver Screen Studios at Chelsea Piers, which houses the crime drama’s precinct, district attorney’s office, courthouse, prison and morgue. He bellows throughout the day, at one point jokingly scolding a crew member, “GET OFF THE TELEPHONE, WOMAN!”

Anderson, 38, follows Sisto, 34, and Linus Roache, 44, as the third in a swift succession of young actors — well, young by “Law & Order” standards — recruited by Wolf for the 18th season, which concluded in May. The venerable series is a recent victim of near-cancellation, and fresh blood could be just the bait needed to lure the younger viewers that advertisers love and keep the show going for another two decades.

“Law & Order” is returning to the air earlier than the announced date of early 2009, the result of an NBC schedule reshuffling to shore up the network’s ratings as sweeps month begins. After almost two decades, this durable old veteran still has the juice to help rescue NBC’s prime-time.

But it remains to be seen whether the cast reshuffling will achieve Wolf’s greatest ambition: to surpass “Gunsmoke” as the longest-running prime-time drama in the history of television.

But the TV mogul, who oversees the spinoffs “Law & Order: SVU” and “Law & Order: Criminal Intent,” nearly lost his chance for the record when NBC threatened to cancel after a sharp ratings drop last season.

Any plug-pulling seems preposterous, given the series’ enduring status as the mother ship of one of the strongest franchises on TV. Wolf struck a last-minute deal to save the show in May 2007 by trading “Criminal Intent” to the NBC-owned USA Network in exchange for another year of “Law & Order” on the Peacock Network.

As it happens, the original series fared well in its 18th season: It debuted in January amid the writers strike with fresh episodes, and averaged a total 10.7 million viewers. That’s a major jump, up 19 percent from the previous season (9 million average viewers), according to NBC ratings expert Tom Bierbaum.

It’s also a positive sign for a show that peaked in its 2001-02 season with an average viewership of 18.7 million, and has steadily decreased in the ratings as TV began losing viewers to the Internet and other digital phenomena.

Waterston attributed the audience bump to the show’s move to Wednesday from Friday, one of the least-watched nights on TV, and to Wolf’s talents at keeping it fresh without tinkering too visibly with a tried-and-true format.

Dipping into the fountain of youthful actors could help Wolf achieve his goal.

If “Law & Order” has a weakness, it’s that its core audience — boomers who value a good whodunit — skews outside the target 18-49 demographic coveted by advertisers, said TV historian Tim Brooks, who compared the show to non-glitzy, well-written mysteries such as “Matlock” and “Murder, She Wrote” — and “a comfortable old shoe.”

That’s not a bad thing, though. It provides stability for NBC, which continues to struggle in the ratings, and has also grown a following in syndication on cable; on any given night, viewers can find “Law & Order” on TNT, and “SVU” and “Criminal Intent” on the USA and Bravo networks.

“Law & Order” pioneered the concept of the TV franchise by extending the brand to “SVU,” “Criminal Intent” and the shortlived “Trial by Jury.” It inspired copycats including CBS’ “CSI: Crime Scene Investigation.”

Wolf said the reason “Law & Order” has remained on the air so long rests with its self-contained, plot-driven formula.

“You don’t have to see it for a week, a month, a year,” he said. “You come back into a totally complete hour of television with a beginning, middle and an end, and hopefully, a satisfying conclusion. And you can go on your merry way and, if you catch it two years later, it can be a completely different cast. But it still works as exactly the same.”

Despite cast turnover, “Law & Order” has retained its tradition of using real-life headlines and twisting them into dramatic plot lines. Wednesday’s show delivers a thriller of messy elegance as the detectives and attorneys clash over McCoy’s bold move to classify a bloody street fight as a terrorist attack; in this case, the viewer is treated as a jury member, forced to decide between two convincing arguments.

The first victim: A stockbroker beaten to death in broad daylight. “In this economy, this is the kind of thing that might catch on,” quips Bernard upon inspecting the body.

The final word on cast changes rests with Wolf, who reserves the power to hire — and veto — the actors and actresses working full-time in the 27th Precinct and the DA’s office.

But he couldn’t control the nine-year itch of Martin, who decided to depart his popular role in the middle of last season because he “was just feeling really burned out,” Wolf said.

Wolf likened Anderson to the late Jerry Orbach, who delivered one-liners with a wink as Detective Lennie Briscoe from 1991- 2004.

“He has the ability in terms of his wry observations to bring the same type of rhythm to certain scenes that Jerry did,” he said. “And not to compare them as actors, but it’s great to have somebody who has mastered the art of comic timing.”

But while Orbach’s Briscoe was warm and comforting, Anderson’s Bernard can be cool and combative.

“There’s something innately likable about him and, at the same time, innately tough and innately ‘cop,”‘ said executive producer Fred Berner. “And that combination is kind of fun to watch and dangerous all at the same time. As a human being and an actor, he’s a total joy. And as a character, he’s beginning to find his sea legs.”

His chemistry with the understated Sisto is a plus.

“The secret of partners is always to have ideally one be the yang to somebody else’s yin, and I think that they are really very complementary to each other,” Wolf said.

Plasma computer screens sit atop desks cluttered with papers, folders, coffee cups and tired old books. A series of hallways leads from the den of offices to a courtroom scattered with wooden witness boxes that the crew will clear for later scenes. Even more passageways lead to the morgue, which contains the requisite storage spaces for dead bodies. The Rikers Island jail is recreated, complete with an admissions office and steely gates through which inmates pass to enter the slammer.

The true star of the set, though, is the squad room, a virtual museum of “Law & Order” nostalgia. Though some NYPD precincts updated their look following the Sept. 11 attacks, Wolf left it alone “because it actually is so emblematic of the show,” Berner said.

Computers displaying screen grabs of Web sites and fingerprint scans are flourishes of the new, yet the old-school grit continues: a retro typewriter; peeling green paint; the worn look of a sign that reads, “N.Y.C. Detectives: the greatest detectives in the WORLD.”

Here, like so many before them, detectives Bernard and Lupo crack cases.

“Ted Sanderson — he did nine years for killing his wife until DNA evidence cleared him last year,” Bernard informs Van Buren as cameras roll for the third take of a one-minute scene in her office. Bernard thinks Sanderson murdered his wife’s ex; Lupo is not so sure.

Van Buren directs the duo to “take a closer look.”

They file out, and that’s a wrap.

Anderson becomes himself again, laughing boisterously at a personal joke between him and Sisto.

The race to outlive “Gunsmoke” was never so much fun.