Can Letcher Co. be toured by river? 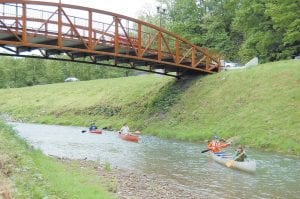 Shown above are four of 10 people who traveled on the North Fork of the Kentucky River from Whitesburg to Judy Branch at Roxana by canoes and kayaks on May 11. Tarence Ray, an AmeriCorps VISTA volunteer with Headwaters, Inc., said the 16-mile trip was an experiment to survey the route to help determine whether to pursue developing a river trail in Letcher County. This photograph was taken in Whitesburg near the pedestrian bridge. Pictured from left are Roy Crawford, Jerry Collins, Evan Smith and Jessica Branham. (Photo by Sally Barto)

There’s more than one way to tour Letcher County. Trails either exist or are in the process of being developed for all-terrain vehicle enthusiasts, hikers, bikers and horseback riders. But, what about a river trail?

Headwaters Inc., which is Letcher County’s Watershed Organization, is contemplating the idea of developing a river trail through the county.

Tarence Ray, an AmeriCorps VISTA volunteer with Headwaters Inc., organized a canoe run on May 11 to find sites to put in and take out canoes and kayaks as well as locate problematic sections of the river and assess the size of the litter problem.

Ten people spent about six hours floating down the North Fork of the Kentucky River on Saturday.

“It’s an excellent river,” said Jerry Collins, who used to travel by canoe on the North Fork every Christmas day. “It’s probably one of the perfect flat water rivers. It’s continuously flowing which makes it easy. No rapids, so it’s not dangerous.” 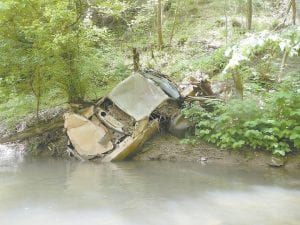 Tarence Ray, an AmeriCorps VISTA volunteer with Headwaters Inc., took this photograph on May 11 of a car embedded on the bankof the North Fork of the Kentucky River.

Most of the group on Saturday morning put their canoes and kayaks in the river near the water intake at the Whitesburg Water Plant near River Park. After traveling about 16 miles, the group pulled their boats out of the river at Judy Branch in Roxana.

“We were kind of surveying to see what we would be up against,” said Ray. “There were some really pretty places and some really bad places.”

The group saw blue herons and wild magnolias. Fishermen were spotted near Premium.

If a river trail is developed in the county, he said a great deal of money would be spent on cleaning up the river.

“That’s probably the biggest obstacle at this point,” said Ray. “A lot of the stuff there is probably 20 years old and has been in there a long time.”

Ray said most of the trash in the river has been there before the fiscal court implemented a countywide trash pickup program.

“Countywide trash pickup has done a lot to improve it,” he said.

Collins, of Millstone, said he has been paddling in a canoe in the North Fork on the Kentucky River since 1973. Collins, who hadn’t been down the river in a canoe in about five years, was pleased with how the river looked on Saturday.

“ It’s the best it has ever looked,” said Collins, who has canoed more than 12,000 miles in his lifetime. “There was no garbage in Whitesburg and that has really impressed me.”

He said there isn’t as much trash along the river as there has been in previous years.

“You are going to see garbage in any river,” said Collins.

Fallen trees and large piles of brush became an obstacle course for the group to navigate around.

The stream was shallow at a few points and Ray and his canoeing partner, Regina Donour, got out of the canoe and pulled it through to deeper water.

“It is really shallow in some areas,” said Ray. “There would be a need to dredge out the stream.”

He said this would be an intensive and expensive process.

The closer the group got to Roxana, the faster the currents became.

Ray said if a river trail is going to be developed, people need to be environmental stewards and not litter.

“It’s going to take a countywide effort,” he said.

Ray said Headwaters, Inc., will pull resources together and see where the nonprofit organization is as far as funding for a project such as this goes.

From a tourism aspect, a river trial could become a business venture for someone who decided to rent out canoes and shuttle people back into town, Ray said.

“That’s the economic development aspect of it,” he said. “Ultimately, the goal is tourism.”

Ray said he may organize another canoe run soon.

He said if people decide to travel the North Fork of the Kentucky River, he advises that they go with an experienced guide like Collins.

“With an experienced guide like that, it could be a lot of fun,” said Ray. “He’s very knowledgeable.

Definitely go with someone who is experienced and knows the area and history of the area.”