Can our legendary caves be made tourist-friendly? 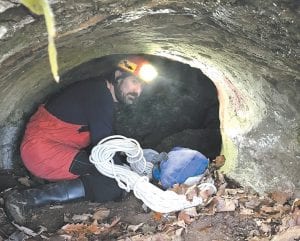 With a rope cast into total darkness, Tommy Compton squirms through a hole barely as big as a bathroom sink and disappears into a void in the limestone on Pine Mountain near Whitesburg.

He is the first human ever to enter the cave.

Compton, a funeral director in Pike County, is an avid caver, and has explored most of the known caves on Pine Mountain in Letcher County. He said he and his fellow club members at Pine Mountain Grotto had to widen the entrance of this particular cave for a person to fit through it.

Compton was driving the van the funeral home uses to pick up dead bodies the first time the landowner told him about the cave. He said the man told him if he crawled into that cave, they’d have to haul him away in the back of the van.

“I named that one the Toe Tag Pit,” Compton said.

He and his friends used a technique called macro shaving to fracture small pieces off the rock around the entrance. When they were done, there was just enough room for a man to squeeze through.

People have known about the Pine Mountain caves since pioneer times, when settlers mined saltpeter from some of them to make gunpowder. The Mountain Eagle has written about them at least as far back as 1926.

While the caves are relatively small, their legend has grown over the years so that many people now believe them to be bigger than Mammoth Cave, the longest known cave system in the world. Angel Cave in particular, near Scuttle Hole Gap, was touted in 1971 as one of the biggest and most spectacular caves ever discovered, and many have speculated since that it could become a tourist attraction for the county.

Compton agreed that it’s spectacular, but said it takes a halfhour to traverse its entire length of about 300 feet, once you descend 120 feet by rope to the cave floor. Cavers have to crawl on their bellies through the horizontal passageways.

The Mammoth Cave system is 400 miles long with soaring domes and passageways tall enough to walk through. Stairs have replaced ropes there as a way of descending into the depths.

Photos of the cave show huge rock formations that some say look like angel wings. But while one previous explorer described rainbow colors in the cave, Compton said that’s an exaggeration. The cave is the same color as any other.

Gary Jessey of Jenkins wrote a book about the caves in 1975 and debunked many of the myths. He said he was very excited when the first description of Angel Cave was published, but after reading further, he realized it was a cave he had already been in and it was nothing like the description.

He said the cave is beautiful and there are parts that he believes are still unexplored. He said there is a spot across from the ledge Compton described that looks as though there are more passages, but you can’t get to it because of the chasm between the two sides of the cave.

Jessey published detailed, and Compton says very accurate, maps of the caves he visited here. One particular cave that may be a disappointment to longtime residents is the infamous Bull Hole, where Letcher County politicians are said to go after election defeats. While legend has it that the Bull Hole is a bottomless pit too deep to be explored even on the longest rope, it’s actually about 45 feet deep — far from bottomless, and not even close to being the deepest pit in the county.

And while there have been calls for years to commercialize the caves and open them to tourists, Jessey said most of the caves are too difficult to travel through for anyone other than adventurers.

“About the only one you could develop, and you’d have to drill in and make an entrance, is Linefork Cave,” Jessey said.

Someone tried to get agreements from the family that owns Angel Cave a few years ago to develop it into a tourist attraction, Jessey said, but was unable to get all of the heirs to agree to it. Even if the agreement were reached, it would require carving a new entrance to the cave so visitors could walk in.

Like the Bull Hole, most of the caves in Letcher County are vertical, requiring cavers — don’t ever call them spelunkers — to descend by ropes into the pits. Once at the bottom, they remove the ropes and explore. There are sometimes small passages off to the sides and a couple of caves have spectacular rock formations, but most are nothing more than sinkholes.

Raven Rock Pit is big enough for a small car to fit in the opening. There are no side passages to a Mammoth-sized cave system, but Compton still says the pit is “everything I heard it was and more.” There are no ledges for a caver to rest on, and the cave drops 170 feet straight down.

“It’s quite possibly one of the longest free falls on Pine Mountain,” he said.

Payne Gap Cavern, just a mile or so down the mountain, has several passages, but they’re not very long, and each set of rooms and passages has to be reached by rope dropped through crevices that look impossibly small. There are several videos of that cave on YouTube.

Linefork Cave is different, Jessey said. The cave is at least six miles long, and many of the passages are tall enough to walk through, and wide enough that explorers don’t have to squeeze.

“It’s kind of claustrophobic to get into, but once you’re in there you could throw a football,” he said.

There are parts of the cave where cavers have to wade through chest-deep water, and at the end, the only way to continue is by diving, something Jessey said he’s never tried.

The problem with that cave is that it’s home to the endangered Indiana bat, and is on property that belongs to Kingdom Come State Park. Officials have gated it to prevent people from disturbing the bats, which can die if they awaken from hibernation early.