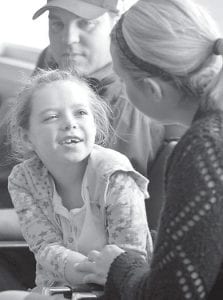 Dr. Paul Dougherty delicately slipped a tiny lens inside the right eye of 7-year-old Megan Garvin — a last-ditch shot at saving her sight in that eye.

The California girl recently became one of a small number of U.S. children to try an experimental surgery to prevent virtual blindness from lazy eye diagnosed too late, or too severe, for standard treatment.

The new approach: Implantable lenses, the same kind that nearsighted adults can have inserted for crisper vision — but that aren’t officially approved for use in children.

“Without this technology, we couldn’t help her,” says Dougherty, a prominent Los Angeles eye surgeon who invited The Associated Press to document Megan’s surgery. “This would be written off as a blind eye.”

Up to 5 percent of children have amblyopia, commonly called lazy eye, where one eye is so much stronger than the other that the brain learns to ignore the weaker eye. Untreated, the proper neural connections for vision don’t form, eventually rendering that eye useless.

Catch it early — preferably by preschool — and it can be fairly easy to fix by patching over the strong eye, or using special drops in it, for several hours a day so that the brain is forced to use the weak eye. But the older the child is, the less effective the treatment — and by age 9, brain-eye connections are pretty well set.

The leading cause is eyes that aren’t in perfect alignment. But a big difference in focusing power also triggers amblyopia. That’s what happened with the Garvin girl, who had near-perfect vision in one eye but the other was too nearsighted to even see the big E on the eye chart.

It’s sneaky: Kids don’t realize they’re seeing clearly out of only one eye, and often won’t squint or otherwise signal there’s a problem. So Megan was fast passing the window to correct amblyopia when a kindergarten eye exam flagged a problem.

“She reads perfectly, she’s a very normal active child,” says her mother, Rosie Garvin. “If she would not have had that vision test, I would never have known.”

Ophthalmologists called it one of the worst cases they’d ever seen. Glasses weren’t doable: One side would have required a clear lens and the other a Coke-bottle thickness, a prescription of minus 12 diopters. Her parents tried inserting a contact lens in the bad eye — getting her to roughly 20-60 vision in that eye, far from perfect but able to see blurrily while the good eye was patched.

Contacts and young kids are a tough match. Megan cried when her mother inserted it. Teachers would call to say it had popped out.

Frustrated, the Garvins ultimately opted for the implant — and days later, are feeling hopeful. It’s blurry, Megan tells her mother, but she can see out of her right eye, and is chafing at the required week of rest to let the tiny incisions in her eye heal.

That’s just the first step. Months of patching lie ahead to try to reverse the lazy eye, or the brain would just stick with the connections it has already formed to her strong eye. Dougherty gave no guarantees.

“I know we’ve got our work ahead of us,” says Garvin’s mother, from Simi Valley, Calif. “I’m so relieved … and going to make sure I do everything they tell me to make sure this works for her for life.”

Implantable lenses for adults, called phakic intraocular lenses or IOLs, hit the U.S. market in 2004. Unlike cataract surgery that requires removal of the eye’s natural lens because it is clouded, these lenses are put on top of a natural lens that can’t focus properly, thus helping sharpen vision.

They have some risks: Surgical infection, inflammation, a potential for cataracts to form. At about $4,000 an eye, it’s more expensive than the controversial laser eye surgery LASIK, but the lenses can be removed if there are problems.

But, “how this lens is going to work in a child’s eye, we don’t know. We’ve never done studies,” cautions Dr. Punin Shah, a cornea specialist at Ochsner Medical Center in New Orleans.

It is legal to implant the lenses experimentally in a child, however. A handful of medical jour- nal reports show surgeons are starting to try the approach for hard-to-treat amblyopia. In a French study of a dozen children, all had improved vision after the surgery and half recovered normal binocular vision.

Other surgeons are experimenting with LASIK in children like Megan, although she wasn’t a LASIK candidate — her corneas were too thin for it to be done safely, and Dougherty says it doesn’t work well for such severe nearsightedness.

Dr. Michael Repka, a pediatric ophthalmologist at Baltimore’s Johns Hopkins University, says both approaches are in their infancy, but interesting.

“It’s an exciting thing in a patient who has had conventional therapy and failed,” says Repka, a spokesman for the American Academy of Ophthalmology.

And while catching lazy eye very young is best, stay tuned: Repka’s own research shows it can be possible to treat after age 9, long the cut-off, and he is to publish details soon.