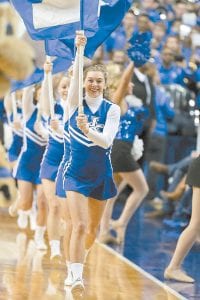 Former UK cheerleader Emily Sawyer not only has made the Team USA cheer squad, but she’ll be back cheering in Rupp Arena Saturday because the UK cheerleaders are at the Olympics. (UK Athletics)

Could it happen this year? Going into the Auburn game, Kentucky was 6-6 in SEC play with six games left after once being 6-3 before losses to Missouri, Tennessee and Texas A&M. Calipari has never lost more than six SEC games in his previous eight years at UK.

Alabama comes into Rupp Arena Saturday and has some big-time wins. It crushed Florida 68-50 in Gainesville. It beat Oklahoma 80-73 and had a 13-point lead at one time in the game. Last Saturday it destroyed Tennessee 78-50 after the Vols won at UK in their previous game for a sixth straight SEC win. Tennessee had not allowed more than 63 points to any team in its six-game win streak

“I think there’s an assumption that we practice different or something before we play a top- 25 team or we don’t practice the same way,” Alabama coach Avery Johnson said.

Alabama also has wins over Texas A&M and Auburn.

Calipari just hopes his team can regroup before postseason play next month.

“We play for March. That’s what we’re playing for. We’ve got to get this thing right,” the Kentucky coach said after the Texas A&M loss. “We’ve still got time. Been in this situation a couple different times at Kentucky and you now every team we play is giving us their best shot. When we get this, we’ll bust through, but it’s getting old right now.

“And it’s getting, each week that goes by, it gets harder and harder to get this thing to where you want it to go.”

Kentucky was projected as a No. 7 seed in the NCAA Tournament going into this week.

If you are a University of Kentucky sports fan, it’s likely you’ve watched Alan Cutler plenty of times on WLEX-TV (Channel 18 in Lexington). He’s been part of the Lexington TV market for 33 plus years dating back to 1981.

Recently the WLEX-TV sports personality announced he would retire after helping the station again cover the Kentucky Derby — an event he truly loves.

Many of you will remember him for UK basketball and football stories. But don’t forget that Cutler, a New York native, had a big impact on the Lexington TV market when he arrived in 1981 (he left briefly in 1984 to work in Pittsburgh before returning for good in 1987).

“I think Cut did a lot to change sports coverage in Lexington. With all due respect to some of the other fine reporters working in TV, he just brought a different energy level and passion to his segments,” Jeff Drummond, Cats Illustrated managing editor, said. “It was a bit of New York swagger that we probably needed here.

“And that big personality led to some great, candid responses from athletes during press conferences. I’ll miss his ability to get players to open up and not give cliché responses. It helped all of us do our job better at times.”

“I always liked the way he covered the Cats with personality but he never let the personality overshadow the story. That’s not easy to do,” Glover said.

It didn’t take long when Cutler arrived for his impact to be felt. Tom Leach, play-by-play voice for UK football and basketball, remembers the aggressive, provocative style Cutler brought with him. He had his own swagger — but it worked for him.

“Anytime you shake up the status quo, it impacts the landscape of that particular business or group. Often that pushing of the envelope is a good thing and such was the case with Alan in the Lexington sports market,” Leach said. “One thing you could always respect was his work ethic and his passion for the job and any young sports broadcaster would do well to adopt those qualities in his or her work. Alan’s been a class act and I’ll miss seeing him around the media rooms.”

Mary Jo Ford was on the sports staff at WLEX with Cutler and Ryan Lemond. She said viewers now reap the benefits of a major change Cutler brought to Lexington.

“We are all so used to tuning in Friday nights to see high school football and basketball. None of that was around before Cutler. He changed how high school sports are covered,” Ford said. “Cutler came to central Kentucky and brought his New York mindset and it wasn’t just covering the game — it was asking tough questions and digging to uncover stories. You cannot talk about sports in Lexington without mentioning him.”

“It was a smile — if you could see it through the mustache. It was the way he talked and it was the way he pressed questions in the tough situations,” Farmer said. “He also tells me he started the first high school show around here and now every station in the state does it.”

Ryan Lemond was part of the “World Famous Prep Report” that Cutler started at WLEX that brought game highlights from central Kentucky to viewers that they had previously not been able to see.

“Lexington sports media will never be the same. Whether you liked him or not, you always tuned in to see what Cutler had to say,” Lemond said. “His greatest legacy in this market will be his invention of the prep report where for the first time local TV sports coverage expanded outside Lexington. Cutler started that. Every local community tuned in every Friday night because he did that.”

Former Kentucky defensive lineman Jacob Hyde of Clay County is finishing his Master’s degree this semester and will then head “wherever the Good Lord takes me” to use his social work expertise. He’s leaving UK with absolutely no regrets, too, despite never playing as much as he hoped.

He knows how many others from Clay County — or anywhere in eastern Kentucky — would have been thrilled to have spent five years on the UK football team and leaving UK with both undergraduate and graduate degrees.

“Playing football, going to school, doing an internship … it was hard. But I loved it all,” Hyde said. “Not many people where I am from — or in that whole region — get a degree in general. I was one of the fortunate ones to get all of mine paid for. I leave college with not one degree, but two, and I am healthy. And I got two bowl rings. Why would I not be happy?”

Hyde’s weight reached 320 pounds at UK, a routine number for a SEC defensive lineman. Now he’s trying to shed about 50 pounds before graduation in May, so he’s spending a lot of time at the UK football facility doing cardio work.

“I see those guys (returning players) working and I believe in what they are doing. It kills me to watch them work and me not be in there with them,” Hyde said. “You play this game for 14, 15 years and all of a sudden you wake up and you are done, it is a rough thing.”

Former Kentucky cheerleader Emily Sawyer is now a registered nurse working in the labor and delivery department at the UK Medical Center. She was part of national championship teams at UK and couldn’t be prouder that this year’s squad is now in South Korea representing the United States at the Winter Olympics.

However, Saturday she’ll be back at Rupp Arena cheering for the Cats. She’s one of the alumni cheerleaders that UK cheer coach Jomo Thompson asked to come back to help with so many cheerleaders gone to South Korea.

“I’m really excited,” Sawyer said. “I have my dream job right now. I couldn’t be happier. What I am doing is my passion and I am lucky I got the job right out of college. It’s very rewarding. But I also kept up my training and train with the UK (cheerleaders).”

That training helped her get picked again to be part of the USA cheer team that will compete against international teams in Orlando in October. It’s the third time for the former West Jessamine High School graduate has made this team.

“You have cheerleaders all over the country try out. We train locally and then get together in April and train for 12 days to get ready for the competition,” Sawyer said.

Sawyer is on the coed team and again will be one of the “flyers” that soar so high into the air that she admits it can be “horrifying no matter your skill level or years of experience.”

Quote of the Week: She’s a baller from the holler,”

Quote of the Week 2: “We never felt like we were being snubbed because we had finished 11th last year. Who do you think we should have been picked ahead of? We might have felt we were better, but we also knew we had to prove it,” Auburn coach Bruce Pearl on his team’s surprising resurgence this season.