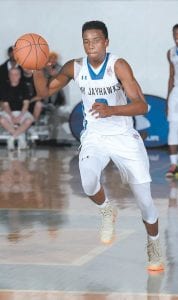 Hamidou Diallo is considered the nation’s top shooting guard in the 2017 recruiting class and has drawn a lot of interest from John Calipari in recent weeks. (Photo by Kelly Kline/Under Armour)

Kentucky basketball coach John Calipari has been busy handing out scholarship offers to players in the 2017 and 2018 recruiting classes the last two weeks.

One intriguing prospect is Putnam Science Academy (Conn.) guard Hamidou Diallo. He has a bevy of scholarship offers, including Connecticut and Duke.

Diallo plays AAU summer basketball for the New York Rens, based in his hometown of Queens, N.Y., in the Nike Youth Basketball League.

Marc Allard, sports editor of the Norwich Bulletin, says the 6-4 Diallo has the ability to penetrate defenses but also to hit from three-point range. He led his team with 32 three-pointers last season and averaged 16 points per game.

“But he is not selfish. He can score 30 plus points per game (against good competition from the New England Prep School Athletic Council and other top prep programs), but is also willing and able to distribute. I think the top programs also really liked his play on the defensive end. He has good size and good quickness,” Allard said.

The recent scholarship offers to Diallo from big-name schools did not surprise Allard. He says Syracuse has been following Diallo the longest and would like to keep Diallo close to home, one reason he thought Syracuse might have the inside track.

“He has had offers, as you may expect, from many of the better programs. It seems — just like when a McDonald’s is built, a Burger King isn’t too far behind — when one comes knocking, they all do,” Allard said. “However, Calipari has seen Diallo in person about five times from what I’ve been told so I think the Wildcats are serious.

“I know UConn has also been very much in the hunt, but Diallo is giving no indication as to where he is leaning now. He told me that ‘there are no favorites,’ and will begin doing some official visits after the summer season. “

The sports editor says Diallo “is not the most talkative player I’ve ever met,” but also said he is very mature and handles his talking points well. He says Diallo’s high school coach, Tom Espinosa, has also told him the player is surrounded by some “good, strong influences” that should help prepare him for college basketball.

“He also plays against NEPSAC teams (some of the best prep basketball in the country) and for the New York Rens in AAU ball, so he is familiar with playing against strong competition,” Allard said. “One thing he may have to get used to is playing in front of larger crowds. I’m not sure how the AAU crowds are in New York, but the prep schools generally play in smaller gyms and in front of smaller crowds in New England. “

Allard says Diallo sometimes needs to work on his maturity on the court because of his intensity.

“It’s one of the aspects that Espinosa thinks he might need a little work on as he moves up. He can get a little too much into the game and what is happening on the floor, needs to stay on course a bit more,” Allard said.

“Tubby Smith will do a great job at Memphis. He’s a terrific fit there, and will win and win big. That’s a home run get for Memphis,” ESPN analyst Jay Bilas said.

“And for Tubby, it is a fantastic move due to the rich basketball tradition of Memphis. He’s also in a conference he has a great chance to dominate,” ESPN analyst Dick Vitale said.

This would seem a good time for UK to consider playing Memphis and perhaps putting Smith’s jersey in the Rupp Arena rafters. He’s already in the UK Athletics Hall of Fame but he deserves a jersey hung in his honor for winning a national title at UK.

“It would be wonderful for Kentucky to put Tubby in the rafters, and he’s very deserving, in my judgment. Tubby Smith has won everywhere he’s been, from Tulsa to Georgia to Kentucky to Minnesota to Texas Tech, and he’ll win at Memphis. There’s not a finer gentleman in sports than Tubby Smith,” Bilas said.

“It’s obvious from my interactions on Twitter that the people at Kentucky have come to appreciate what Tubby did well there. He is genuinely a terrific coach,” De- Courcy said. “I wouldn’t pretend his tenure at Kentucky was perfect, but it was overall a success.”

‘Legend’ In the Making

One of my favorite things to watch at Kentucky football the past few years has been the interaction between UK defensive line coach Jimmy Brumbaugh and his son, Legend. I had the chance to get to know Legend a bit off the field as well as watch him play quarterback at Lexington Catholic.

Legend won’t be around UK much this next season, though, because he will be playing at Trinity Christian in Jacksonville, Fla., because of family reasons. Trinity Christian has won three straight state titles and coach Brumbaugh says it has a lot of quality players who could play college football.

“My wife’s mom is not doing well, so my wife is down there. It is what it is. We always talk on the phone. That is my guy. We will be fine, but I do miss him,” Jimmy Brumbaugh said. “He is back to close to my hometown. My family is around him and my wife can help her mom.”

Legend has several Division I scholarship offers of his own already and likely will have more by the time his season starts. That’s helped his father rationalize not having him around as much.

“After next year, he is going to be on the road any way. He will be playing (college football) somewhere,” Jimmy Brumbaugh said.

Kentucky football commit Landon Young of Lexington Lafayette admits it was a bit overwhelming to share the Wallace “Wah Wah” Jones award with Owensboro Catholic’s Ray Zuberer because of Jones’s tremendous feats. Jones set a national scoring record in basketball while leading Harlan to the state title. At Kentucky, Jones played football under Bear Bryant, basketball under Adolph Rupp and baseball. He helped UK win two NCAA championships in 1948 and 1949 and was on the 1948 Olympic gold medal team. He was also all- American in football and is the only UK athlete with his number retired in both football and basketball.

“I have to admit I feel sort of like a slacker hearing all the things he accomplished during his career,” said the Lafayette High School senior.

Slacker is really not a word to use about the 6-7, 310-pound offensive lineman who helped Lafayette reach the state semifinals and is a rare five-star recruit, especially in Kentucky. However, what makes him even more intriguing to football schools — he also had scholarship offers from Alabama, Ohio State and Auburn among others — is that he has never just solely concentrated on football and he’s glad he didn’t. He was a state wrestling champion and also has won state titles in the shot put and discus.

“When coaches make student athletes just focus on one sport, that is worst decision a coach can make. They want to own them and just have them do that one thing year round. It burns kids out,” Young said. “That was the big thing for me. I didn’t want to do football year round for four years.

One of the most impressive players to me in UK’s Blue-White Game that ended spring practice was sophomore running back Sihiem King. He showed both his speed and elusiveness and also how he could take a hit and still fall forward.

“What I really like about him is he’s really got good vision,” UK head coach Mark Stoops said. “We know he has some ability in the open field when he gets some space. But I thought his vision on inside runs was really good to see. So, again, I just see growth. He’s a nice complement to some of the other backs.”

One other plus from King doing so well is that Boom Williams got to see that if he lacks focus next season like he certainly did at times last year, Stoops has a capable replacement. King’s play in the spring should be great motivation for Williams to stay in a team-first mode.

It should also help quarterback Drew Barker’s confidence to see the way tight end C.J. Conrad performed. Stoops liked that he made the routine plays look routine. I liked that he went up in traffic in the end zone to catch the ball, take a hit and still score. That’s been missing from the UK offense for years now.

There should be no doubt about who is Kentucky’s top football recruit in 2017 — Florida quarterback Mac Jones. He was named MVP of the Rivals Quarterback Challenge finals in Baltimore while competing against some of the nation’s top players.

He’s already regarded as a four-star prospect but his play this spring in various camps could soon have him elevated to five-star status. And give former UK offensive coordinator Shannon Dawson credit here. He was the one who noted Jones’s potential when he was still on the West Virginia staff, made a connection with him and used that to get him to commit to UK last year.

Jones got a scholarship offer from Alabama about two weeks ago. However, UK freshman lineman Drake Jackson of Woodford County told me recently that he believes Jones will remain true blue.