Can Wildcats get elusive sixth win? 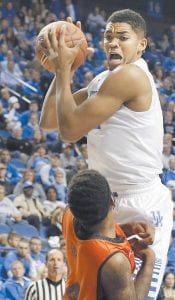 BIG MAN ON CAMPUS — Kentucky’s Karl-Anthony Towns, top, pulled down a rebound over Pikeville’s KK Simmons during the second half of an exhibition Sunday in Lexington. Kentucky won 116-68. (AP Photo/James Crisp)

For all those folks across the Commonwealth who thought Mark Stoops and his Wildcat football team were set to win their sixth game of the season and become bowl eligible at Columbia, Missouri, well, evidently you hadn’t seen the Tigers play. Missouri was clearly a better football team than UK, especially when the UK offense was matched up against the Missouri defense.

Oh yes, that final score of 20-10 was no indication at all of how Missouri was clearly in the driver’s seat from early in the second quarter to the final horn.

Although I’ll be the first to admit Stoops is spiking the Wildcat Gatorade with some type of unique potion as his team continues to show some serious “no quit” attitude. This may seem trivial to some UK football fans, but it is how foundations are laid for future success and wins. However, until this young team grows some more both physically and fundamentally it will come up short in the win column just like it has the last two weekends. The Wildcats will continue to fight through some aggravating growing pains on the road the remainder of this season.

Maybe they can squeeze out that sixth win and maybe they won’t. The only bet I would lay down is that these Wildcat gridiron warriors won’t quit. Their coach won’t let them and the foundation for future success is definitely being laid.

Two things won’t happen that normally do this coming Saturday when UK hosts the Georgia Bulldogs (Noon on ESPN) for its annual Senior Day festivities and final home game.

You won’t hear “Rocky Top” played by the Georgia band (UT is no longer the last game home or away of the season). And take a long look and maybe some photos of the Commonwealth Stadium skyline/ structure because it will never be the same. When you arrive next September for the 2015 season opener against Louisiana Lafayette, Commonwealth will be a new completely modernized college football venue, a renovation to the tune of 110 million dollars.

The game itself against the Bulldogs is kind of a good news-bad news situation. First the good news is the Bulldogs’ stud running back Todd Gurley will sit out the UK game for his final penalty administered by NCAA for rules violations. The bad news is all the Bulldogs will be at fever pitch emotionally and physically since Florida laid a pretty good whipping on them last Saturday and knocked them out of first place in the SEC east.