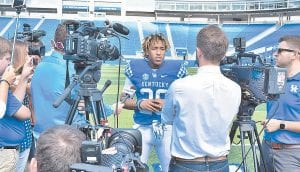 The college football season is nigh and it’s just a matter of time before Mark Stoops enters his sixth season at the helm.

The Wildcats have made progress in Stoops’s first five seasons, including back-toback postseason appearances during the past two years. I don’t see the bowl streak coming to an end this season and eight victories could be within reach for Kentucky. The team’s six must-win games are at Kroger Field this season, while road encounters — at Florida, Texas A&M, Missouri, Tennessee, and Louisville — will be challenging and the Southeastern Conference showdown against South Carolina is at home this season.

Although a starting quarterback has yet to be named, Kentucky has one player — Benny Snell — who will carry the load for the Wildcats, regardless who is under center.

The following is a breakdown of the schedule and how I think things will unfold during the three months.

The Chippewas have made four consecutive bowl appearances and are coming off an 8-5 campaign, but will have to keep the streak alive without the benefit of Shane Morris, but look for running back Jonathan Ward to have a breakthrough year. Kentucky shouldn’t have any issues in the season opener.

Even when Dan Mullen was at Mississippi State, the Wildcats had a hard time defeating the Bulldogs and things won’t be any easier now that Mullen is with a high-profile program. Kentucky came close to beating the Gators a year ago, dropping a 28-27 setback at Kroger Field. Mullen will have the upper hand in his SEC debut with the Gators.

The Racers have struggled during the past three years and have failed to win more than four games during each of those four seasons. Murray shouldn’t be a concern for Kentucky, which will get back on track pretty easily.

The Bulldogs will be treading new ground this season following Mullen’s successful eight-year run as the top dog in Starkville. Joe Moorhead is in his first season at Mississippi State and has some tools to work with on offense, including returning quarterback Nick Fitzgerald

The Wildcats defeated the Gamecocks 23-13 last season in Columbia, but that was before South Carolina turned things around and finished with a successful campaign, defeating Michigan 28-7 in the Outback Bowl. This game, one that the Wildcats desperately need to clinch an eight-win season, will be close, with Kentucky winning a nail-biter.

The obvious storyline is the fact that Stoops will be facing his former boss Jimbo Fisher, who is in his first season with the Aggies. After a successful stint at Florida State, a run that included a national title, Fisher steps into the SEC with an underachieving team. The chances of beating Texas A&M at College Station are slim to none for any team.

The Wildcats get twoweeks to recover from a brutal stretch and brace for the second half of the season against the Commodores. Vanderbilt will be exactly what the Wildcats need going into the final stretch of the regular season.

Missouri has a new offensive coordinator in former Tennessee coach Derek Dooley and coach Barry Odom had the interim tag removed from his title after the Tigers finished with a 7-6 record, losing to Texas in the Texas Bowl. Drew Lock is back as the team’s quarterback, which will be a challenge for opposing teams, including the Wildcats, but Kentucky will be strong enough to overcome Lock and the Tigers.

The Bulldogs defeated the Wildcats on a last-second field goal two years ago at Kroger Field, but have transitioned into a national power since then. Kentucky has traditionally struggled against the Bulldogs home and away and struggle to keep things close this time around.

The Volunteers have a new coach in Jeremy Pruitt and the presence of a defensive-minded coach will change the culture in Knoxville and return the Volunteers to supremacy in the East. Tennessee is hard to beat at home even in struggling times and it will be difficult for Kentucky to beat the Vols in a rebuilding phase.

Rick Stockstill is averaging seven victories per year in his 12 seasons at the helm. In order for the Wildcats to close with two straight wins, they will have to beat the Blue Raiders first and shouldn’t have any issues.

Kentucky’s last visit to Louisville was a success and things will likely be a little easier this season with Lamar Jackson no longer using the turf as a launching pad for his explosive runs and even dangerous throws. Kentucky should be able to overcome the Cardinals for the second time in three years.