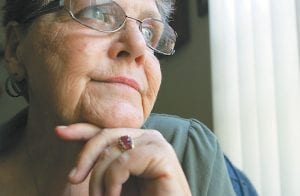 Rita Moore is shown looking out the window of her home in Corcoran, Calif. Moore is now diagnosed with advanced cancer and could not afford the prescription drug she needed to help stop the spread of the disease. She needed a drug called Sutent for kidney cancer, but the pharmacy was going to charge her $2,400 for a month’s supply. (AP Photo)

Facing a life-and-death struggle with kidney cancer, Rita Moore took her prescription for a new kind of chemotherapy pill to her local drugstore.

She was stunned when the pharmacist told her the cost for a month’s supply would be $2,400, well beyond her income.

Medicare drug plans that cover seniors like Moore are allowed to charge steep copayments for the latest cancer medications, whose cost can run to tens of thousands of dollars a year. About 1 in 6 beneficiaries aren’t filling their prescriptions, according to recent research that has put numbers on a worrisome trend.

Officials at Medicare say they’re not sure what happens to those patients — whether they get less expensive older drugs that sometimes work as well, or they just give up. Traditionally, chemotherapy has been administered intravenously at a clinic or doctor’s office. Pills, a relatively new option, are thought to represent the future of cancer care.

Moore, 65, was operated on in February for an advanced form of kidney cancer. She said both her cancer and kidney specialists agreed that a drug called Sutent probably offered the only chance to keep the disease in check. It’s a capsule taken at home.

But she was unprepared for what happened when she went to fill her prescription.

“ I cried,” said Moore, who lives in a small town in central California. “What can you do when the only thing out there that can maybe give you some quality of life is unaffordable? I was devastated. I didn’t know what to do.”

Private insurance companies that deliver the Medicare prescription benefi t say the problem is that drug makers charge too much for the medications, some of which were developed from taxpayer-funded research. The pharmaceutical industry faults insurers, saying copayments on drugs are higher than cost-sharing for other medical services, such as hospital care.

Others blame the design of the Medicare prescription benefit itself, because it allows insurers to put expensive drugs on a socalled “specialty tier” with copayments equivalent to 25 percent or more of the cost of the medication.

“This is a benefit design issue,” said Dan Mendelson, president of Avalere Health, a research firm that collaborated in a recent medical journal study on the consequences of high copayments for the new cancer drugs.

Cost-sharing should only be used to deter wasteful treatment, he explained. “It is hard to make the argument that someone who has been prescribed an oral cancer medication doesn’t need the drug,” added Mendelson.

The study last month in the Journal of Oncology Practice found that nearly 16 percent of Medicare benefi ciaries did not fill an initial prescription for pills to treat cancer, a significantly higher proportion than the 9 percent of people with private insurance who did not follow through.

Forty- six percent of Medicare beneficiaries faced copayments of more than $500, as compared to only 11 percent of patients with private insurance. Among people of all ages, 1 in 4 who faced a copayment over $500 did not fill their prescriptions. Cancer is more prevalent among older people.

“Obviously, we’re leaving a lot of folks off the bus, standing at the curb, if they can’t afford the medications,” said Dr. Lowell Schnipper, who chairs the American Society of Clinical Oncology’s task force on the cost of cancer care. It advises doctors to discuss costs with patients up front, to avoid surprises.

Medicare officials say there are currently no plans to rework the design of the prescription benefit.

But “nobody is more concerned about access than we are,” said Dr. Jeff Kelman, Medicare’s chief medical officer.

For many seniors, Kelman suggested, the situation is not as bleak as what Moore encountered. For example, the prescription plan is designed so benefi- ciaries who are poor or near poverty face only token copays. For the rest, President Barack Obama’s health care law gradually closes the coverage gap known as the “doughnut hole.” This year, the new law provides a 50 percent discount on brand name drugs for those in the gap.

The gap starts after Medicare recipients and their insurance plan have spent $2,840 on medications. After that, seniors are responsible for roughly the next $3,600. Once total spending reaches about $6,440, Medicare’s catastrophic coverage kicks in and beneficiaries pay only a small amount.

Yet the health care law could be struck down by the courts or repealed if Republicans win the White House and Congress next year. Even if the law stands, assistance after seniors end up in the gap doesn’t take away the initial shock at the pharmacy counter.

“The underlying problem is with the basic structure,” said Joe Baker, president of the Medicare Rights Center, a New-York based advocacy group. “Even before you get to the doughnut hole, you’ve got a problem.”

One solution would involve requiring drug plans to lower copayments for cancer pills. But the tradeoff is likely to be an increase in premiums for all benefi- ciaries.

Rita Moore had to try to find her own way out of the dilemma. She lives in Corcoran, Calif., and still works as resident manager of an apartment building for seniors.

Moore decided to apply to Pfizer’s prescription assistance program for patients who can’t afford Sutent and other drugs the company makes. Pfizer approved a year’s worth of free medication, but it took about two months to collect and review all the medical and financial paperwork.

“They were very helpful, but it wasn’t a fast process,” said Moore. In the meantime, she wasn’t being treated. The cancer spread and is now close to her spine and her body’s main artery.

“This is kind of strange,” Moore said. “After you’ve worked all your life, you get something catastrophic and you run into news like your drugs are going to cost $2,400.”