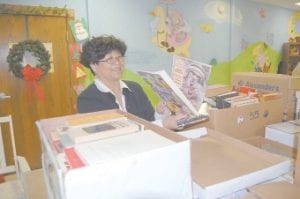 Lena Tidal, director of the Letcher County Public Library District, smiled as she pulled children’s books out of a box on Dec. 10 in the basement of the Harry M. Caudill Memorial Library in Whitesburg. Jim Davis, a Bullitt County man who is battling terminal cancer, decided to collect 10,000 books from friends, families, churches and other organizations to be distributed to libraries in eastern Kentucky.

Lena Tidal, director of the Letcher County Public Library District, rummaged through boxes to see what books were donated to the library system by a Bullitt County man who is battling terminal cancer.

“Some are new,” said Tidal, as she held up books in the basement of the Harry M. Caudill Memorial Library in Whitesburg on Dec. 10. “Some are used. Some are textbooks. Some are bestsellers. Oh, this is so great.”Tidal said the donation of about 4,000 books will be sorted and then librarians from the Blackey, Jenkins and Neon branches will come and pick books out to take to those libraries.

Jim Davis, who has cancer in his hip, brain and lungs, was recovering from radiation treatments at his Shepherdsville home earlier this year when he was impacted by a documentary on Appalachia. Because a high number of teenagers drop out of high school, Davis decided to collect 10,000 books from friends, families, churches and other organizations to be distributed to libraries in eastern Kentucky.

“This is a mission he wanted to do before he died,” said Tidal.

A variety of books were donated to Davis’s project from all over the nation. Barnes and Noble donated 7,000 books.

“Mr. Davis’s story is truly a testament to the power of one,” said Beshear in a press release. “Thanks to his kindness and generosity, libraries will be able to help children find a love of reading, learning and lay a strong foundation for their future through education. His altruism is an inspiration to us all.”

Jeanette Ladd, chairman of the Letcher County Library Board, said the donated books will enhance the children’s reading programs in the county libraries.

“We are just excited because we have so many children who don’t have the opportunity to purchase books and this will put them on the same level as everyone else,” said Ladd.

Tidal said the extra books will allow the library system to save some money it would have used to purchase books and put that money toward other projects.

“With the economic situation the way it is, we will be able to save our money for equipment and building funds,” said Tidal.

Tidal said she has seen a recent increase in the number of people who borrow library books and movies.

“People who cannot go to the movies come and get their movies here,” said Tidal.

Tidal said more than 3,000 DVDs and 75,000 books are available to check out countywide.