Cancer takes teen who inspired many 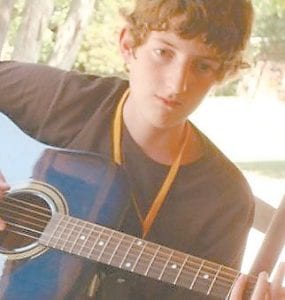 A Jeremiah teenager who has inspired many people in Letcher County because of his faith, positive attitude and love for others has died of cancer.

Travis, who had been diagnosed three times with cancer, was diagnosed in 2009 with stage four brain and spinal cancer.

“Travis was an inspiration to everybody,” said Doris Banks, cochair of Letcher County Relay for Life, at his funeral service on June 18 at Letcher Funeral Home. “He loved everybody. No matter what he was doing, he thought of others.”

Travis was named honorary chairperson of Letcher County Relay for Life in 2010.

“Whether it was putting together a concert benefit, encouraging people to give time, money and effort, or auctioning off a date with an amazing young man, Travis gave all of himself to help others, and he did it out of love,” wrote Brian Baker in a letter that was read during Travis’s funeral service. “Travis understood what life was about — loving and serving others, especially those in need. He made such an impact and inspired thousands of people, and all because he was willing to do the right thing and stand up for God and others.”

Alberta Perry, chairperson of Letcher County Relay for Life, said Travis inspired so many people to get involved in Relay for Life.

“He made me want to work harder to find a cure,” said Perry. “He was an awesome asset to Relay.”

Perry credits Travis’s courage, strength and faith as reasons why people are inspired by him.

“He just had so much willpower to fight,” said Perry. “Most people wouldn’t have lasted half as long as he did.”

Jarrod Stamper, of Whitesburg, said it’s amazing to see what a profound impact one individual made on others.

“He was only here for 17 years, but he touched the hearts of so many,” said Stamper. “Travis is without a doubt a community hero. He taught us the true defi- nition of a fighter and inspired us with his courage.”

Baker, a cancer survivor formerly of Letcher County who lives in Wisconsin, said Travis lived like there was no tomorrow and he encouraged those in attendance at the funeral service to do the same.

“Share your love for one another,” wrote Baker. “Have compassion on those less fortunate. Forgive those who have hurt you. Reconcile and restore broken relationships. And most importantly, tell people about the truth of Jesus.”

Travis’s father, John Morton, said if Travis has inspired people as they say he has, then Travis has planted seeds in their hearts and they shouldn’t let those seeds wither away.

“Show someone kindness and love and you will be paid back tenfold,” said Mr. Morton.

A son of John Paul and Melody Ann Brown Morton, Travis is survived by a brother, Ryan Douglas Morton; maternal grandparents, Roland and Ruth Brown, of Jeremiah; and paternal grandmother, Polly Morton Collins, of Littcarr. He was preceded in death by paternal grandfather Uriah Morton.

Burial was in the Mary A. Blair Cemetery in Jeremiah. Letcher Funeral Home had charge of arrangements.