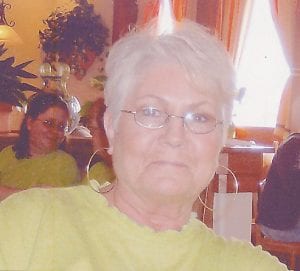 When Freida Ratliff learns that someone in Letcher County has breast cancer, she calls them to offer her support.

Ratliff, 66, of Little Colley, was diagnosed with breast cancer in October of 1997.

At the time she was 52 years old and her father, James W. Buttrey, had been diagnosed with a brain tumor about five months prior. She didn’t want her father to know that she had breast cancer and she said he never found out. He died in 1998.

“I didn’t worry about myself,” said Ratliff. “I worried about Dad.”

Her mother was busy taking care of her father so Ratliff said she relied on other family members, friends and those in her Kingscreek Community Church to help her.

Her two sons were grown. One son lives in Pennsylvania and one in Georgia.

“I didn’t have to worry about childcare,” said Ratliff. “I told them what they needed to know and left it at that.

“I always had two or three friends going with me to chemotherapy,” said Ratliff.

She traveled to Lexington for four rounds of chemotherapy that were three weeks apart.

“I was cute as a button,” said Ratliff. “My philosophy was when you don’t have hair, wear bigger earrings and that is what I did. Losing my hair did not bother me at all.”

Ratliff wore hats on most days and wigs when she would visit her father.

Ratliff participated in a program called “Look Good, Feel Good” at the cancer center in Lexington that showed her how to put on makeup.

“ That’s a wonderful thing,” said Ratliff. “It gives you a real lift.”

She was also provided a wig through the program.

Ratliff demanded that both breasts be removed, even though cancer was found in one of her breasts.

“You’ve got to stand up for yourself, but sometimes you have to pick your battles,” said Ratliff.

She said the doctor didn’t want to remove both breasts.

“The only advice I can give is to get rid of both of them,” said Ratliff. “I have so many friends who the breast cancer has come back in the other breast. I believe with all my heart that is why I am here today.”

Ratliff has lymphedema in her right arm and has undergone therapy for it.

“I do have some problems,” said Ratliff.

She had breast reconstructive surgery in 2000.

Ratliff encourages women to have yearly mammograms at age 40 and do self breast exams.

“The dumbest thing I ever did was I went 10 years without a mammogram,” said Ratliff, whose maternal grandmother had breast cancer and died when Ratliff was nine months old.

Ratliff went for a physical exam and mentioned to her doctor that she had a place on one of her nipples. She said the place had probably been there for at least a year.

“It looked like a paper cut,” she said. “He said I had a tumor and he sent me to the cancer center in Lexington.”

Ratliff said she was in shock when she first found out that she had cancer.

Kathleen Sexton, a woman who lived on Campbranch and died of breast cancer a couple of years ago, called Ratliff one day and told her that she had gone through what she was going through. Sexton told Ratliff she was available if she needed someone to listen to her.

Sexton and Ratliff had both been bookkeepers. Ratliff was a bookkeeper and office manager for 25 years before she retired.

“The gift she gave me was to pass it on,” said Ratliff. “I just talk to them and try to be a support for them just like Kathleen did for me.”

Ratliff said she has called at least 10 to 12 women and has encouraged them.

“Maybe I wouldn’t have done this if Kathleen hadn’t done that for me,” she said. “She just instilled in me how much it means to just have someone available who has been there. I have made some real good friends.”

For those who have recently been diagnosed with cancer, Ratliff suggests for them to get a good prayer line going.

“That is so important,” she said. ““I’m the type of person that I don’t hide my problems because how are people going to pray for me if they don’t know?”

She also suggests getting a good support system in your family and finding a trustworthy doctor.

“You have to stay positive,” said Ratliff.