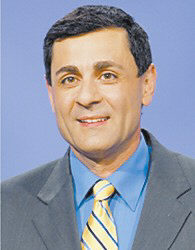 State Senator Daniel Mongiardo told an audience here that he is seeking the office of lieutenant governor so he can focus on fixing Kentucky’s problems with providing quality health care at an affordable price.

“I chose to run for lieutenant governor so I could focus on health care,” said Mongiardo, the running mate of Democratic gubernatorial candidate Steve Beshear. “The entire country is searching and looking for answers on health care. Health care is the largest industry in the United States and the infrastructure is paper-based. It’s very important to consider how costs can be reduced.”

Dr. Mongiardo, an ear, nose and throat specialist in Hazard, told a crowd at The Courthouse Cafe in Whitesburg last week that as a physician he has already explored several ways to make health care more accessible to a larger number of people and less expensive. He said taking the paperwork out of the health care process and replacing it with the electronic transmission of data would save millions of dollars while expediting the process.

Mongiardo said he and Beshear have many plans for eastern Kentucky, including making both the Mountain Parkway and Kentucky Highway 15 four-lane roads all the way from Prestonsburg and Whitesburg to Campton. Mongiardo said improved access to the mountains will become increasingly important as tourism grows in popularity in eastern Kentucky.

“We’ve missed what’s right under our noses,” said Mongiardo. “Our mountains and our people. We need to capture the mountains. We can make this area the adventure tourism destination for America.”

Mongiardo said in order for eastern Kentucky to prosper as a tourism destination it will take careful planning and some investment to help provide tourism opportunities. He said while he has enjoyed trips to Gatlinburg, Tenn., he does not see that type of development as what is right for eastern Kentucky, but pointed to the possibility of adventure tourism such as horse trail rides. He emphasized the success of the all-terrain vehicle trails in Harlan County as a possibility for areas honeycombed with strip mine and logging roads. He also said a Beshear/Mongiardo administration will focus heavily on improving education throughout the state.

“The American dream is for your kids to live a better life than you did,” said Mongiardo. “Education is the key. We can’t make it without education, but the United States is only the 17th most educated country in the world. Kentucky is at the bottom tier of that.”

Mongiardo said one answer to the education situation, which can also have a big impact in preventing drug abuse, is to get kids into pre-school programs early and to emphasize reading, mathematics, and drug prevention. He said early childhood education has been proven to increase test scores later in school and to reduce drug abuse problems as well.

Mongiardo also spoke about the emphasis Beshear has placed on getting casino gambling placed on the ballot in order to allow Kentuckians to decide the issue for themselves as a possible way to finance improvements in education without raising taxes.

Not having casino gambling in Kentucky doesn’t mean that Kentuckians will gamble less, Mongiardo said, it just keeps the state from getting the financial windfall from gaming enterprises.

Mongiardo emphasized that the Beshear proposal is designed to allow the citizens of Kentucky to decide the gambling issue by having it placed on a statewide ballot rather than leaving it up to the state legislature to decide.

Mongiardo said current polling shows the Beshear- Mongiardo ticket to be in the lead for the Democratic primary. He said he and Beshear hope to get the 40 percent of the votes needed to avoid a runoff election. (A recent law passed in the General Assembly mandates a runoff in primary elections if one candidate fails to get 40 percent of the primary vote.)

He said the campaign is being helped by editorial endorsements from the state’s largest daily newspapers – the Courier- Journal in Louisville and the Lexington Herald-Leader.

“The race is getting interesting now,” said Mongiardo. “Everything is in place. We got the Courier-Journal endorsement on (May 7) and we expect the Herald Leader to endorse us this Sunday.” (The Herald-Leader did endorse the Beshear- Mongiardo ticket in its May 13 edition.)

Mongiardo said Beshear is the most experienced candidate in the race, and he hopes to have eight years to observe Beshear as he governs the state. He said Beshear’s earlier stints as state legislator, attorney general and lieutenant governor in the Martha Layne Collins administration show his broad experience in state government.

“I don’t know anybody anywhere who has more experience in state government,” said Mongiardo. “I hope to learn from him for eight years and then I will be the most experienced candidate for governor to ever be elected.”

Mongiardo also took the time at last week’s gathering to talk about his family connections in Letcher County.

He said his father and his uncle, Frank Majority Sr., immigrated to the United States from Italy early in the last century. Majority settled in Whitesburg while his father kept the Italian version of the family name and settled in Hazard. Mongiardo said Frank Majority Sr. helped build several stone buildings in Whitesburg, including the Graham Memorial Presbyterian Church, where he become a deacon after leaving the Catholic Church. However, Mongiardo said that when his uncle found out he had terminal cancer he returned to the Catholic Church. He said that when asked why, Majority Sr. replied, “I’ve found out I’m dying. Dying is too important to leave to the Presbyterians.”