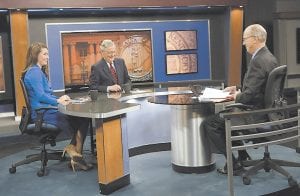 Kentucky Secretary of State Alison Lundergan Grimes, left, and U.S. Senator Mitch McConnell, center, shared a laugh with moderator Bill Goodman during Monday night’s debate on KET. The debate is the only one scheduled between the two candidates. (Photo courtesy KET)

Coal, jobs, and the Patient Protection and Affordable Care Act were the major subjects of this week’s debate between Republican U.S. Sen. Mitch McConnell and Democratic challenger Alison Lundergan Grimes.

The hour-long debate on KET Monday reflected the course of race, in that Grimes spent most of her time attacking McConnell, and McConnell did likewise with President Obama, trying to link Grimes to him.

The candidates swerved around many questions, avoiding definitive stances and leaving Kentucky voters unclear of the specifics.

Perhaps the best example of that was discussion of the healthcare law, generally known as Obamacare.

McConnell reiterated that he wants to repeal it “root and branch,” but he was pressed to say what he would do with Kynect, the state health-insurance exchange created under the law, which he repeatedly called a website.

Asked what would happen to Kynect if the law were repealed, he said, “The state exchange can continue it if they want to. . . . States can decide whether or not to expand Medicaid, and our governor has decided to expand Medicaid.”

Obamacare funds subsidies for private insurance bought through the website. It pays the entire cost of Medicaid for newly eligible patients through 2016, falling to a floor of 90 percent by 2020.

Pressed about whether he would support the continuance of Kynect, McConnell said, “That’s fine, yeah, I think it’s fine to have a website.”

Grimes, asked how she would vote on a bill to repeal Obamacare, said, “There is work that we have to do to fix the Affordable Care Act, but we have to have a senator that actually realizes what the realities are here in Kentucky, and the fictional fantasy land that Mitch McConnell is in, doesn’t show the statistics here in this state.”

Earlier, she said, “ This is a matter of standing up for 500,000 Kentuckians” who have obtained coverage through Kynect.” She added, “I will not be a senator that rips that insurance from their hand.” But she offered no new specifics on how she would “streamline” the law.

The debate was dominated by economic issues, which for both candidates included support of Kentucky’s declining coal industry in the face of Obama administration regulations that would stop construction of coal-fired power plants by putting limits on carbon dioxide, a greenhouse gas.

Asked if the U.S. should take the lead in fighting climate change, McConnell said, “My job is to look after Kentucky’s coal miners.”

Grimes said, “I recognize, unlike Senator McConnell, the realities of global warming, but I do believe we have to take a balanced approach” that protects jobs and “leave this world a better place.”

Grimes noted her endorsement by the United Mine Workers of America and said she supports measures to improve coal mine health and safety and guarantee miners’ benefits.

McConnell said that Grimes’s first vote in the Senate would be to re-elect as majority leader Democratic Sen. Harry Reid of Nevada, who he said has blocked all legislation aimed at the anticoal regulations. He said Grimes broke her vow to raise the issue at a fund-raiser Reid held for her.

Grimes has said she raised the issue with Reid privately. Last night, she said, “I did have very strong words for Senator Reid regarding an energy policy that he is misguided on.”

McConnell said in the debate’s opening exchange, “My opponent has spent most of her time trying to deceive everybody about her own views.” Regarding her widely reported refusal to say whether she voted for Obama, even though she was an Obama delegate to the 2012 Democratic National Convention, he noted that some Democratic officeholders chose not to attend the convention.

Moderator Bill Goodman asked Grimes why she has been reluctant to say how she voted. She replied, “Bill there’s no reluctance. This is a matter of principle. Our constitution grants, here in Kentucky, the constitutional right for privacy in the ballot box, for a secret ballot.”

Grimes said that as secretary of state, Kentucky’s chief election offi cial, she was obligated to protect such rights. “I’m not going to compromise a constitutional right . . . to curry favor with one or the other side, or members of the media.”

McConnell replied, “There’s no sacred right to not announce how we vote.”

The candidates argued some facts in the debate, and their campaigns kept arguing afterward.

Grimes said a bill to allow refinancing of student loans was bipartisan, but McConnell said it was not. Grimes campaign manager Jonathan Hurst noted afterward that there were 58 votes to end McConnell’s filibuster against the bill; the Senate has 55 Democrats.

Grimes repeatedly advocated raising the minimum wage, but McConnell said that would cost too many jobs in a soft economy and said it would be better to expand the earned-income tax credit for the working poor. Hurst said McConnell introduced legislation to cut the credit in 2010.

McConnell senior adviser Josh Holmes disputed Grimes’s charge that McConnell had voted to keep tax breaks for shipping jobs overseas: “That’s received the worst possible false rating in almost every publication that’s reviewed it, yet she continues to talk about it.”

The candidates agreed on at least one thing, that the greatest accomplishment of the next sixyear Senate term would be to bring more jobs to Kentucky. McConnell said he would be better able to do that because “there’s a great likelihood I will be the leader of the majority,” while Grimes said noted that she had released a jobs plan and McConnell hadn’t.

This report was written by Brenton Ward, Cheyene Miller, Tyler Spanyer, Ben Tompkins and Megan Ingros, students at the University of Kentucky School of Journalism and Telecommunications.