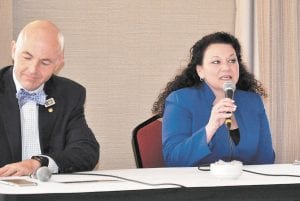 A diverse group of candidates, including two from Letcher County, gathered Monday night in Pikeville to discuss the region’s needs and to make a case to voters as to why he or she would be the best person to replace 94th District State Representative Leslie Combs when she leaves office later this year.

Democrats Angie Hatton and Joel Thornbury and Republicans Colin Fultz and Charles Phillip Wheeler attended a candidate forum and made their cases as to why he or she would be the best person to send to Frankfort to represent part of Pike County, including Pikeville, and all of Letcher County in the state legislature.

Fultz, a former coal miner and business owner, whose businesses include the Kentucky Mist Moonshine distillery in Whitesburg, said his experience in the coal industry makes him the best person to send to Frankfort for the district.

“What better person to put in Frankfort to help the coal miners, than a coal miner?” he asked. “I know what it’s like to go underground and work every day and work two jobs and start other businesses and worry how you’re going to make it.” 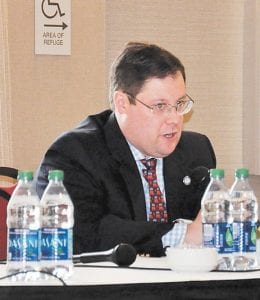 Fultz said he believes he would be the best person to “get the jobs” for the area.

Hatton, an attorney from Whitesburg, said she is running to make a better community for her children and the other children in the region.

Hatton said she has seen so many people move away from the area because of the lack of economic opportunity and believes people need strong, trustworthy leadership in Frankfort.

“The only reason that I would do this … is because I feel like somebody has to,” she said.

Thornbury, a Pikeville pharmacist, said he represents a “different” choice for the people of the area.

“I’m different than anyone else up in Frankfort,” he said. “I’m a pharmacist. I deal with people’s lives every day and I watch and care for those people who put their faith in me. If you’re not happy with the way politics is now, we have to begin to look outside the box.” 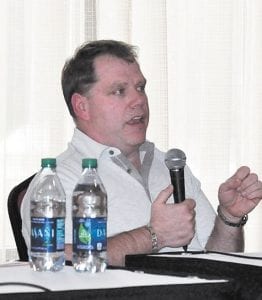 Wheeler, a Pikeville attorney, said his family’s history has been one of helping people, including his grandfather, who served as a state representative in the 1960s.

“I want to continue that tradition in our legislature,” he said. “And I feel I’m the best one to do that because I am a lifelong Republican. I am connected to the new Republican majority and I feel like I’m the best person to work with Gov. (Matt) Bevin, Sen. (Robert) Stivers, and the new Republican leadership, (Rep.) Jeff Hoover, to accomplish the things we need done in the 94th District.”

The candidates each had different focuses for what their first bill may be, if elected. Thornbury said his would deal with easing access for grandparents and others to foster children. Hatton said hers would focus on “following the money” to the sources of prescription drug addiction. Fultz said his would be on anything that could be done to make it easier on businesses to locate in the region. Wheeler said his focus would be on changing the current process of setting the Kentucky Public Service Commission by appointment to change to an election process.

NEED FOR GROWTH, FOCUS ON TOURISM

All of the candidates agreed that the needs of the area, in the face of economic struggle, are great, but that the state can contribute to that.

Fultz said he is focused on bringing jobs to the area.

“We need something that’s going to take the place of coal mining,” he said, but added that industry brought in must bring pay scales which rival that of the coal industry. “We need to attract something that’s really going to help us here.”

However, he said the state must work more actively, and not just send issues to committees where action languishes for weeks and months.

“Months turn into years and then nothing happens,” he said. “The main thing is to get people that can make the changes there to make something happen.”

Hatton pointed out that the area’s leaders, in the past, failed to prepare for the eventual demise of the coal industry.

“Our leaders in the past have failed to diversify,” she said. “We didn’t plan for this.”

Businesses, the government and community organizations, Hatton said, must work together to help reach the goals of diversity.

And, she said, the legislature can be a factor in that.

Thornbury said the people of the 94th District live in the “best area” anywhere, but have lost hope. The coal industry, he said, is unlikely to return with the strength it once had.

“If it does come back, it’s coming back at a fraction of what it was,” he said.

Thornbury said the state must invest in small business and invest in the rest of the area the way it has invested in Pikeville.

Wheeler said he believes strongly in the future of the district.

Wheeler said some progress has been made in replacing the jobs lost in the coal industry, but there’s still a lot of work to be done.

“We still aren’t there yet,” Wheeler said.

The candidates agreed that tourism will be key to future success.

Fultz, who also serves on the Letcher County Tourism Commission, said that city has done a lot to work toward attracting tourists.

“Everything’s going to revolve around tourism,” he said. “That’s really the only thing we’ve got going for us, is the look of the area.”

And, he said, by bringing events and bringing new people here, the community can attract them back.

“Once these people come in and see how it is here, they’ll come back,” he said.

Fultz said he intentionally opened his distillery in such a way that it would be attractive to tourists.

“I made it in Whitesburg so we could have a tourist attraction,” he said. “That’s what’s going to help us in our economy is thinking like that.”

Hatton said the tourism projects that have taken place in the 94th District, especially since they’re the result of cooperative efforts, are encouraging.

“If we continue to focus on that, people get in here,” he said.

Wheeler lauded the efforts of officials in Letcher County, including Whitesburg Mayor James Wiley Craft, in making the area a tourist destination and said they need support.

A NEED FOR ENTIRE DISTRICT TO BE REPRESENTED

Fultz said he will be for the entire area, not just one section.

Hatton said there could be some jealousy because of the growth in Pikeville.

“Letcher feels a little left out and we’re the majority of the 94th District,” she said.

However, she said that cooperation is what’s needed for success.

“I think the worst thing we could do at a time like this is to turn against each other,” Hatton said. “Looking across the county line from Letcher, it looks you’re doing pretty well over here.”

Hatton said she understands that Pikeville, too, is suffering, but that it would be easy to be jealous of the progress occurring in Pikeville. That, however, is not what needs to occur.

She said the best outcome would occur if the other communities learn from what’s happened in Pikeville.

Thornbury said there are areas in the district — which is made up of parts of three separate river valleys (Kentucky, Big Sandy and Cumberland) — which have not received as much attention over the years.

“I don’t like the fact that, in Partridge, we don’t have water and sewer,” Thornbury said. “We have an area of our district that has no access to water and sewer, thus you’re looking at a community … that is sicker than the rest of the 94th. I’m not promising water, but I’m promising the fact that we need to look at that aggressively and, if it’s not coming from the government, it needs to come from other sources.”

Wheeler, too, pledged to work for the entire district.

Pikeville, he said, has been the beneficiary of a lot of attention, but the rest of the area contributes to Pikeville’s success as well.

There was some discussion on coal severance allocations, including the pending lawsuit by Pike County against the legislature over the way single-county coal severance is allocated.

Fultz did not weigh in on the issues regarding coal severance allocation, except to echo a call which has gone up in Frankfort over the past few years that coal severance should be returned to counties such as Pike and Letcher, where the coal is mined.

“One hundred percent of coal severance tax should go to coal-producing counties,” he said.

Hatton said the issue regarding the allocation of coal severance is an issue of trust.

“ If you have to sue your legislators, you probably shouldn’t have elected them,” she said, adding that having legislators the people can trust is the best way to prevent issues such as that which has occurred with coal severance.

She also said she doesn’t like the controversy which has recently occurred over the potential allocation of coal severance funds.

“What I don’t like is to publicly read about (the legislators) fighting,” she said.

Thornbury said there needs to be changes in the way coal severance is allocated.

Wheeler took aim at officials in the City of Pikeville, criticizing them for waste, such as the failed commercial air service at the Pikeville-Pike County Airport, which he said was an example of wasted coal severance money.

“The airline service debacle has to be one of the greatest among them,” he said.

“I do believe there is some place for legislative input on the projects in the area,” he said. “The coal severance tax needs to be spread over our entire region … I do believe it needs to be focused on projects that benefit our entire area — roads, bridges, water projects. I don’t think it should be misused.”