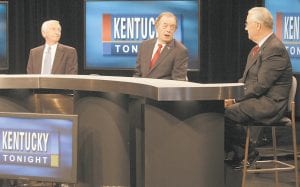 In their final encounter before next Tuesday’s election, a debate televised statewide on Halloween, the candidates for governor ramped up their attacks and developed deeper contrasts on a range of issues.

Galbraith was less specific about how he would do that than Williams or Beshear, who have been battling since Beshear became governor four years ago, in Williams’ eighth year as Senate president.

Williams repeatedly said that Beshear “has no agenda,” while Beshear said he expects that he will have an easy victory that will be “a strong message we don’t want this obstructionist kind of politics.”

In a new area of disagreement, Beshear said he favors a constitutional amendment that would automatically restore voting rights to convicted felons who have served their sentences, “because in 48 states this is automatic.” Galbraith agreed, but Williams said he opposed the idea and said Beshear had abused the current process for what Williams calls “partial pardons.”

“I haven’t pardoned anybody,” Beshear said, “What we do is the same thing that every governor before me has done.” He said that rights are restored only if the prosecutor in the case approves, but Williams cited the case of a notorious child abuser in Lexington who got his rights back, to the surprise of the commonwealth’s attorney.

Beshear said the prosecutor “said he never got the letter” asking him about the case, and “We tightened up the procedure to make sure that communication is there.”

The first major exchange of the debate was over Beshear’s economic-development policies, which Williams has said the governor uses to pick winners and losers.

“Not at all,” Beshear said, noting that Williams voted for his bill to expand incentives. Williams said he voted for it because he added to it an income-tax exemption for military pay, which Beshear opposed.

Williams said the state relies on incentives “to overcome obstacles we have in competition with other states. I say tear down the obstacles,” such as the state’s tax and unemployment-insurance systems, and enact a “right to work” law. “We need broad and bold leadership and changes.”

Galbraith said, “ I’m against using tax incentives … to give money to big corporations to establish $8-an-hour jobs. … Let’s elevate our gaze and give it to jobs that are gonna pay for themselves after a while.”

Beshear then repeated his point, made in the trio’s first televised debate on Oct. 11, that the fence-supply business of Williams’ fatherin law, Terry Stephens of Russell Springs, “entered into an agreement with us” for incentives to create 25 jobs, and read what he said was a statement from the company.

Williams, in the first of several indignant moments, replied, “How disingenuous can you be, Governor? Have you no shame?” He said the statement was from a press release, and “What is anybody going to say? … Stephens Pipe and Steel has not accepted a dime and will not accept a dime from you.”

To receive the incentives, which are in the form of a tax credit, companies must claim them on their state tax returns.

Williams pressed his case, telling Beshear, “You haven’t created any jobs other than the jobs you created for Jerry Abramson’s friends who came over from Louisville,” where Abramson was mayor before becoming Beshear’s running mate for lieutenant governor.

As Beshear stared at Williams with an air of his own indignation and intensity, the challenger added, “The governor wants to pick and choose and get personal about these things. That’s the mean-spirited side of the nice Steve Beshear.”

Beshear shot back, “What he said that’s right is, I am coming back.”

The two men went at it over expansion of gambling, which was Beshear’s main platform plank in 2007 but has made little progress in the legislature. Beshear again blamed Williams for that, and Williams repeated that Beshear was so weak he couldn’t get a constitutional amendment on gambling through the majority-Democratic House.

Beshear said of the Senate, “Everybody knows he runs that place with an iron fist,” and Williams replied, “I’ve never stopped the process.” Beshear responded, “It’s the Republican senators who are weak and won’t stand up.” Williams shot back, “No wonder you have so little success” with legislators.

When Beshear said he would press the issue next year, Williams pressed him in vain to reveal details, finally saying, “This is the most ineffectual governor in history.”

The debate, part of KET’s “Kentucky Tonight” series with Bill Goodman, was also broadcast on C-SPAN3 and public radio stations in Central and Eastern Kentucky. It can be watched by videostream at www.ket.org.

Al Cross is director of the Institute for Rural Journalism and Community Issues and an associate professor of journalism at the University of Kentucky. He was political writer for The Courier- Journal and still writes a twice-monthly column for the Louisville newspaper.