Can’t afford a birthday party for your child? Call this group 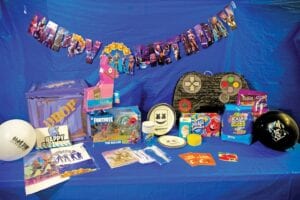 Pictured above is a party package supplied by The Birthday Fairy, a Letcher County nonprofit organization. The package includes decorations, gift cards for pizza and other items needed for a birthday celebration. The organization’s efforts are funded entirely through fundraising and donations and aims to benefit those in need.

A dozen kids have experienced the joy of a birthday party all their own this year thanks to the work of a group of volunteers in Letcher County.

Kayla Morton, of Premium, said she headed a volunteer effort in December to collect Christmas gifts for local children who, otherwise, may not have gotten to experience the joys of the holiday season. Morton said as Christmas approached and the collection wound toward completion, she felt a burden, an “empty feeling because I knew I was done” with the gift collection, and she felt like there was more work to be done. Then, she said, she began having a recurring dream.

“One night, I had a dream that I paid for a birthday party for a child. So, the next day, I posted on Facebook that if anyone knew of a child who needed a party, I wanted to pay for it,” she said. “I got some responses, but I kept having this dream.”

Soon, Morton said, she contacted several trusted friends with an idea: A group of volunteers working to sponsor birthday parties for area children whose parents or guardians may not be able to afford a party. When volunteers Sam Mullins, Robin Ison and Samantha Mullins stepped up to join, “The Birthday Fairy” was born. 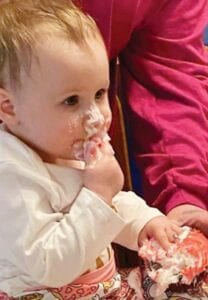 Isabella Gibson celebrates her first birthday with cake and other items provided by the Letcher County nonprofit group The Birthday Fairy, which has provided birthday parties for nearly a dozen children in the county. The organization, headed by four Letcher residents, donates cake, decorations and gifts for children who may otherwise not receive a birthday party due to financial or other hardships.

Morton said the mission of The Birthday Fairy, a certified 501(c)3 nonprofit organization, is simple: To fully provide a birthday party experience for a deserving child, or for an intellectually disabled person of any age. The experience, she said, includes a party package with a birthday cake and a candle, decorations and party favors, table settings for up to 24 people, pizza and a gift valued at approximately $50. The party package, with items all purchased through fundraising activities by The Birthday Fairy volunteers, is delivered to the recipient’s guardians in time for the party. As of the end of January, The Birthday Fairy had provided birthday parties for 12 children, including one in Texas.

Morton admits that the labor of love, which is open to benefitting children across, mainly, Kentucky, has been overwhelming.

But, Morton said, the hard work of the volunteers has been worth the effort.

Morton said several of The Birthday Fairy’s clients — all of whom whose identities remain confidential outside of the organization — have been children in foster care who have never experienced a birthday party of their own. One client, she said was a 13-year-old who, thanks to the group, received his first-ever birthday cake. Morton she and the other volunteers typically do not take part in the party, but they sometimes get to witness the joy they provided when parents or guardians send them photos and letters of the birthday child enjoying their party and opening their gift. She became emotional while discussing the endeavor.

“We really want to make these kids feel loved, like they matter and like they’re important,” she said. “We’re not just giving these kids a birthday party. We’re giving them joy and hope, and we’re giving these parents room to breathe with not having to worry about throwing a party for their children, and just being able to sit back and enjoy it with them.

“It’s one of the biggest blessings of my entire life,” she said.

Morton said donation boxes for The Birthday Fairy are placed at businesses across Letcher County, including at the following: In Whitesburg, at Hot Spot Tattoo Parlor, Captivate Salon and Spa, Waggin Tails, Jenny Lea Academy of Cosmetology and Kentucky Farm Bureau Insurance, and at Black Sheep Brick Oven Bakery in Hemphill. She said those donations, both cash and gift cards, help to supplement the fundraising efforts of the group’s volunteers, without whom none of the success The Birthday Fairy has already experienced would be possible.

“We need these trustworthy people to make this happen,” she said.

Morton said The Birthday Fairy does not just serve children. She said people with intellectual disabilities are also eligible for party experiences, and there is no age limit for those clients to be eligible.

The organization is already looking to expand its enterprise. Morton said The Birthday Fairy plans to hold a Halloween costume drive to collect costumes for children who may not be able to afford one. She also said the volunteers are planning a “Christmas In July” toy giveaway this summer, and they have already collected more than 800 toys for that event. Both of those plans are still in development.

“We’ve done some really big things and I’m excited to see what happens even a year from now,” she said.

More information on The Birthday Fairy, including contact information, can be found at the organization’s Facebook page of the same name.

Morton said the volunteers at The Birthday Fairy “want to make kids’ birthday wishes come true.” And she said the work to make those wishes come true started with the dream she had in December.

“I took it as a message from God that this is what I’m supposed to do,” she said.