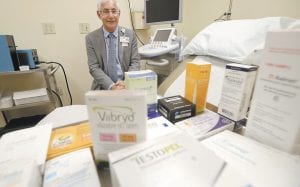 SEX DRUG PRICE HIKES — Dr. Irwin Goldstein poses in his office in San Diego behind a display of medicine for impotence and for sexual problems. For couples who can’t afford the soaring prices for the prescriptions, some take a big risk, buying “herbal Viagra” at gas stations or ordering Viagra online from “Canadian pharmacies” that likely sell counterfeit drugs made in poor countries, says Goldstein, director of San Diego Sexual Medicine. (AP Photo)

Imagine not being able to afford one of life’s great pleasures — sex.

That’s true for many older couples, doctors say. Soaring prices for prescription medicines for impotence and other problems have put the remedies out of reach for some.

“Many of them don’t get past the pharmacy counter once they see the price,” says Sheryl Kingsberg, a University Hospitals-Cleveland Medical Center behavioral psychologist and researcher who counsels men and women.

What people actually pay out of pocket varies. Some insurance prescription plans, including Medicare, cover some of the medicines. Some plans don’t cover any, arguing they’re not medically necessary. Many require steep copayments or limit the number of impotence pills per prescription.

“Once you get to a certain price point, sex becomes a financial decision,” says Dr. Elizabeth Kavaler, a sexual dysfunction specialist at New York’s Lenox Hill Hospital. “It takes a lot of the joy out of this.”

Five of six specialists interviewed by The Associated Press say patients have told them they’ve given up sex because of the cost.

Now, a little relief is coming. Late next year, Viagra and Cialis will get at least one generic competitor costing slightly less; prices will plunge later when more generics reach the market. For women, an Addyi rival is in late-stage testing. A few other products now have generic versions, and other options are in development.

Until Pfizer launched the first impotence pill, Viagra, in 1998, there were few options for men besides penile implants and injections. Viagra and Cialis each quickly topped $1 billion in global annual sales, and products for women’s symptoms eventually followed. However, price hikes appear to be limiting usage for some products in the U.S., where prices aren’t regulated.

Since 2010, the number of Viagra prescriptions filled in the U.S. has fallen 42 percent to about 5 million a year. Meanwhile, prescriptions for Cialis, which now has a popular daily pill option, have gone up slightly, according to health data firm QuintilesIMS.

Popular women’s estrogen products such as Vagifem vaginal tablets and Estrace cream also have seen prescriptions decline in recent years. Addyi, only on the market for a year, has had dismal sales.

“They go to their pharmacy and see how much it costs, and then they call me up and say, ‘I can’t do it,’” says Streicher, director of the Center for Sexual Medicine and Menopause at Northwestern University’s medical school in Chicago.

But not being able to have sex “is a deal-breaker in a lot of relationships,” she adds.

The drugs’ makers insist list prices far exceed the negotiated prices insurers pay them and say they price products based on their value. According to the companies, nearly all their customers are insured. Pfizer says most insured Viagra users pay $6 to $8 per pill, for instance.

Many shop for price, which can vary widely by pharmacy.

Some doctors have gotten inventive.

Dr. Nachum Katlowitz, head of urology at New York’s Staten Island University Hospital, offers an alternative costing about $1 per pill at some pharmacies. The active ingredient in Viagra — sildenafil — is also in Pfizer’s now-generic blood pressure pill Revatio but at one-fifth the dose.

One of his patients, a 62-year-old hospital technician, takes several of the blood pressure pills before sex.

“I couldn’t afford it if I had to pay for Viagra,” says Robert, who asked that his last name not be used to protect his privacy.

He’s experienced modest improvements and says he and his wife of 28 years now enjoy sex twice as often.