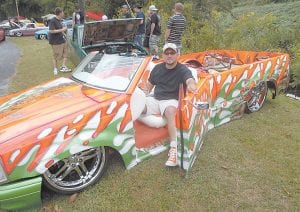 Steve Robinson of Galax, Virginia showed off his bright orange and green 1986 Mazda truck at the Heritage 2K12 Truck and Car Show in Whitesburg. (Photo by B.J. Johnson)

Automobile enthusiasts from as far away as Canada rolled through the streets of Whitesburg over the weekend.

They came to show off their vehicles at the Heritage 2K12 Truck and Car Show, which took place last Friday, Saturday and Sunday. The main staging area for the automobiles was the parking lot behind Food City.

An estimated 300 motorists participated in the 10th annual show, including Steve Robinson of Galax, Virginia. His 170-mile journey to Letcher County took 3-1/2 hours.

Robinson’s bright orange and green 1986 model Mazda truck was a real eye-catcher. He said he has been working on the truck ever since he purchased it more than 25 years ago.

Orange is Robinson’s favorite color. He painted orange flames on each side of the truck. On the back is artwork depicting Jesus carrying a cross.

“My wife and I are Christians,” said Robinson. “It was important for us to include religious art on the vehicle.” 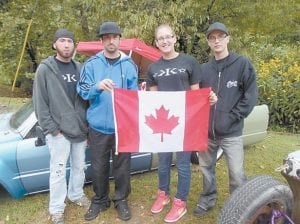 It took Will Wilcox, Geoff Fiander, Kaitlynn Adams and Justin Goodreau 14 hours to travel from Ontario, Canada to Whitesburg. They said they will be back for the annual car show next year with more people in tow.

About 50 yards away, four people from Canada proudly displayed the two mini trucks they transported all the way from the Toronto area.

It took Will Wilcox, Geoff Fiander, Kaitlynn Adams and Justin Goodreau 14 hours to travel from Ontario to southeastern Kentucky. The Canadians were not hard to spot, because they put up a red tent featuring a couple of maple leaf flags.

The four said they thoroughly enjoyed the event and plan to come back next year.

“Next time, we will bring a lot more people with us,” said Goodreau.

“Everyone has been so friendly and welcoming,” said Fiander.

Dozens of drivers paraded through Whitesburg in a cruisein on Friday night. On Saturday night, vehicles strolled down Main Street again but this time they performed — some of them setting off fireworks.

Whitesburg native Lee Michael Caudill started the event 10 years ago, but credits his father, Moun- tain Comprehensive Health Corporation director and CEO L.M. “Mike” Caudill, for coming up with the idea for the car show. 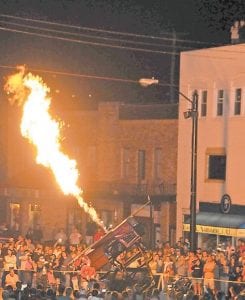 The fire-breathing show-truck Schizophrenia performs for the crowd in downtown Whitesburg on Saturday as part of the Heritage 2K12 Car and Truck Show. (Photo by Chris Anderson)

“We were coming back from a car show in Mississippi when he brought up the idea,” said Caudill. “I told him there was no way our small town would accommodate such an event, but I was wrong.”

Caudill said that in addition to the group from Canada the show attracted truck and car owners from Massachusetts, Delaware, Texas and several other states.

The money raised at the event will be used to help sponsor the Kentucky State Police “Shop With A Cop” program that provides Christmas presents to underprivileged children.