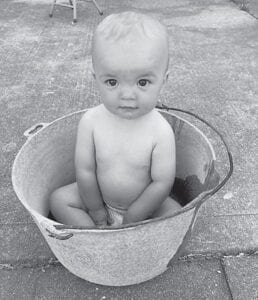 Hello everyone! I think summer has finally come to this little portion of the Ohio Valley area, as we have a few days of 90 degrees.

Oh no, I am not going to complain as I would rather have it hot any time than to deal with being so cold that I can’t get warm no matter how much I try to layer.

One day this week it was so cool in the house without air conditioning on, it was one of those days I wasn’t feeling well. I sat on the back deck in the sun to get warm, and after I started feeling the warmth of the sun, began to feel drowsy. I was afraid I would fall asleep, so I decided to come back in the house, and covered up in the recliner and fell asleep.

As I sit down to the computer trying to write this column, there’s so much going though my nimble brain I don’t know where to start.

I wonder if life will ever return to what we have known as normal? I thought my personal life was turned upside down on June 1, with the accident. Never dreamed this coronavirus would affect so many, killing thousands, closing everything except places to buy food, liquor stores, and abortion clinics, which must be an essential necessity. 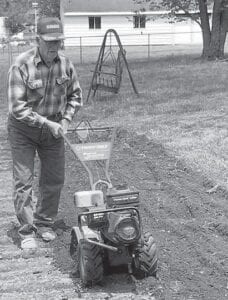 Johnny Calihan tilling up his garden on May 15. Johnny was 93 years young. “This is what the world needs,” says southern Ohio correspondent Rose Ballard, “more people like this man.”

A special thanks to all medical personnel in any part of the profession that you have chosen, especially nurses, for all you do.

Thanks also for those who are standing behind Plexiglas shields in groceries trying to stay protected while waiting on people that can be so rude.

I have meant to write this for some time, but my brain seems to go to sleep. For those who live anywhere close in Letcher County where there’s a business, please support it.

IGA in Isom will help those who can’t help themselves. From what I was told you can call ahead and your items are delivered to your car.

It is probably a little late for this announcement and I am very sorry. I’ve only stopped there a few times when I am back in the mountains. Gwen and the employees are always so courteous

Saturday was a beautiful day in our area. My son Keith Ballard is still working on the yard, and I am still out puttering around in the yard also. 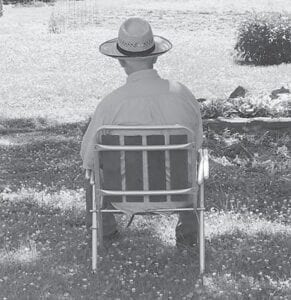 The impatiens that Keith bought by mistake weren’t filling out as fast as Keith wanted, so I made a trip back to Meijer’s to purchase three more trays of petunias. I replanted the impatiens close to the front porch, which meant the irises had to be pulled up and transplanted.

Meantime Keith decides to dig the irises along the fence, cut the irises back, replant, then put mulch, then spade up in front of the porch and the other side of the house to put in black mulch.

Keith has been off work for the past two weeks due to health reasons, now he is trying to kill himself working in the yard and take me with him. He cleaned the gutters, and now he is preparing to pressure wash the house.

I finally took a short break to watch a few as they drove into the field to find their parking place. Then there was a couple that really caught my attention. Keith decided to grab a bottle of water and take a break also. I said I would walk over and look at the cars, except I was afraid of stepping in an uneven place and falling, as I would love to know if a couple of the cars were ‘53 models plus I had seen a GTO that I was curious about.

Keith surprised me as he said he would walk with me. I did tease Keith to ask if he wasn’t ashamed to be seen walking with his mother at a car show.

By this time the temperature had really became very hot, and as we were walking across the field to the car show, I wondered if I had made a good choice. I am glad that I did go. One car in particular was a ‘53 Chevrolet with the original motor, oh the memories the car brought back of younger days. ere was a ‘53 Oldsmobile, Th even a Studebaker. Keith was a little surprised that I knew what it was even before we got close to it. Jack’s dad had several of these when we were first married.

Keith was amazed at an older Cadillac, which was one of a kind. There was several Camaros which Keith’s first car was a Camaro, when he turned 16.

Actually Keith decided he wanted a certain Camaro; one had been wrecked and needed part of a front end. Keith found another, so at the age of 16 he used parts from one Camaro to put on another.

Jack offered to help him find a newer car but Keith knew what he wanted to do, as he had helped his dad work on cars since he was a kid.

I must say I was disappointed as I have never seen a 1968 GTO convertible, nor a ‘53 Mercury at a car show. We’ve owned both over the years.

I had to laugh as I looked at the length of the ‘59 Chevrolet and the Bonneville Pontiacs, you could almost park two of my Honda Fit to make one of these.

In previous years, it thrilled me to drive a pickup truck, in fact we had an ‘88 long bed Chevy with a cap that I drove several times to the mountains of eastern Kentucky that I call home.

We had a couple of station wagons. The last was my ‘84 Chevy three-quarter van that I sold about three years ago as I began to feel uneasy driving it. It was a little wider than your usual van. When you begin to feel uncomfortable about something you better listen to your instincts.

Saturday was such a great day, then Saturday night continued to be wonderful also.

Due to music events being closed there have been several musicians who have been on the computer sharing their music. Tony Hale & Blackwater Band has performed two awesome shows. Words can’t really describe how much pleasure this brings to people to be able to at least enjoy this for a couple of hours.

It seems every time I watch it, I see something that I have missed in previous viewings. For those of you that haven’t seen this, if you have any roots at all to Appalachian ways you will enjoy Mountain Minor.

The thought of the possibility Carcassonne Community Center not being able to open this year is so hard to accept, as square dances are held March, through November, weather permitting.

Mike and Marcia Caudill, before summer is over I may be forewarning you, that you may have to get a pack of marshmallows, as you may find a little red Honda Fit parked somewhere on your driveway. As long as a bear doesn’t try to keep me company, I want to enjoy sitting by the firepit.

Not only does it take away the pleasure for many that attend, this coronavirus pandemic has affected musicians’ ability to have an income.

Sunday, Old Time Fiddlers resumed after two months, and we had really good music. It was a beautiful day, and the group got together at the cabana out back, as it was just too nice to be inside.

The only thing I forgot to ask about electricity being turned on, since I had made cornbread and a pot of soup beans. Even though it is warm weather, the beans were still warm thanks to the crockpot, and that didn’t stop them from being enjoyed.

With this being our first meeting in two months, I really didn’t know how many would be there. The musicians were ready to break loose, so they picked and the rest of us enjoyed.

Johnny and Ann Calihan are having a little setback, as Ann is having a lot of back pain.

Johnny is trying to raise a little garden. The half runner beans had come up good, but the deer must have been hungry as they ate the tops off the beans.

I wanted to sow lettuce, but for some reason in this area you couldn’t find lettuce seed. Mommy always sowed Black Seed Simpson.

Congratulations to Sue and Tom Wagner as they finally bought a house, which is not far from Johnny and Ann’s. They should be in their new home in a couple of weeks.

My daughter Anna Nottingham finally got an email that our trip to Washington D.C. was cancelled, which we already knew it would be.

I am glad no one but God can cancel the sunshine and the beautiful moon that has been out for the past few days and nights.

Hello to Les and Pat Wagner and all their family. Please keep Pat’s sister in your prayers as she is having serious health issues.

Hayward Day, I hope this finds you and Kim doing alright.

Hello to Buddy and Bernice Grubb. Buddy isn’t feeling his best at the present time.

Nancy Darien in Mesa, Ariz., I hope you received the book of The Beauty of A Rose.

I wish somehow we could vote in Kentucky, maybe two extra votes would help to ditch the Despicable Mitch.

Something is disturbing me very much. I got in touch with Letcher County Sheriff Mickey Stines to ask to whom I could turn, to see about getting the road fixed to the cemetery on top of big Branch Mountain.

Thanks, Mickey, as he was very prompt in replying. He told me to get in touch with Terry Adams.

I promptly called Terry Adams’s office, which Terry had left for the day. His receptionist, secretary or whoever she is, I didn’t write her name down, she promised me faithfully she would have Terry Adams call me. That was a week ago. I know being the county judge is an important position, this is just a small thing on a long list.

I am going to call back until I get some results. I know it isn’t important to a lot of people, it is important to those who have loved ones buried there to go pay their respects.

Well it is time to start another busy day. Until next time, Rose Ballard, 9110 Lawrenceburg Rd., Harrison, Ohio 45030.