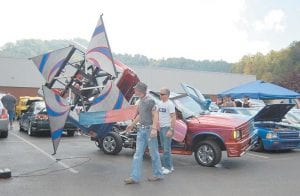 A popular attraction at the Heritage 2K9 car and truck show was “Schizophrenia,” a “radical bed dancer” converted by Jamie ‘Chaos’ Kelley, of Asheville, N.C., from a 1989 Chevrolet S-10. Kelley is pictured with Jim Eitl, also of Asheville. (Photo by Sally Barto)

A popular attraction at the Heritage 2K9 car and truck show held beside Mountain Comprehensive Health Corporation on Sept. 12 was a “radical bed dancer.”

Jamie ‘Chaos’ Kelley, of Asheville, N.C., transformed a 1989 Chevrolet S-10 into what he calls “Schizophrenia.” The “radical bed dancer” has a completely independent suspension and a seven-stage spinning/splitting bed. It also has a remote control flame-thrower that is capable of shooting a column of fire at least 12 feet.

Kelley said he has spent 18 years and $100,000 turning the truck into something different.

“I like something really different coupled together with action,” said Kelley. “As far as I know this is the only one that exists of this magnitude right now in the U.S.”

Kelley’s creation was one of about 300 vehicles on display at the car and truck show on Sept. 12.

Mike Caudill, chief executive officer of MCHC, and his son, Lee Michael, are the organizers of the Heritage 2K9 event.

Mike Caudill said he has received “a lot of comments on how great the community is and how great the support is” during the car and truck show.

Kelley said he will keep bringing his creation back to the Heritage 2K9 every year.

“It is one of my favorite shows to go to mainly because of Lee and his family,” said Kelley. “It is just genuine hospitality here. You don’t find that much anymore. Lee is just a great guy.”

Mike Caudill said between 3,000 and 5,000 people watched the Heritage 2K9 cruise in downtown Whitesburg on Friday night and about 5,000 came to the car and truck show beside MCHC on Saturday. An event was held downtown on Saturday night and an awards ceremony was held Sunday morning.

He said the weekend-long event is enjoyed by both local residents and those who live out of state.

“We had people come from St. Louis, Florida, Maryland, Pennsylvania, and all states in between,” he said.

Adam Palanker, of Phoenix, Md., was amazed by the Southern hospitality he experienced while in Whitesburg. He and his friend Jonathan Tobin, of Hampstead, Md., said coming to the Heritage 2K9 was worth traveling almost 500 miles.

Tobin and Palanker are planning on coming back next year.

A video clip of Kelley’s “radical bed dancer” can be viewed at www.themountaineagle.com.