Carbide once lit the way 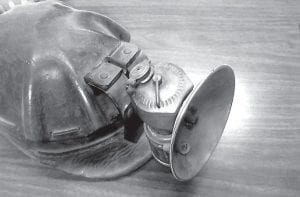 A carbide lamp attached to a miner’s hard hat. Note the leather bill on the hat.

People attending the West Letcher Oral History Society meetings frequently bring an old tool or other item for “show and tell.” One such event occurred recently when Elwood Cornett brought and demonstrated a carbide lamp.

A discussion of the local uses of carbide and carbide lamps followed the presentation by Cornett. At a meeting held a short time later, Tommy Combs gave an in-depth presentation of carbide.

Following is a summary of the discussions at those two meetings about carbide and carbide lamps:

Elwood Cornett explained that a carbide lamp has two chambers that can be separated. Lumps of calcium carbide are put into the bottom chamber and the top chamber containing water is screwed on to form an airtight seal. A lever on the top of the lamp is turned to start water slowly dripping onto the carbide.

The resulting chemical reaction in the bottom chamber between the water and carbide creates acetylene gas. This gas escapes through a tiny orifice in the center of the reflector on the front of the lamp. Many reflectors have a sparking device, similar to that on a cigarette lighter, which lights the flammable acetylene gas. Adjusting the lever on top of the lamp controls the size of the flame —and the amount of light. 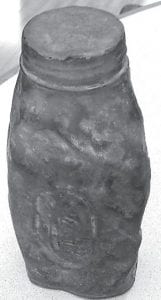 Note the dents in this old miner’s flask for extra carbide. The item is now owned by Stella Elam of Blackey.

Once the carbide in the lamp is consumed and the flame becomes feeble or dies, the bottom chamber is emptied and refilled with fresh carbide. Extra carbide is carried in a metal flask, roughly pint sized. Often the carbide in the flasks absorbs the humidity in the air and becomes caked.

Richard Smith explained that striking the flask sharply on a hard object dislodges the lumps of carbide, and that many old flasks are dented from such “whacks.”

Locally and elsewhere, carbide lamps were the main source of light in coalmines before the introduction of battery powered miner’s lights.

Allen Whitaker, an experienced coal miner who helped run a small truck mine in the 1960’s, said that 25-pound tin canisters of carbide were stored in each section of the mine for the miners to refill their flasks. Miners used water from their drinking supply to refill the water reservoir of the lamp.

Without light deep in a mine, the darkness is absolute. But sometimes a miner got so involved in his work that he would not notice his lamp’s dimming light until it was too late. In such cases, if he was working alone and his flask was empty, he had to bend over and use his hand to follow the rail to the nearest carbide canister. During the mid-1900’s, small railroads were laid back into many of the small mines, and the coal was hauled out on rail cars pulled by ponies.

Carbide lamps were commonly used outside at night as a light source before flashlights became readily and cheaply available. A carbide lamp was carried on many a nighttime trip to the barn or the outhouse. Hunters rambled through our local forests at night on coon hunts using carbide lamps.

While searching for a better way to make aluminum, Thomas Willson accidently discovered a process for making carbide commercially viable in North Carolina in the 1890’s. (The patent for this process was later sold to Union Carbide.) This process made carbide — and the acetylene gas that it produced — cheaply and readily available. Because acetylene gas produced a light far brighter than the coal gas commonly used for lighting at that time, the use of acetylene for lighting jumped dramatically.

Streetlights were switched to acetylene. Carbide lamps became the headlights on some early cars, trains, and bicycles and were used on riverboats for night navigation. The miner’s carbide lamp described above was invented about 1900.

After carbide lamps were implicated in a methane explosion that killed more than 50 miners in an Illinois coalmine in the early 1930’s, their use in mines began to decline.

Spelunkers — people who explore caves as a hobby — continued to use carbide lamps. Caves are not known for containing explosive gasses. The smoke from the flame can be used to mark directions on the cave wall. The markings are nontoxic and are removable. Unfortunately, the smoke is also good for graffiti that vandals leave behind.

For the first half of last century, a unique use for carbide was providing the light inside homes in areas where electricity was not yet available. The generator that provided the gas for the interior lights worked on the same principle as the portable carbide lamp described above. Water dripped at a controlled rate onto the carbide contained in a vat outside the house. The acetylene gas was piped to the lights of the house where it burned brightly. Without electricity, this was an economical way of furnishing indoor lighting, but the drawback was gas leaks and explosions.

Ernie Caudill stated in the March meeting of the West Letcher Oral History Society that his uncle Lonzo Caudill told of the Wilburn Hampton home at the mouth of Doty Creek near Jeremiah having such indoor lighting.

The next scheduled meeting for the West Letcher Oral History Society is pinned at the top of this page. The regularly scheduled meeting time is usually at 6 p.m. on the first Monday of each month at the Blackey Public Library, and you are welcome to attend and participate.

However, occasionally things do occur that require a schedule change, so check the Facebook page before attending.