By JOE WALKER The Paducah Sun 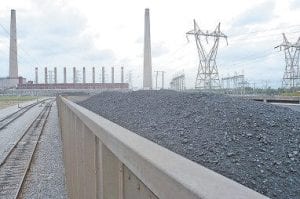 Coal is shown inside one of the train cars headed for the dumping area of the Shawnee Fossil Plant in Paducah, Ky. Power costs in Kentucky and Illinois would shoot up under federal carbon tax legislation targeting states heavily dependent on coal-fired electricity. (AP Photo/The Paducah Sun)

The nation’s third-leading coal producer, Kentucky would be the hardest-hit state for dollar increases for cooperative customers. Power companies would incur billions of dollars in added costs and pass those along to consumers.

Average monthly bills could go up $27 to $68, based on a projected tax of $20 to $50 per metric ton of carbon dioxide emissions, according to the National Rural Electric Cooperative Association. The provisions are being debated under a House bill similar to President Barack Obama’s proposed carbon tax, projected to raise about $80 billion a year starting in 2012.

The House bill increases equate to 26 to 65 percent for Kentucky cooperative customers, second highest nationally behind Utah’s maximum 70 percent. About 95 percent of the electricity produced in Kentucky is coalfired.

But rates could jump at least 40 percent for low-cost distributors such as Jackson Purchase Energy Corp. and Paducah Power System. Worse case, a monthly bill could double.

“Kentucky is one of the states being singled out because of being a heavy coal producer,” said Dave Clark, Paducah Power general manager. “Those states are going to get a hard kick in the pants.”

The Kentucky Public Service Commission is closely tracking the legislation, but there are far too many uncertainties to predict how much rates will go up, commission spokesman Andrew Melnykovych said. He said coal-fired plans are under increasing pressure to lower carbon dioxide emissions.

“Those are costs that could pass back to the consumer,” he said.

The 600-page proposal would establish a cap-and-trade policy, new energy-efficiency programs and a nationwide renewable electricity standard among other measures aimed at curbing global warming.

Specifically, the legislation would require 25 percent use of renewable energy by 2025. Supporters want to limit carbon dioxide emissions at 20 percent below 2005 levels by 2020.

Under cap and trade, power companies in states exceeding the limits could buy allowances from utilities in states that meet the standard. Among other things, utilities are lobbying to phase in the tax and renewable-energy requirements, rather than face them all at once.

The bill targets coal because 28 percent of all greenhouse gas emissions in the nation come from coal-fired plants, according to a 2007 U.S. Environmental Protection Agency study.

“My understanding is they haven’t looked at diesel fuel and other carbon dioxide emitters,” Nuckols said. “They’ve got the bull’s-eye on the lump of coal and are saying they’ll get around to the others later.”

Waxman’s committee held contentious hearings on the legislation April 22-24 in an effort to move the bill to Markey’s subcommittee for amendments. But an amendment session has reportedly been delayed amid concerns by Republicans as well as Democrats from industrial and coal-dependent states. Rep. Rick Boucher, D-Virginia, proposed giving 67 percent of the emission credits to the power industry, largely to local distributors and some to coal companies.

U.S. Rep. Ed Whitfield, RHopkinsville, a committee member, warned the group that cap and trade could cripple the Kentucky coal industry. He also said technology is lacking to meet the renewable energy goal.

Whitfield cited a recent study showing that in Spain — a model for renewable-electricity standards — 2.2 traditional jobs were destroyed for every green job created.