Caregivers in need of help 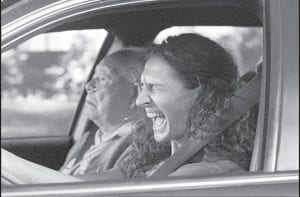 This frame screen shot from video provided by AARP and the Ad Council is from a new public service announcement illustrating the frustration that family members can feel as they struggle to care for aging loved ones while holding down jobs, raising children and taking care of their own health. The campaign is to raise awareness of family caregivers and point them toward resources that may ease the strain. (AP Photo)

A woman grips her car’s steering wheel and silently lets out a scream as her frail father, on oxygen, coughs beside her and her kids play around in the back seat.

The frustration portrayed in an arresting new public service announcement is recognizable to millions of Americans who struggle to care for aging loved ones while holding down jobs, raising children and taking care of their own health.

“I take care of her, but who takes care of me?” says another one of the public service announcements from the nonprofit Ad Council, which is distributing the ads for TV, radio, print and online use. It’s part of a major campaign from AARP and the Ad Council to raise awareness of the impact of family caregiving as the nation rapidly grays — and to point overwhelmed families toward resources that may ease the strain.

“Most caregivers don’t know where to turn for help,” said AARP vice president Debra Whitman, whose own family has experienced caregiving twice, for her grandmother and her mother-in-law.

Even knowing what to ask can be a hurdle. That’s what Andrea Phillips of Alexandria, Va., discovered when her mother, now 74, visited from Chicago a few years ago and got too sick to go home. She recovered from a heart problem only to be diagnosed with early Alzheimer’s.

Phillips, a lawyer with 1- and 4-year-old daughters, raced to find nearby senior housing that her mother would accept and could afford. But already she’s having to cobble together additional care as the Alzheimer’s worsens. She says her mother skips her prepaid meals in favor of a cookie stash, misses medication despite Phillips’ daily takeyour pills phone calls and is embarrassed to find herself struggling to remember and perform personal hygiene — the kind of day-to-day issues that health providers didn’t address.

“I do constantly feel that I’m playing catch-up,” said Phillips, adding that she feels guilty when she gets frustrated. “I’m trying to find the right resources so Mom and I can continue to have a good relationship.”

Although they often don’t identify themselves as “caregivers,” more than 42 million Americans perform some form of consistent care for older or impaired adult relatives or friends, according to a 2009 estimate. It can range from paying bills, to driving Mom to doctor appointments, to more handson care such as bathing, and even tasks once left to nurses such as the care of open wounds.

“At first you’re just helping out Mom. Then it can become more than a fulltime job,” said AARP’s Whitman.

She described the average U.S. caregiver as a 49-year-old woman who on top of her regular job provides nearly 20 hours a week of unpaid care to her mother for nearly five years.

An AARP report found family members provide a staggering $450 billion worth of unpaid care annually — and other research makes clear that the stress and the time involved can take a toll on the caregivers’ own health and finances as they put off their own doctor visits, dip into their savings and cut back their working hours.

Adding to the challenge is that more and more people are living well into their 90s, as Census figures show the oldest-old are the fastest growing segment of the population.

Consider Oona Schmid’s father, who is 96 and has advanced dementia. The Arlington, Va., woman has overseen his care for a decade, since her mother died — and said she could have better planned how to pay for it if only someone had warned her how long people can live with dementia. She said the bill at her father’s assisted-living facility has reached nearly $8,000 a month as he now needs round-the-clock care.

“I don’t think he knows who I am, but he still smiles when he sees me,” Schmid said. She choked up as she described the pull she feels between her responsibilities to her father and to her 3-year-old son, fretting that there’s no money left to set aside for her son’s education.

Schmid, 41, works fulltime, pet-sits for extra cash and is exploring options to save on her father’s care.

“Maybe this is a terrible thing to say but I’m terrified of how long he’s going to live and how much it’s going to cost,” she said.

Like Schmid’s father, very few Americans have purchased private, and pricey, long-term care insurance, and Medicare doesn’t pay for that kind of care.

The ads direct people to AARP’s website — www.aarp.org/caregiving — to find information and services from that organization and others — a one-stop starting point for resources.